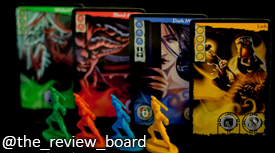 The Lord of Nine Hells walks the earth.

Wu-Feng, the Lord of Nine Hells, has discovered the village hiding the funeral urn containing his ashes. Four Taoist priests protect the village, as hordes of ghosts and demons descend on the town to reclaim the remains of their evil overlord. Can you hold out against the forces of eternal darkness, or will Wu-Feng recover his ashes and destroy everything in his path?

In Ghost Stories, the players work together as the Taoist priests attempting to turn back the tide of evil and save the doomed village. With mystical powers and ancient martial arts, the heroes will battle wave after wave of ghosts and demons until Wu-Feng himself rises to claim his remains. Working together is your only hope, as the ghosts increase in number and force the Taoist priests to sacrifice resources, time and even their very lives in this desperate battle against the hordes of Hell.

Best Coop Experience
This is my absolute favorite cooperative game, if not my favorite overall. While defending your village against a seemingly never-ending army of ghosts led by the evil Wu-Feng, you will have to make many decisions--all of which will seem viable.

Because many of your decisions depend on some amount of luck from the dice, the game becomes a combination of careful risk mitigation and total glory when you succeed a roll that absolutely should have resulted in the village's demise.
The dice allow the game to never feel solved, which is a problem that some other coop games seem to have.

While this game is generally considered to be one of the more difficult coop games out there, you may find that after many plays you have achieved a decent rate of victory. If so, don't worry! The game has several absolutely stellar add-ons to consider!

The White Moon expansion adds in the idea of saving village families, who may give you a very powerful reward if saved, or a devastating punishment if they fall to the ghosts. I have played with this expansion 5 times, and have not managed to beat it yet. It is an EXCELLENT addition to the game.

The Black Secret expansion adds the option for a 5th player to control Wu-Feng, the evil ghost causing all this trouble. I have not actually managed to play with this yet, but as a die hard fan of this game I will absolutely pick this one up.

When you've exhausted those, there are many promotional cards and other items available from the game's publisher, Repos Productions. I bought all of those and added in many new incarnations of Wu-Feng, two scenarios modifying White Moon, and new village tiles to aid in your fight!

This is just an amazing game with absolutely fantastic artwork, I seriously cannot recommend it enough.


Review by Luke on 10/19/2015
Who you gonna Call?
This game will pick you up, get you pumped with awesome art and cool monk figures. Then it will smack you around and call you a sissy when it beats the living snot out of you. If you cant tell this game is HARD.... HARD HARD HARD.

Did I mention its hard? Wow! But don't let that frighten you off. This game is fun. It is beatable. With a little luck some smart planning and teamwork you can pull it off. And thats the thing, you will want to try again.

This game is a FANTASTIC addition to any collection. Easily within my top 100.

Go ahead and pick up the expansions.... you will need to extra abilities for your monks.... YOU HAVE BEEN WARNED!!!

Review by Bowden on 10/6/2015
Send them back to Hell
Ghost Stories is an extremely hard cooperative game. We never-ever won. Never seen Wu-Feng himself.

On the other hand it's a really great game, You will spend a lot of time discussing what to do, which ghost to exorcise, how to manage Your tao tokens, which village power to use.

I really recommend it to those who like coop games.