"In Eregion long ago many Elven-rings were made, magic rings as you call them, and they were, of course, of various kinds: some more potent and some less. The lesser rings were only essays in the craft before it was full-grown, and to the Elven-smiths they were but trifles yet still to my mind dangers for mortals."

- Gandalf, The Fellowship of the Ring

Celebrimbor's Secret is the fifth adventure pack in the Ring-maker Cycle.

Of the Rings of Power, only the Three crafted by Celebrimbor were never touched nor sullied by the Dark Lord of Mordor. Having suspected Sauron's evil purposes, Celembrimbor gave them to three Elf-lords who hid them through the ages and used them to resist the Dark Lord's influence. Should he recover the One, Sauron will command all the Rings of Power, even the Three, and he will be able to undo all the good that the Elves had created with the Three. Fortunately, though, Sauron does not have the One, and he does not yet have the means to undo the works created from the Three.

The sixty new cards in Celebrimbor's Secret introduce a new scenario, in which Middle-earth's heroes must search through the ruins of Ost-in-Edhil, even as they are beset by a host of Mordor Orcs that have somehow made it to the ruins ahead of the heroes. But even as you stand against the Orcs, you'll gain new strength from the adventure pack's player cards, which lend greater strength to the Silvan and Noble traits, as well as the Doomed X mechanic. You'll also be able to call upon a new hero, one who has closely guarded Celebrimbor's secret for hundreds of years.

This is not a stand-alone game. A copy of both The Lord of the Rings LCG: Core Set and The Voice of Isengard expansion are required to play. 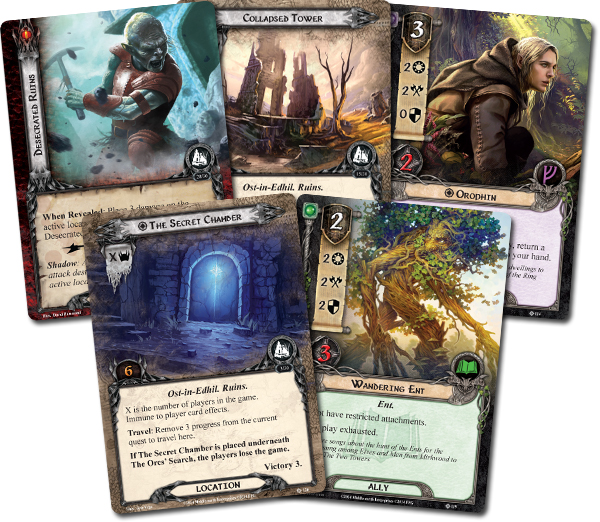