Up to 50% OFF Select Talisman Items | Shop Now
Tweet

Battle for Control of Corellia!

The Empire's hold over the galaxy is absolute, but even the ancient Core Worlds are not immune to the spark of rebellion. The Corellian Sector's key hyperlane routes and shipyards prove a tempting prize for the Rebel Alliance, and the restive populace chafes under the Imperial yoke. But the Empire will not let such a vital sector slip from its grasp, and dispatches its fleets to thwart the Rebels' plans!

Join your friends in open warfare to decide the fate the Corellian Sector! The Corellian Conflict campaign expansion for Star Wars: Armada allows you and up to five of your friends to wage an epic campaign spanning multiple fleet battles. Take sides with the Galactic Empire or the Rebel Alliance, then vie for key hyperlane routes, seize vital shipyards, and establish new bases. Victory depends on your team's ability to control vital worlds while crushing your foes in battle!

This is not a stand-alone game. A copy of Star Wars: Armada - Core Set is required to play. 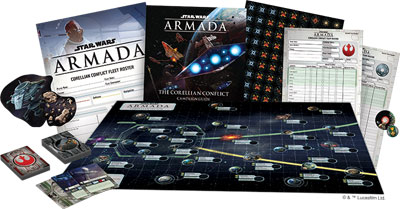