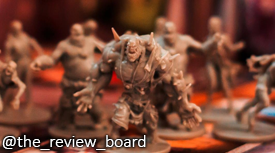 Zombicide is a collaborative game in which players take the role of a survivor - each with unique abilities - and harness both their skills and the power of teamwork against the hordes of unthinking undead! Zombies are predictable, stupid but deadly, controlled by simple rules and a deck of cards. Unfortunately for you, there are a LOT more zombies than you have bullets.

Bullets, blades, cars, you name it, the only way out is Zombicide!

Good to start
The basic box is very good, but I prefer the most updated versions because they contain new types of zombies.
Review by Roberto on 3/24/2018
Great with a group!
This is a very fun and challenging co-op game. It's quite addictive to play and the components included with the game are of superb quality.
A few minor issues can arise during gameplay, but nothing that a simple house rule can't bypass. set up time can be lengthy compared to some simpler board games, and if you're playing with "non gamers", they can easily be out of the game quickly, so watch out for that.
But overall this is a great game especially if the genre is to your liking.
Highly recommended.

Review by Joe on 6/2/2016
One of the best games of all times
This has got to be one of the best games I have ever played. Some may think that the price is kind of high but they are forgetting how much stuff is packed in the box. The quality of the miniatures are top notch and are worthy of paint. If you are a zombie fan like me then you can't go another day without this game. It is fun and very easy to learn.
Review by Uncle Death Lord on 4/12/2016
Perfect!!!
Great minis , fun and engaging gameplay , expansions for DAYS. My groups favorite title by far. Also the first set I took the time to paint. Easy to learn and teach and so much fun to play. This started a WHOLE obesession with tabletop games for me. At the time (newly into tabletop gaming) the price scared me a bit. More than worth the scratch. Top notch production gameplay and replayability. I HIGHLY recommend Zombicide.
Review by Keltz on 11/2/2015
Great Zombie Slaying Game
My friends and I got together last weekend and I pulled this game out, we were only going to play one game and we ended up going through 5 missions and playing until 5 in the morning! Great coop game, great leveling system. Lots of fun, worse part is that you won't want to stop playing!
Review by marcin on 10/26/2015
a lot of fun
game play is fun and with so many different survivors and zombie types, added to the many campaigns this game does not get redundant. This is a great way to enjoy a stay home night. My wife enjoys this game. Thats how much fun it is. The survivor experience upgrades also adds to the game play. Highly recommend.
Review by Phillip on 10/16/2015
for me one of the best board games ever
This is really funny to play, the quality of the pieces is very good, one game can stay for hours without becoming boring, all the characters are cool, except for Ned, he always dies.
Review by Lokness on 10/15/2015
Prepare your shelter
Do you like zombies? And kill them all??? This is the game for you, and the better thing is that you can play solo, with 100 Zoooombies...
Review by Leandro on 10/13/2015
Loads of fun with the right people
If you've got a group of gamers that enjoy pushing miniatures around or zombie apocalypse survival games then this is the game for you. As other reviewers have stated, this game replaces Last Night on Earth. That game is permanently benched now that i own Zombicide.
Review by Mark on 10/1/2015
Fun coop game
Great game. Lots of missions and great replay ability. The miniatures are well made as are the tokens. The rules are easy to learn. There is a lot of setup involved but we'll worth fighting hordes of zombies.
Review by Christopher on 9/21/2015
AWESOME GAME
Hands down my favorite game, decently priced and you never have to play the same mission. Most games you repeat but not this 1.Awesome game!!!
Review by Corey on 9/19/2015
The game that started the infection!
Survival horror for 1-? players. This box is a solid value with 9 heavy duty double sided board tiles, (for infinite configurations) 2 decks of mini cards and tons of great minis. Gameplay is not deep and luck will come into play, but I have yet to play a game that recreates the reality of the zombie apocalypse any better. Being the most basic of the 3 starter seasons this box is your best bet to test the waters and see if you have what it takes to sort out the mess our world has become!
Review by Thomas on 9/8/2015
Lots of Fun!
Can't think of a board game we have played more since this came out.
Review by joshua on 5/5/2014
Expensive, but worth it
Zombicide is my new favorite zombie game. The rules are easy to learn and the game can play quick; some of the scenarios can take a while to complete as they require lots of exploring and lots of wandering. The one thing that can make the game really challenging is the number of hits to kill a player character, two; some of the scenarios require all the players to survive so you have to be careful. The Toxic Mall expansion eases this frustration with the introduction of Zombie-Survivors so the game is slightly more forgiving.

The game is a bit on the pricey side, but you do get a ton of plastic figures and quality pieces.

Review by Jeremey on 11/25/2013
Great game... challenging and fun!
Best Zombie game on the market today. Initially take your time and get the rules down. It is challenging and fun! Success and survival require total team play / cooperation or you will fail. Kinda like fighting that zombie horde for real! Four players is perfect! Do recommend you buy one extra set of zombies, and when you do, only add one set of cards. That will maintain game balance. Enjoy!
Review by Wayne on 8/29/2013
Great game but $$$
I'm a big Last Night on Earth fan and love this game. It is different though from LNOE as in this the focus is much more on a high body count, action and it is cooperative. The differences are enough that I see both being played in my future. There are significant expansions and a Season Two stand alone which can also be an add on on the way in August from the second kick starter finished earlier this year.
Review by Ken H on 5/19/2013
Very Good w/ lots of great mini's
I like the game alot, missed the kickstarter but am glad I got this one! Played a couple games last night.. I like that you can play it alone or up to 6 people!
Review by Lumpy on 2/1/2013
Such a blast to play
I've always been a fan of Last Night on Earth. However, Zombicide is the new zombie game of choice.

It's easy to learn and easy to teach--though there are some subtle tactics to be discovered within the rules. It is as mission-based system, allows for great flexability, and even has a (downloadable) map builder. The online support from Guillotine Games is what every gamer wants from a gaming company--trust me, there is some effort going into supporting this game.

The quality of the components is excellent, especially the minis--in fact, it's worth getting just for the minis!

I admit that I did cring a bit when I first saw the price, but was hopeful after hearing all of the buzz from those that supported the Kickstarter or bought copies at GenCon.

After I recieved my own copy and had a chance to look over the components and get a 1/2 dozen games in, I was very happy with my purchase!

If you are still on the fence, read other reviews of the game. Also, go to the Guillotine Games website and check them out for yourself.