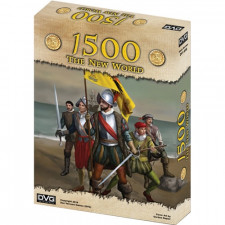 I like DVG as a company, and 1500: The New World sounded right up my alley. A short area control game with tactical take-that gameplay may not appeal to some, but for me, I like a game that can give me a sense of building a tiny empire and wiping out my opponents in less than an hour. With a short and sweet setup that lets you get right into the action, it seemed to be tailor-made for me. And I'm not afraid of a game that lets you throw some sand in your enemies' eyes a bit.

Sadly, 1500 does everything in its power to prevent the player from feeling any sense of connection with his empire. A typical turn consists of playing out your hand to maximize your presence on the board and counting up your points. On your opponents' turns, they'll then completely wipe you off the map, forcing you to almost start afresh each and every turn. This overemphasis on the tactical at the expense of the strategic is a critical misstep, as you never feel any sense of accomplishment, since you know you'll be wiped out by the time your next turn rolls around. Your gains don't feel like gains, and your losses can be shrugged off as you'll just build somewhere else next turn. 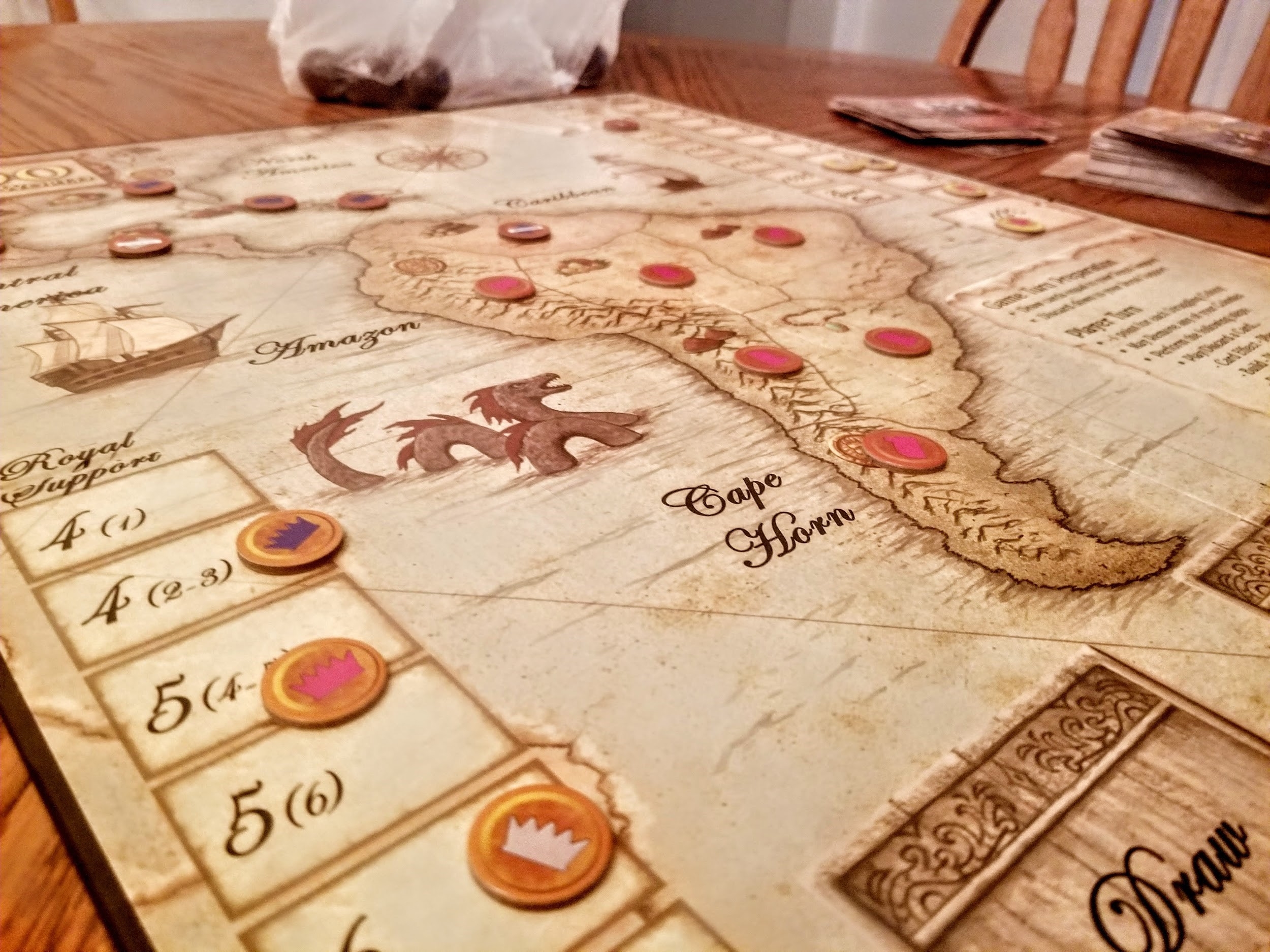 A fleeting moment of victory for pink, which will certainly be wiped out by his next turn.

I enjoy games with spatial aspects: Risk is fun because you can consolidate your territory and eyeball what you might conquer next turn. It also has an ebb and flow in play where each player expands and then gets beat back on their turn, but it makes sense in the context of the game. The spatial element of the game means you can make a good guess as to where your opponents might counterattack and where you might try a brutal backstab. There is none of this in 1500, since colonies can be built pretty much anywhere. The board is almost an afterthought.

This means the play is also highly unthematic, with colonies popping up and getting whacked down only to pop up again the following round. Am I the Spanish, the French, the British? The game doesn't seem to know or care. There's just no attempt at historical approximation whatsoever, even in some weird alternate timeline or anything like that. And frankly, while I'm not opposed to playing a well-thought-out treatment of the colonial period, a game that treats it with this little care is just distasteful. Compounding the problem is the wild discrepancy in the power of the cards. Some cards can claim nearly half of the new world in your name, while others are situational in nature and thus far less useful. They do have multiple uses, so you can usually toss a junk card or two in order to build up your hand size next turn or build a lone colony. But these alternate uses pale in comparison to the might of the best cards in the deck.

Finally, there is a huge turn order problem. The first player is prone to getting ganged up on by the other players' reaction cards, since everyone has a full hand when his go comes around. Passing turn order around or tweaking the timing of refreshing the players' hands could have fixed this problem, but the rules as written mean player 1 is gonna have a bad day every time 1500 hits the table. 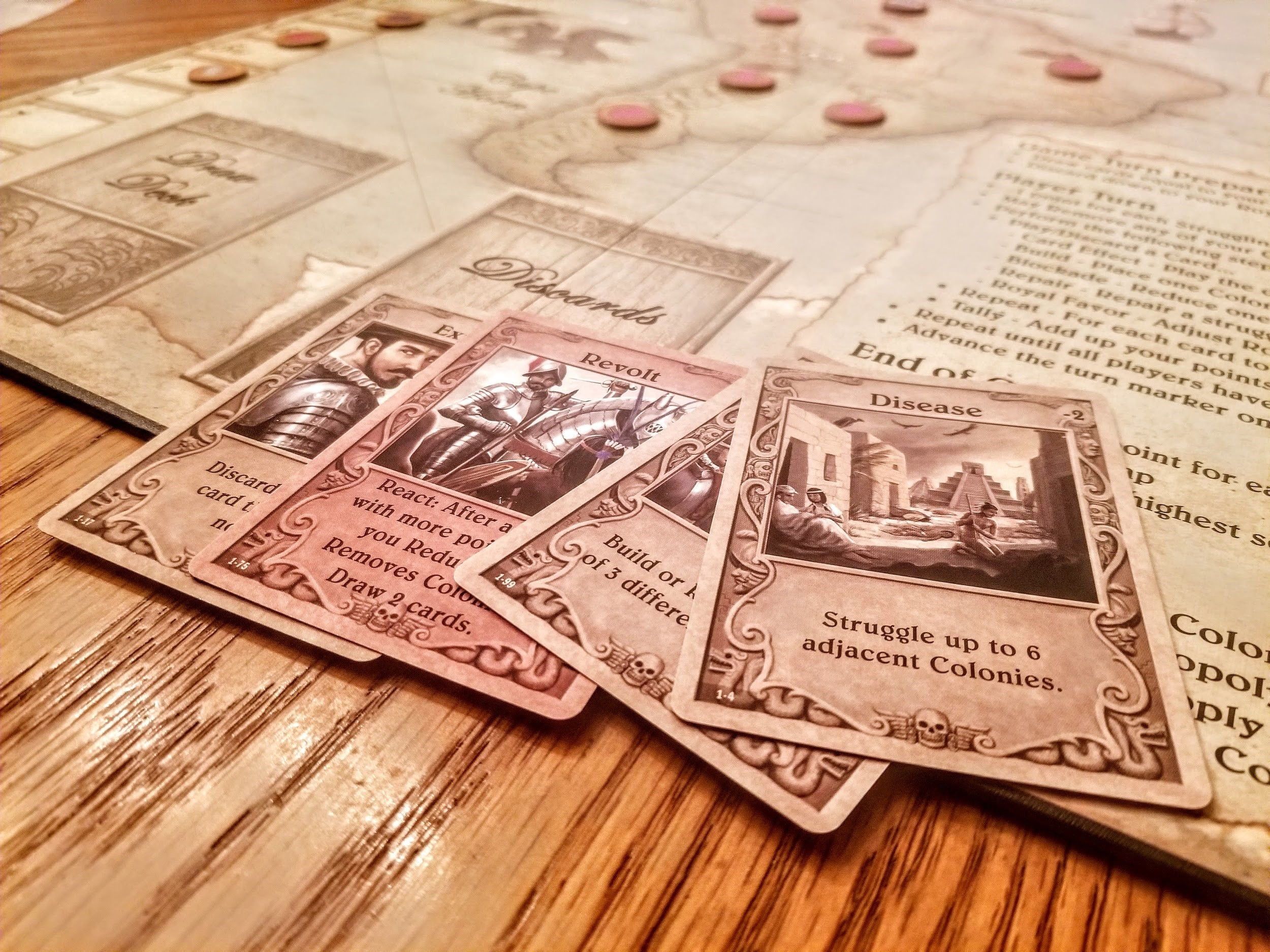 Play some take-that cards and hope you come out on top.

Not that it matters much, anyway, since the outcome is so highly dependent on the card draw. If he draws well, the first player might indeed win he day, regardless of any disadvantage in going first. Draw cards, hope they're good, play them to maximum effect, twiddle your thumbs until your turn comes 'round again: this is the entirety of the 1500 experience. I suppose there's some room for soft alliances and agreements, but in a game this thin and wonky, I'm not sticking around for a metagame to develop. Munchkin with a map is not something I need in my life. I'll play a fun take-that game for 30 minutes and move on with my life, or I'll play a thinky Euro area control game for an hour or two and have a much better time than any session of 1500 could offer.

The game's also uneven in its presentation. While DVG has never been a high-end game company in terms of production, they've certainly put out better than this. 1500 has dull clip-art tokens in garish colors, though they are spread across an attractive map. But the nice depiction of the Americas isn't enough to save the overall watercolor aesthetic. 1500: The New World is a stinker, and I can't recommend it to anyone. There are better area control games, there are better short take-that games, and there are better colonial games, and all of them do just about everything better than this one.