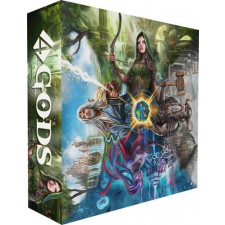 Christophe Boelinger, Carcassonne, and real-time games are three things that completely rock my socks. That is to say 4 Gods had a lot going for it before I ever cracked the box. It certainly helps that it's one of the more unique designs I've played and it's all snugly wrapped in pleasant and evocative artwork.

This is a real-time tile laying game where players are competing for the most Divine Influence-a fancy sophisticated version of victory points. Tiles consist of terrain that must be connected to like features on existing board elements. You have to place plains to plains, water to water, etc. Just like Carcassonne it's intuitive and easy to grok.

So you're throwing down tiles in a thoughtful yet manic way, when all the sudden Ben grabs the God of the Dwarves. Ok, no sweat, now you kind of want to limit the scope and potency of mountains on the board. Then you notice out the corner of your eye Sara taking the Goddess of the Elves. Damn pointy-eared hooligans.

You throw caution to the wind and nab the God of the Humans, leaving Aerial and the Merfolk to Jimmy.

One of the best features of 4 Gods is the ability to determine your faction mid-play. You can grab a set of small plastic prophets and the corresponding god tile at any point, but if you leap too early you'll be thwarted. Too late and you get stuck with the runt of the litter. This is compelling because it gives player agency and enables an en media res kickoff with baked-in asymmetry to the most important phase of the game.

Once you grab a god you can start placing the plastic prophets on terrain features you deploy. The tiles you occupy don't actually have to correspond to the terrain that matches your god (more on that later). It's Carcassonne-like area control yet you can deploy to an established terrain group even if an opponent already has a figure there. There's some great nuance in that tiles occupied by prophets don't count in end game scoring either. Thus, if you push an area and get in an arms race it will devalue the whole.

This real-time controlled chaos ultimately lasts about 30 minutes before end game scoring occurs. Here's where your choice of god influences the tally as you count up the most of each type, as well as gauge the size. If there are more mountain groups on the board then the God of the Dwarves makes out like a bearded bandit. Similarly if the single largest feature is a massive lake, Aerial is doing victory laps. This is tiered and second/third place in both of these categories are doled out that precious Divine Influence as well. 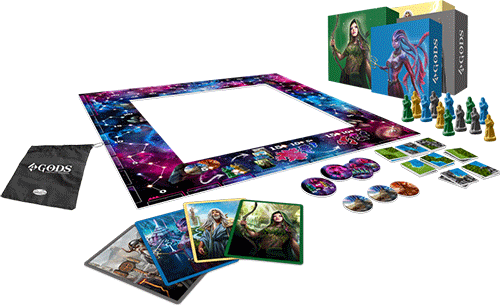 Intervention. The divine variety, not the A&E show.

This game has several different options to play, including turn based and hidden god selection. Don't give in and slow things down; 4 Gods is at its best when it's just frantic enough as player arms get in the way of the board and you're fumbling with tiles. It's energetic and unique which pulls you back to the table and draws your attention.

The feel is particularly interesting because it maintains a fine balance. "Speed kills" is a phrase you often seen muttered by hockey analysts and highway patrolmen, but here you really want to be thoughtful. Flying by the seat of your pants with manic aggression will result in failure more often than not. You want to be just fast enough to maintain your cognitive sharpness and beat Jimmy to the punch.

With that being said, perfection isn't quite thrown out like candy corn when it comes to board game design, and 4 Gods is unfortunately not almighty. One element I haven't touched on yet is these legendary cities that players can deploy. These monuments don't have to match a tile feature and they earn the owner five Influence at game's end. What really sells the concept is the fact that you can blow up other players urban retreats if you can place a tile legally in its stead. Boom, toss the opponent's prophet in the celestial dumpster and claim the city as your own spoil of war for a nice suite of pointage.

The Legendary Cities are great because they inject drama as well as an additional vector to score. The problem is that they can sometimes be used to cut off expansion, since they are harder to legally build off of. The way the board grows means the corners tend to jut out and push into no man's land first, and a city placed in such a position can act as a road block.

There's risk there that the concrete jungle will be blown up, but you can guarantee safety if you place tiles so that certain incongruous features line up at the corners. This happens slightly more than I'd like and this cuts the momentum out of play. Fortunately, this doesn't happen extremely often but it does keep the design from reaching its maximum peak.

With a game like 4 Gods I can't help but give it more leeway to stumble a little. Innovation is more important than perfectly smooth play and I'll happily take a blemish as the cost for an incomparable identity. When a game reaches in and warms the pit of your stomach it does wonders to melt the rough edges away.

4 Gods is the type of design that requires a chance. It's weird, unique, and hits with several new concepts that are wholeheartedly worth exploring.