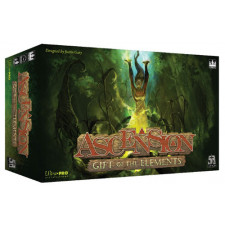 Ascension: Gift of the Elements Review

Iâ€™ve played a lot of Ascension. Like, seriously, a lot. The thing that keeps me coming back, game after game, and set after set, is that every time I sit down to play, I get the chance to build the most efficient and satisfying deck I can. And there is nothing like whittling away all of those garbage starting cards until youâ€™re left with the leanest, most perfectly tuned deck that makes you giddy to play your next turn. The latest standalone Ascension release, Gift of the Elements, is an all-access pass to banishpalooza, however this isnâ€™t the only thing this set offers. As with every new expansion, the core of the game remains the same â€“ spend money to acquire new cards and use attack to defeat monsters â€“ while adding in a new mechanic or two to keep things fresh. In Gift of the Elements, we see the introduction of Empower and Infest.

Empower effects go off when you purchase a card from the center row, allowing you to banish a card from play. Thatâ€™s right. You can have already spent a card and then dump it afterward, allowing you to take full advantage of those weak Apprentices or Militia in a â€œhave your cake and eat it tooâ€ kind of way. As though this wasnâ€™t useful enough, some cards have effects that go off when theyâ€™re banished, which includes when you remove them from the center row. Need an extra two attack? Banish that Shadow Elemental for your convenience. 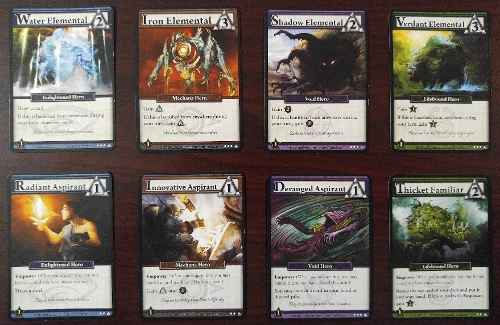 Multiple kinds of effects from banishing.

Relative to Empower, Infest is a less exciting new mechanism. Infest is found on some of the monster cards and, when they are defeated, you can choose to place them in an opponentâ€™s deck, or even your own. The purpose of placing them in your opponentâ€™s deck is fairly obvious: clog up their deck with useless cards. Weâ€™ve seen this kind of thing in other deckbuilders, making it somewhat of a surprise that Ascension took this long to include something similar. Admittedly, this mechanism can be rather annoying, so you always have the option to place the monster in the discard pile instead. As for why youâ€™d want to place the card in your own deck, there are two reasons. First, one card (and only one card in the whole set) allows you to banish certain types of monsters, allowing you to acquire/defeat any card in the center row. Secondly, there is one event (and only one event) that lets you treat monsters at +2 attack when you play them. This is handy if the timing lines up, but not something you can actively plan for. 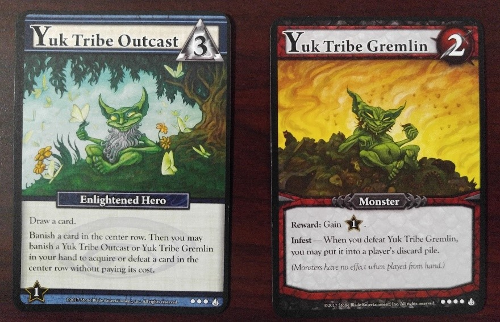 A crazy combo if you can pull it off.

And this leads us to the last major feature in Gift of the Elements: events. Weâ€™ve seen events before, but itâ€™s been over five years (Storm of Souls first introduced them in 2011 and Immortal Heroes added some new ones in 2012). Events affect the game in a variety of familiar ways (e.g., reduce costs, draw extra cards, etc.), but this time they include another mechanism from the past: Transform (originally seen in Realms Unraveled in 2014). For a cost of 8 money or attack, you can transform events into powerful heroes that get added to your deck. Unfortunately, this outrageous cost is hard to achieve. In all my games of Gift of the Elements thus far, weâ€™ve only seen these transforms happen twice. The event usually ends up getting wiped before someone can save up enough for it. So, itâ€™s a fun pipedream to go for, but donâ€™t expect it to be attainable on a regular basis. 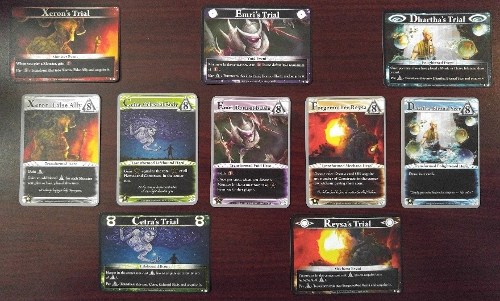 Events with their transformed counterparts.

For fans of Ascension, grabbing this set is a no-brainer. Itâ€™s actually a bit of a welcome addition as it has a kind of simplicity seen in earlier sets, making it an easy one to mix in with some of your favorites. This may allow it to have a bit more longevity and more play than some of the previous sets, which are harder to mix (such as Dreamscape with its additional currency or X: War of Shadows with its day/night tracking). At the same time, Gift of the Elements is not going to change anyoneâ€™s mind about Ascension as itâ€™s mostly just more of the same. Itâ€™s always hard to predict how a set will shake out among the array of expansions, but for now Iâ€™d put Gift of the Elements solidly in the middle. Itâ€™s like a new item at Taco Bell that tastes pretty good, but ultimately you know itâ€™s just another combination of the same 5 or 6 ingredients used in all the other items. This isnâ€™t a bad thing. I will gladly play Gift of the Elements and prefer it over other sets; it just hasnâ€™t made the lasting impression that I thought it would. Still, I hope future sets continue bringing back old mechanisms remixed in new ways. Sometimes thatâ€™s more exciting than new and different.