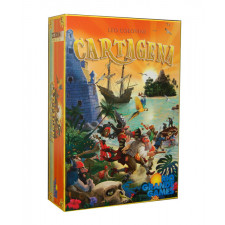 Cartagena is seventeen years old, and a lot has changed in the board gaming hobby in that time. Back then, The Settlers of Catan was still just an underground hit, Board Game Geek was in its infancy, and German game design was dominating the hobby. If that makes me sound somewhat nostalgic, that’s intentional. Playing Cartagena in 2017 is a little like hearing a song by Jerry Lee Lewis on a modern Top 40 radio station. Of course that’s not necessarily a problem. Board gaming these days has a short memory, and we’d do well to keep old favorites in print. What is in question is whether Cartagena is really worth the trouble in the first place.

Cartagena will feel almost primitive to modern gamers. First of all, it’s a race game. Race games are among the first games we learn in our lives, making Cartagena feel a bit like a song set to the tune of a nursery rhyme. It’s also quite a simple game. Players hold a hand of cards, and they need to move their pirate tokens to the end of a prison to escape on the waiting dinghy. When you play a card, you can move one of your tokens to the next available spot showing the icon on your card. If there isn’t one left, your pirate can move all the way to the dinghy, and that’s one away. When all of your pirates get there, that’s the end. 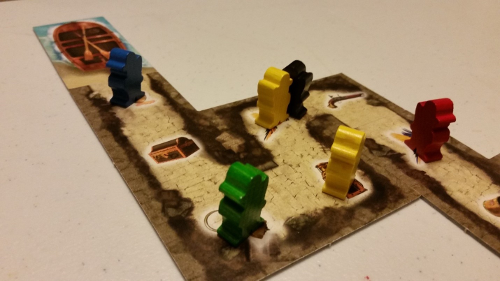 In hindsight, it probably was not a good decision to leave the dinghy right by the exit.

Eventually you’ll run out of cards, and when that happens you’ll have to move one of your guys back to the first occupied space behind you, drawing cards based on how many tokens were there already. This is the central tension of the game. It’s all about hand management. Are you best served spending those cards now to take advantage of a situation that will move up your guys, or should you drop back to draw a couple more cards?

As the central decision of the game, it’s a surprisingly difficult choice at times. That’s a good thing, because there really isn’t much else going on here. Eventually it falls into a rhythm of players using cards to rocket ahead to the next available space, and then taking small steps backward to replenish their hands. In a longer game, this would get old in a hurry. Fortunately Cartagena is a lean 20-30 minutes, but even at that duration it feels a bit repetitive. 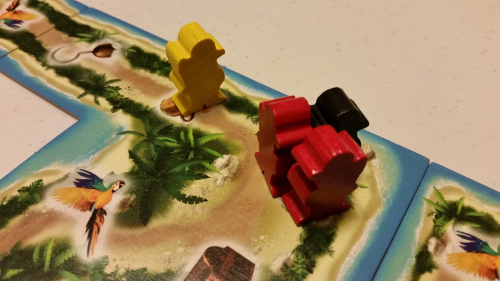 One annoyance is that the other players feel somewhat disconnected from the hand management aspect. The other players exist as a way to take up spaces on the board so that the card play is more interesting, but it doesn’t really force the players to play with each other to any great extent. In fact, it has one of my great annoyances in games, where the key is to try not to set up the next player too well. You might want to jump to a nice space way down the track, but doing so will allow the next player to go even further. Often this is not a choice between a couple pretty good choices, but between doing something constructive and nothing useful.

I’m pretty ambivalent toward Cartagena, though my feelings are perhaps not as negative as I’m writing here. My time with Cartagena has been mildly enjoyable. But as an experience it is essentially vapor, passing through the players and out of their minds just as quickly. It’s a pleasant vapor, but all of these little annoyances, its extreme simplicity and annoying habit of forcing you to set up the next player, not to mention its stubborn refusal to engage with its pirate setting in any meaningful way, add up to something that has a very low ceiling.

At least Rio Grande has done right by this little game. This new version of Cartagena is definitive, for whatever that’s worth. Fans of the old game will like the new illustrations, which sell the pirate setting as hard as they can. There are also lots of different variants included in the box, ranging in interest from “who cares” (flip the tiles over for an identical race on an island instead of a prison) to compelling (force players to pass between the prison and the island on the dinghy). It is these variants that show the real value to Cartagena in this form. These are what will keep the game from being instantly forgotten. 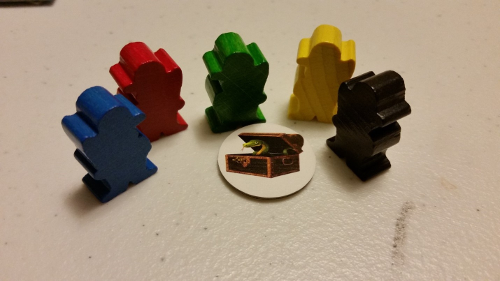 Anyone know how we can remove this snake to see what else is in this treasure?

The last couple of years have brought us some nice reprints of good games from the German game boom, a trend that I applaud. But if we’re looking back for games to reprint, Cartagena is a deep cut indeed. If you are looking for something that you can play with first-graders or at family reunions (and I don’t mean that disparagingly) that’s where Cartagena will work best. But the truth is that it’s not even the best choice in that class. It’s a pleasant enough game, but it shows its age.