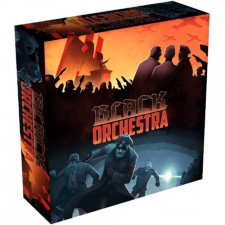 Black Orchestra is a cooperative game set in the early stages of Adolf Hitlerâ€™s infamous rise to power in Germany. Playable from solo or up to five players, you will become a famous figure from history in order to complete a daunting task, assassinate Hitler.

Designed by Philip duBarry and published by Game Salute and Ludonova, Black Orchestra will test your ability to work together and allocate your actions in order to plan and execute dangerous plots. The game follows very accurately the timeline of Hitlerâ€™s rise and the flow of World War II. 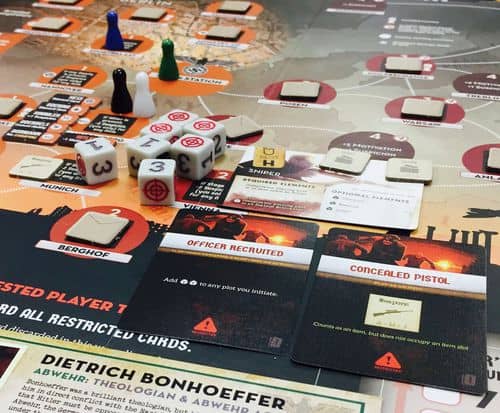 As you begin, you will play as one of the â€œSchwarze Kapelleâ€, known as the Black Orchestra some of which are high ranking members of the Wehrmacht within the Reich or even regular loyal German citizens.

You will also start with very little motivation and uncertainty and cannot even attempt a plot as you must build up the drive and confidence to execute plots in order to kill Hitler. You will need to gather various resources, plots and action cards in order to accomplish this goal as well as using the conspire action in order to increase your teams motivation as well as lowering Hitlerâ€™s military support in order to succeed in your various plot. 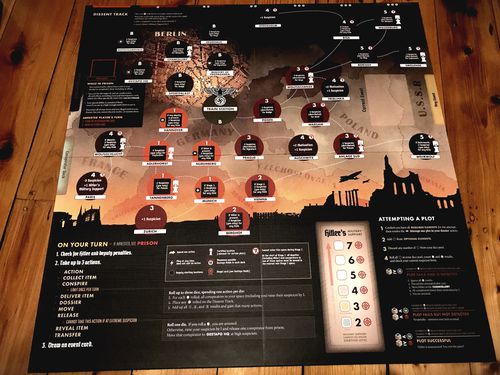 There are quite a number of different plots you can attempt ranging from a hidden bomb, sniper fire, poisoned food, to even de-railing the train Hitler is traveling on. To succeed in one of these plots you much rolls successes equal to or greater than Hitlerâ€™s current military support level as well as not rolling more eagles, which count as failures than your suspicion level allows.

While you are traveling across the map you have to avoid Hitler and his many deputies. They will make negative effects happen if you begin your turn in the same location as any of them. 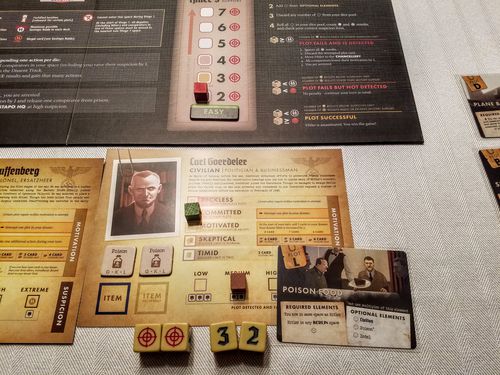 The game plays over seven stages of World War II and follows famous important events throughout. If you push your luck too much you risk failure, however, if you play too carefully then you will possibly miss a crucial opportunity to pull off an assassination plot. Another thing you need to be careful about is your suspicion level.

If the event Gestapo raid comes up, then all conspirators with a high suspicion level are immediately arrested. If you are in jail on your turn you will have to draw and read to yourself one of the random interrogation cards. These cards are kinda mean and selfish as in order to gain your freedom you kinda have to betray your team. Alternatively, someone else can attempt to break you out of jail but if they are caught, off to jail they go.

As with many co-op games, there is one way to win, yet multiple ways to lose in Black Orchestra. If you wait too long and the war gets to stage seven there is a card called documents discovered which causes an instant game loss. If all the players are in jail, you also lose immediately. So there is a great bit of push your luck involved in this game.

The harsh difficulty could put some players off but once you get the hang of things, itâ€™s quite a rewarding experience. My game group has roughly a fifty percent win ratio. The game is tough but I really enjoy the challenge and team building it presents to us.

So if you love historically themed games as well as a challenging co-op, then this game is a must have for game night.