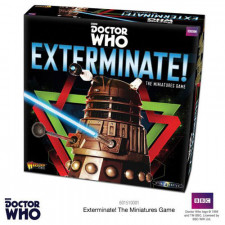 I am going to be more charitable to Warlord Games' new starter set for their Doctor Who: Into the Time Vortex miniatures game than I probably ought to be. I couldn't help but get excited about Exterminate, as the box set is called, because I am a serious enough Doctor Who fan to own every single episode- yes, all 50 years' worth- on DVD. But the fact is, there's never been a definitive game with this license released to date, and we're all waiting to see what Gale Force 9 does with their shot at it with their upcoming adventure game design. 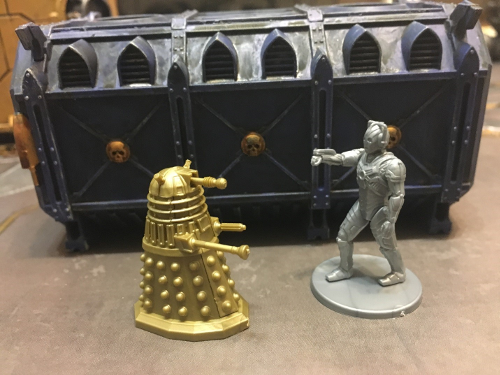 "WHERE IS THE DOCTOR?"
"IN AN EXPANSION SOLD SEPARATELY."

Warlord is a full-on English miniatures games company (they do Bolt Action and Beyond the Gates of Antares among other historical rules sets and models). And this is a full-on miniatures game, which has been attempted before in the Doctor Who setting because, well, it's just kind of a British thing to do. This is a fairly easygoing rules set that is just a little north complexity-wise of Heroscape and still quite a few tiers below even the latest edition of 40k. It's standard move-and-shoot stuff but with a light suppression mechanic, some cardplay, and custom dice for icon-based resolution. The starter set comes with 12 Cybermen with a handful of Cybermat drones and, as you might suspect, 12 Daleks. You also get the necessary recruitment cards which provide their stats, abilities, and other information along with all of the tokens you need.

The 28mm models are molded in silver and gold, respectively, and look quite decent without a lick of paint. They snap together easily, and with the included playmat and punchboard terrain you can be up and running with it quickly- provided you can make sense of the three separate booklets, which are to be honest quite badly organized. They also have several confusing and even contradictory rules. To say the rules are a little shaky is sort of an understatement. For example, there is a callout box that states that should you choose to use a tape measure rather than the included measuring stick to determine the width of a shot corridor, you should use the width of the tape measure you are using. I have tape measures with several different widths, so I suppose I should use the widest one for the greatest advantage?

As far as the gameplay goes, it's solid but it's also not necessarily reinventing the miniatures game wheel. Dice rolls are based on the range of the weapon (which can be doubled for a -1 die penalty) and then you determine if the shot is obstructed (another -1 die penalty). Die results for the to-hit roll are either explosions or misses on all other icons, unless you have an Energy weapon which also hits on a lightning bolt. The target rolls for defense, claiming cover (+1 die) if they can, looking to cancel shots with armor icons. Anything that is not blocked goes to a damage roll, which can result in a model being shocked, unfazed, or eliminated. There are also melee rules, with a very Warhammer-like method of prohibiting models from moving into base-to-base contact prior to charging and attacking when they are within two inches.

There is also a card play element. You can play from your hand of five to add icons to your result, forces rerolls, or block everything. There's not a wide range of cards, but having a hand of extra armor or hits can help you pull off a clutch action. I like this because it adds a slight strategic element to all of the buckets of dice you will roll. 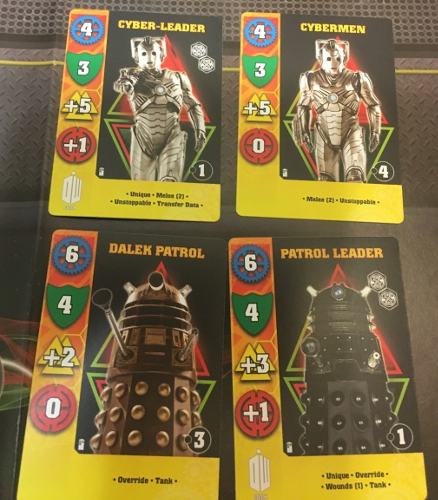 Oddly, there is no army-building difference between bringing a Recruitment Card with 1 model and one with 4.

There are a few scenarios included, almost all of which either explicitly or implicitly call for terrain or units that do not come in the box. The basic scenario is VP based, with players attempting to recover Vortex Nodes placed on the board. These are worth random VPs (1-4) and a few allow the player to take an extra shot or move when you grab them. You also get points for exterminating enemy models and there are some faction-specific VP parameters as well. For example, Cybermen exterminating units in melee "upgrade" them, and earn extra VPs. Daleks get bonuses for exterminating characters.

Now, here is where it gets especially dodgy. Those characters- including the Doctor- are not included in the box. So the very cool-sounding solo scenario, which requires the Doctor and some companions, isn't playable out of the box. And then there all of the Adventure cards, which are sort of special event/special action cards, and many of them are either completely unplayable with the Cybermen and Dalek factions or just don't make any sense. A Dalek with a sword? Just no.

I'm fine with the fact that the set comes with cards for some of the additional factions you can buy and in fact I like that. I like looking at the Judoon or Zygon cards and knowing what to expect if I decide to pick up a few. But what I don't like is feeling like I'm holding an incomplete game and it is not hard to feel like that here when the game is giving you half of the material that you have to buy elsewhere. To make matters worse, if you want Missy or Davros- and if you are interested in this game you do- then that means buying expansion sets that include MORE Cybermen and Daleks respectively that are not different from the ones in this box. And you will likely have more than you'll ever play with. This is a fairly low-cost set, and it is a complete blunder that it did not include at least the 12th Doctor and Clara Oswald along with the aforementioned villains even if it meant pushing the MSRP up by $20. 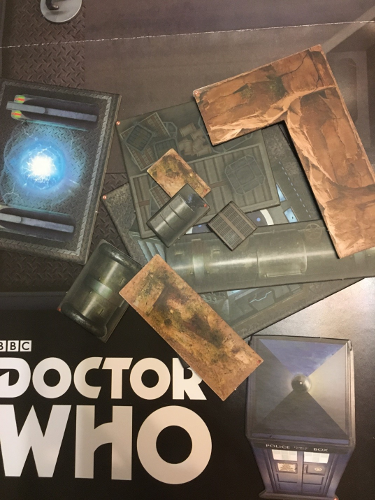 This would all be fine if there were enough of it. OK, the TARDIS would still be pretty crap.

It's also a total miss on the included terrain. After seeing the neat fold-up terrain in the Infinity box set and even the box-is-the-terrain from the budget 40k and Age of Sigmar starters, the punchboard stuff that isn't even enough for the included 3'x3' mat just doesn't do it for me. I appreciate the double-sided mat and it's something I may continue to use with the game, but here again I'd rather have seen this game come in for $20 more and offer more starter value for the buyer.

Sadly, this game is kind of a mess. Its heart is in the right place, but the balance is everywhere and it comes across as a sloppy product from top to bottom. I'm not quite sure why the best they could do to make the Doctor awesome was to give him an overpowered melee weapon (the Sonic Screwdriver?), and there are so many questions and issues that come from such a simple rules set that it beggars belief that someone at Warlord, a seasoned and well-respected company, didn't say "hey guys, let's let this bake a little longer and maybe get some broader playtesting." It's very telling that almost half the playtesters listed are also listed with design and editing credits and at least two share a last name.

Yet here I am, giving it three stars on our Review Corner scale. I'd go so far as to say that one of those is purely my Doctor Who Fan Charity Star. I don't think there is much here that would appeal to those who don't know the 3rd Doctor from the 7th so I would caution the mildly curious to stay away from this quite poorly presented product. The problem is that this is a decent and fun to play game with a great license that simply needed more time and effort to reach its potential. I'd love to see it regenerate into a second edition with significant improvements.