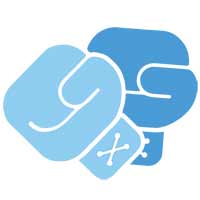 MB: I can't say that I was expecting Necromunda to re-emerge from the depths here in 2017, even though it had been widely rumored and presaged by the virtual reprint of the classic skirmish game as Shadow War: Armageddon, complete with vintage 2nd edition 40k rules. But that was released practically on the eve of 8th edition, and now all but the great Sector Mechanicus terrain that boxed game spawned seems to remain. But Underhive is a fundamentally different product than Shadow War was, re-introducing the gang warfare concept along with all-new miniatures and presenting the content in two ways. This is a fully featured hybrid board game with miniature game trappings and a terrain-based tabletop game that actually requires a separate rulebook (the Gang War supplement) along with plenty of three-dimensional terrain.

CT: That's an odd combo, huh? Usually when a product attempts to cater to two audiences it simply doesn't work. Splitting resources and rule book real-estate between two different vectors is a challenge. Sacrifices need to be made to support both and usually you have a tepid creation that doesn't do anything particularly well.

MB: But surprise, this is both an awesome guys on a grid style game (albeit with measured, freeform movement) and a great miniatures game that has all of the catwalks and falling you could want. I’m actually finding I prefer the “Zone Mortalis” mode over the classic Necromunda “Sector Mechanicus” game. 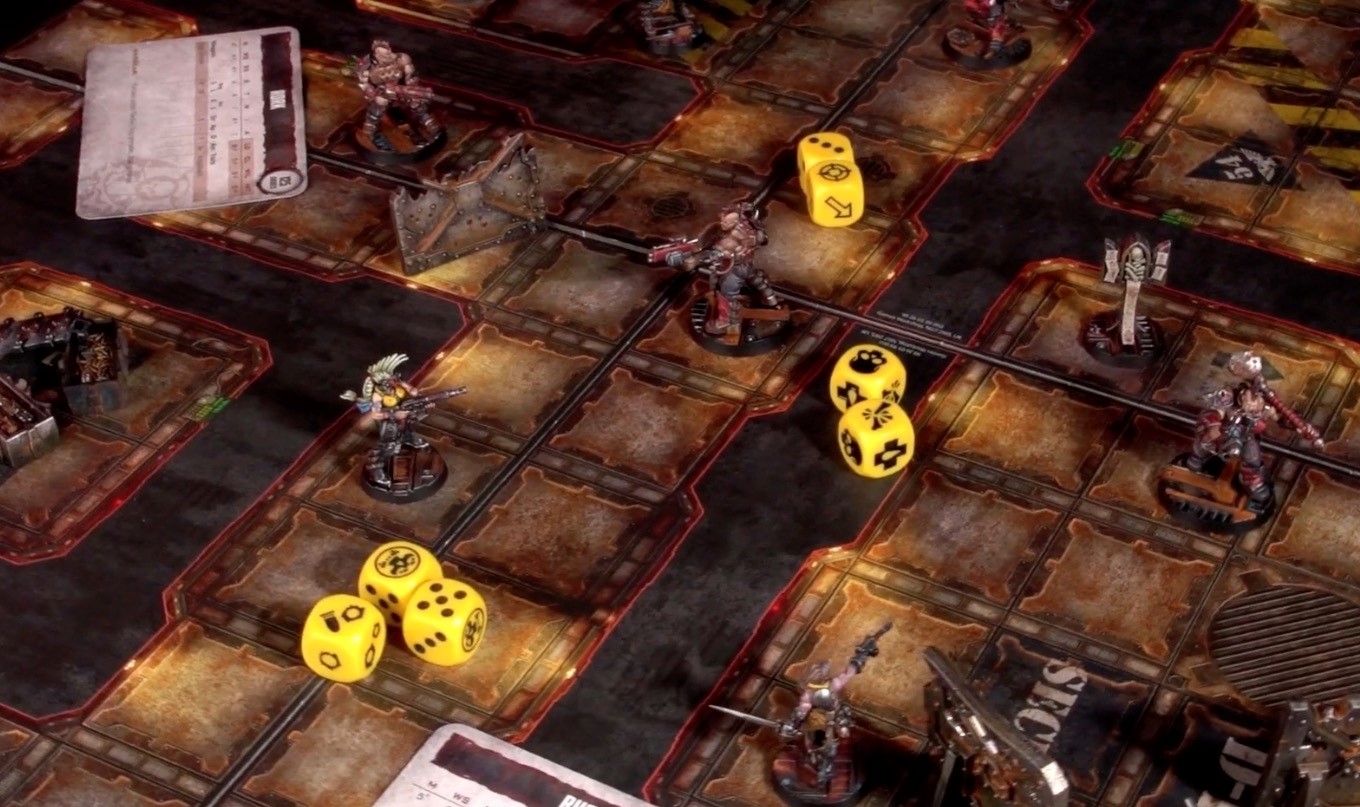 CT: This may not exactly be Necromunda in body but it sure as hell is Necromunda in spirit. I can't express how worried I was to find the vertical terrain removed from the core box, a de-emphasis on heavies, lack of overwatch, and only two gangs featured. All of that immediately put a sour taste in my mouth. Then I played a game and that all went away. I was slinging plasma, firing slugs, and cursing at the mohawked piece of scum down the tunnel. It's hard to imagine how damn immersive this version of the game is without experiencing it first hand.

MB: OK, so first game. Jelena, the Escher leader, runs up to get in position in front of a closed door, estimating that Brokk and his Goliath buddy won’t be able to move to it and take a shot. She’s wrong. They play an action card called “Rigged Door” And it opens. Brokk blasts her and she’s not injured, but she is pinned and knocked back 1”. She stands up and blasts Brokk with her combi-Bolter, opting for its rapid fire mode. He gets hammered by it; even though she only rolled one hit on the rapid fire dice- presumably she’s still seeing stars. Brokk gets pinned and takes 2 damage but shakes it off with another action card. Nokomi gets activated due to Jelena’s leadership ability and blazes the Goliath with dual laspistols, killing him outright with some lucky rolling. TL;DR, this edition of Necromunda has all of the ridiculous narrative and fun drama it always has, but some streamlining and modern elements (such as those action cards) bring it up to date and enhance all of the good stuff.

...and the Sector Mechanicus game that the Gang War supplement makes available.

CT: Absolutely, those are the moments that make you come alive. I really enjoy the new tactics cards which allow you to pull out some of those crazy tricks and unsuspecting narrative flourishes. By having a hidden trick up your sleeve, you can sort of throttle the drama and really pull off a wild swing. It feels pretty stellar.

MB: You know, what’s funny is that I was worried that simplifying things like injuries- doing away with the really specific sorts of things- would cost the game its character. But by minimizing some of those elements- and by bringing in some of 8th Edition 40k’s streamlining- I think the drama and the wild swings occupy more game time than rules work.

With that said, this is still a fairly complex game. Much like the new 40k, the core rules aren’t that difficult to internalize, but all of the detail such as weapon types, wargear and a few advanced rules add a lot of weight. But it’s good weight, because that complexity buys you a very Necromunda experience- and that’s something I’ve been missing for years.

CT: I agree for the most part. While we're both huge fans of this release, I do have one pertinent criticism. The only issue I have with the game is the decision to part out classic 'Munda into a string of supplements.

MB: Well, I can understand that but by the same token, it’s not that much different than any other way that GW supplements their releases. The Gang War book, which is very good, adds a lot of that classic material but if you do want to play that way, it is sort of abrasive to have to buy a separate book. I’m enjoying the Zone Mortalis game more than the Sector Mechanicus version, and I’ve got a few hundred dollars‘ worth of the terrain. And I don’t play campaigns often, so it really kind of suits me. But I like that I can set up games to play among the catwalks and Promethium Refineries as well as in the tunnels beneath- it's cool that the two game types are really different settings, which incentivizes playing both. And somewhat justifies separating the rules. And the Gang War book is really neat- there are some awesome campaign elements that have me practically begging my game group to commit to a few weeks of playing through it so we can watch our gangers (at least the good ones) grow and develop. You're getting into a whole different level of depth with the game at that point, and Gang War brings that to the table if you want it.

CT: I'm fine with separating the campaign and 3D terrain rules into a separate supplement, but it's difficult really getting deep into this game when it may take a year to see the full gang roster hit the streets. Word is the Delaques, my gang of choice, will be the final group released in quarter four next year.

MB: And I’m waiting for Cawdor myself. You are correct that right now, it feels limited but it should be noted that GW has stated that they will push out rules for the legacy gangs- and we will likely see Genestealer Cults and more than likely Chaos Cultists added via White Dwarf soon.

CT: It's already been officially stated that Gang War 2 will contain rules for the Orlocks and Scum/hired guns. A consistent drip of material isn't terrible as it does keep the game relevant and alive, but I can't help but already wince at the difficulties in managing a bunch of manuals down the line. To look up and reference all of the rules for your gang you may need to go to three or four books and that's going to be a drag. I'm worried it will begin to feel overreaching and bloated like X-Wing has finally become. 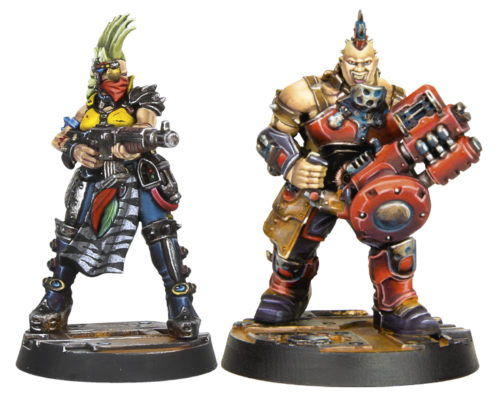 So many mohawks it looks like an Exploited concert.

MB: That is a great point and it should be noted that some of the releases, such as the hired guns you mentioned, are likely to be through Forge World- which means expensiveness to come. In terms of bloat we are talking about book bloat instead of card bloat. There again, it’s really not any different than the Codex racket though. It’s just how miniatures games tend to be sold. I think where that becomes egregious is where this edition of Necromunda feels like a board game- another add on already announced is a new set of boards. But I do wonder if the trickle of material you note is going to be detrimental- if we only have 4 main gangs with miniature releases six months from now and two books, will people move on to something else instead of waiting for the game to develop further?

CT: I think this game will remain alive due to a combination of nostalgia and a genuinely stellar tactical game. I think it's positioned to sort of land between the specialist titles like Warhammer Quest and Gorechosen, and the flagship lines of 40k and Age of Sigmar. That's not a bad thing, of course, as people will get a chance to play Necromunda on their own terms. Patience is really the defining virtue the community needs to maintain and it certainly helps that the design is worth it.

MB: Absolutely agreed - 2018 has been a blowout year for GW and this is for me one of the year's very best gaming products from any publisher - a tremendous tour de force that updates a classic game for a new generation.