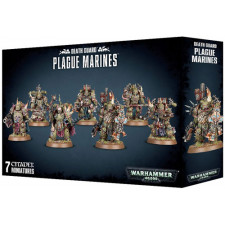 Critical Misses: You want two Plasma Guns, kit comes with one; modifying away from the set instructions can be a little difficult.

Those gnarly Plague Marines in the Dark Imperium set were just the beginning. The core Death Guard troop choice is now available in a seven model box and it is overall an outstanding set with lots of weapon options, if not posability or versatility. And they've done that thing again where you can take more weapons of a type than are included in a single box, which is especially irksome when you want to want to field a squad with more than one Plasma Gun or Melta. So right out of the gate here, you are going to want two boxes of this set if you really want to explore the possibilities available.

But even with one set, you get seven very cool figures that feature the full laundry list of CAD-assisted details that Citadel has been packing onto Death Guard sprues. Teeth, horns, tentacles, antlers, bells, maggots, tongues, bits of wood, chainmail, and the rest are all over these guys. The instructions give you seven "this one or that one" choices but I found that in order to make my two sets into one squad focused on ranged attacks anchored by two Blight Launchers and a Plasma-wielding champion and an all-melee stabby/smashy gang, I had to get a little creative with my builds. Further, you really want all of these miniatures to look different- there isn't anything uniform about them. So judiciously picking and choosing from the assortment of heads, chest plates, arms, and weapon models can go a long way into creating unique figures.

That does require a little more modeling than those who might be coming to this kit from the push-fit figures from Dark Imperium, so be warned. That said, if you follow the directions as written they are very easy to build. Either way, I think this is a really fun kit. Painting, like most Death Guard stuff, actually isn't as difficult as you might think looking at the godlike 'Eavy Metal paintjobs. Investing in a can of Death Guard Green spray and then doing the detail work after a wash and you'll be surprised how cool these look with even just modest talent at the brush.

Plague Marines are capable of forming the core of your Death Guard army's troop choices and they start at a five man squad at 7 power or 95 points. This is pretty darn expensive for a battleline unit, so it is likely that most lists will field them alongside Cultists, Poxwalkers, or other units. I like to pay the extra cost to take my squads up to 7 (because Nurgle), and I like to tailor their loadout based on what I'm up against. With the Plague Marines from Dark Imperium, one of the Easy to Build kits, and two of these boxes I have a lot of options. I can do a full-on melee squad or I can run squads focused on anti-armor or anti-infantry roles.

They are quite good at anything you set them to do, and I've been surprised at their efficacy in close combat- models armed with dual hand to hand weapons get an extra attack and the Plague Weapons (as well as Disgustingly Resilient) always help. The Flail, with its carry-over wounding is just as good here as it is with the Blightlord Terminators and the Great Plague Cleaver packs a mighty wallop- and it looks really cool. Regardless of what stabbing and shooting elements you decide to stick on them, Plague Marines are an excellent kit and any Death Guard player will relish exploring the possibilities it offers.