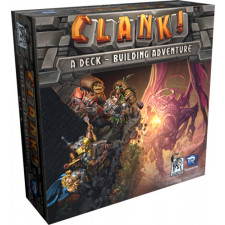 Youâ€™ve heard the premise before in no less than a million movies, books, and board games: youâ€™re going into a treasure-hoarding dragonâ€™s lair to try to retrieve some of his loot. Only the bravest or smartest adventurer will make it out to tell the story andâ€¦ blah blah blah. YAWN. I know. But stick with me for a minute because Clank! is absolutely worth rehashing this classic setup.

In Clank!, you are an intrepid thief delving into the depths of a lair where, of course, a dragon lays in wait. Your mission is to grab as many points in artifacts as you can and make your way out of the lair before the surrogate Smaug wipes you out. In typical deckbuilding fashion, you start the game with basic cards, then acquire more. The cards you buy and play will provide you with movement, money, and attack, which will allow you to move through the lair, buy more cards, and fight monsters, respectively. All in all, this sounds pretty standard. However, what Clank! brings to the table is its eponymous mechanic: clank. Every time you clumsily trample around the lair, you cause clank. Mechanically what this means is that when you play certain cards, you must contribute cubes of your color to the designated clank area. When the dragon attacks, which occurs when a card with the dragon icon enters the row, all clank cubes go into the bag and are drawn. If your cubes are drawn, you take damage and, with a measly 10 HP, you canâ€™t let this happen too many times. After all, youâ€™re no mother of dragons. 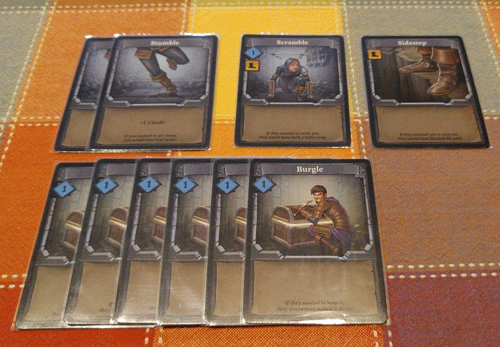 Remember: no matter what the flavor text says, â€œIf they wanted to keep it, they would have nailed it down.â€ is not a legal defense.

Clank! is very much about grabbing the loot and running. You might not have time to delve to the bottom for the best treasure. Just settle for the golden bananas and get to steppinâ€™ because that dragon is getting angry that youâ€™re pilfering his (assumedly) hard-earned bling. Each time an artifact is picked up, the dragon advances on the rage track, causing more cubes to be pulled from the clank bag. Although the bag starts with neutral black cubes, those slowly start to come out over the course of the game and get replaced with more and more of the playersâ€™ cubes. This ramp-up means the tension keeps building throughout the game. You hold your breath with every pull from the bag. Each revealed cube is met with relief that youâ€™ve managed to avoid another hit or a mad scramble to strategize how youâ€™re going to make it out with only 2 HP left.

Clank! is a wonderful blend of deckbuilding, push-your-luck, and a good old fashioned game of chicken. How long do you think your opponents are going to stay? Do they look like theyâ€™re making a move toward the surface? Maybe you have enough time to delve just a little bit deeper. That 25-point breastplate is pretty enticing after all. Or maybe youâ€™ve already grabbed the closer, more accessible 7-point chalice and are ready to book it out, hoping the hangry dragon will catch your opponents before they can leave. Allâ€™s fair in looting and larceny. Consequently, youâ€™re very much watching what your opponents are doing and trying to anticipate their moves. And, surprisingly, this tension and head-to-head racing holds true regardless of player count (yes, even with just two, which is impressive). 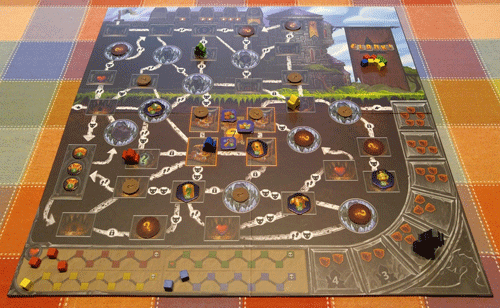 Youâ€™d be angry too if thieves wandered into your home and stole your golden monkeys.

The only flaw that Clank! has is one that any deckbuilder with an ever-changing row has: the randomness of the draw can bite you in the burglarâ€™s behind. Sometimes, youâ€™re just going to have a better (or worse) selection to choose from on your turn. Those â€œ-X clankâ€ cards are precious, as they help to minimize how many of your cubes go into the dragon bag, and they will absolutely get snatched up by anyone who can afford them. Additionally, there arenâ€™t a lot of cards to thin your deck. Maybe itâ€™s the neat-freak in me, but being able to dump all the starting cards and create a svelte, combo-tastic deck is super satisfying to me in deckbuilders. There are only a few cards with a trash ability, so thinning your deck isnâ€™t really a present, or possible, part of Clank!. By the end of the game, youâ€™ve got a fairly big stack of cards with good ones diluted in the mix. Still, this is nothing that ruins the experience and is something that can easily be addressed in future expansions.

I know many people are tired of deckbuilders by this point, however Clank! is an incredibly fresh incarnation that stands entirely on its own. Even if you donâ€™t like deckbuilders, I encourage you to give it a try. Unlike other deckbuilders-with-a-board, Clank! integrates card play and board movement seamlessly, with neither element feeling tacked-on. From the thrill of diving deep into depths to the white-knuckled race to escape with your loot (and life), Clank! does not fail to be an enjoyable experience for any budding burglars-to-be.