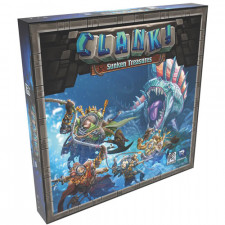 Clank! was somewhat of a sleeper hit last year. I donâ€™t remember much hype leading up to its release, then slowly, it had a kind of grassroots movement as more and more people played and recommended the game. I loved its dungeon-diving, push-your-luck, deckbuilding smorgasbord of mechanisms, so naturally I was excited to hear the game was getting an expansion. My enthusiasm waned a bit when I saw the game was going to include water as flashbacks of drowning in Super Mario Bros. and Sonic the Hedgehog came flooding back (no pun intended). Luckily, Clank! Sunken Treasures is the only water level youâ€™re going to enjoy in a game. 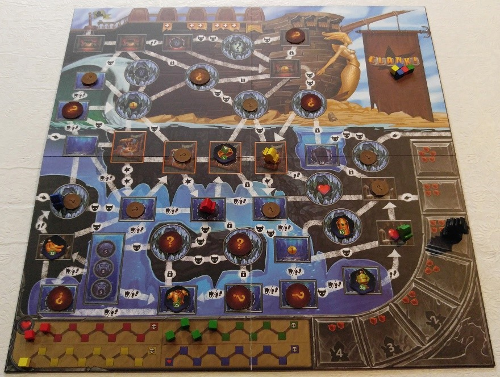 First, Sunken Treasures adds a new double-sided board. You start on top of a ship and dive underwater to do your normal thief thing: fight baddies, get loot, steal more of that apparently amphibious dragonâ€™s artifacts, and get out in a timely manner. Youâ€™re a still a clumsy thief though, so your clank is now the splish-splashing youâ€™re doing in the water like an excited toddler during bath time. This new board also adds rooms that are flooded with water, so you canâ€™t stay in them for too long lest you take damage. Youâ€™re not nearly as waterproof as that dragon, but if you buy the SCUBA mask, you can avoid all that drowning nonsense. There are only two of those tokens though, so you better hurry.

Sunken Treasures also gives you one additional major and two additional minor secrets, a small side board to place all the market items, and more cards that you mix in with the base set. These include new weapons, companions, devices, gems, and monsters (including a ferocious goldfish that you can only defeat in a water spot). I was concerned the increased dungeon deck size â€“ now 135 cards high â€“ would water down (I swear these are puns are not intentional) the expansionâ€™s experience However, it seems that the designer was already well aware of this potential and avoided it much more deftly than my greedy thief going after that 30-point artifact and getting dragon-smacked. Some of the new cards have water-specific abilities, but most are just added variety. For example, there is a new type of card that allows you to discard a card in your hand for an effect, such as drawing more cards or gaining gold. Time it right and you can avoid playing those annoying stumble cards. Overall, the new cards integrate with the previous set much better than I expected them to. I probably wonâ€™t even bother separating out the cards if I never play the base game or teach new players. Just discard the water-specific ones when they come up and youâ€™re good. 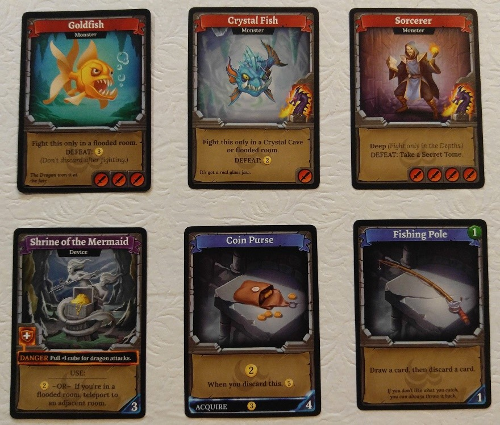 Now arguably, the base game didnâ€™t need an expansion, or at least not yet. With a double-sided board in the base game, the good-sized stack of dungeon cards, and variable token setup, I doubt Clank! has already become too stale for people, if at all. So, for those looking to shake things up a bit, Sunken Treasures isnâ€™t going to do this as itâ€™s a pretty small expansion. I admit that opening the box and seeing a board, a small stack of cards, and some new tokens did not stir the same excitement in me had it been twice as much. After some consideration though, I decided preferred this size expansion as compared to those obnoxious standalone ones that result in you having to store all that unwieldy content.

Ultimately, Sunken Treasures is less about a bunch of crazy new mechanisms and more about demonstrating that Clank! is not just a drop in the ocean (okay, that time, the pun was on purpose). Clank! has already carved its own unique place in the deckbuilding world and what Sunken Treasures does is show its long-term potential. I look forward to seeing the many more places Clank! can go and things it can do. Place your bets now for a desert or jungle theme next.