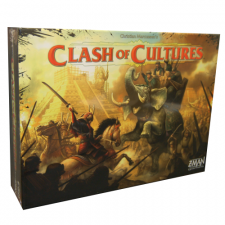 I really like the 4X genre â€“ those open-ended designs that let you explore, expand, exploit and exterminate. From humble beginnings to world dominance, these games craft epic narratives whether set in the past, among the stars or in a fantasy world. They can also be addictive, losing countless hours to the dreaded â€œone more turnâ€ syndrome. Paradoxically, I donâ€™t typically enjoy 4X board games. Theyâ€™re too long. The genre entails myriad minute details to remember, cascading civilization abilities to track and muddled math to calculate. Itâ€™s a form more suited for the computer. At least I thought that way until Clash of Cultures.

Christian Marcussen and Z-Man Games are no strangers to sandbox style games. Critically acclaimed Merchants and Marauders, the teamâ€™s first collaboration, plunged players into the role of a shipâ€™s captain plying the waters of the Caribbean. Beginning with a small vessel and building up, they could trade and raid, while completing missions and searching out rumors to earn gold and glory. Clash of Cultures is a true 4X game that will remind fans of Sid Meierâ€™s award-winning computer simulation Civilization.

Marcussenâ€™s civ-builder is not as chronologically comprehensive. You do begin with what amounts to a hobbit hole scratched into the earth. From that modest genesis, youâ€™ll grope about in the dark, exploring and expanding and discovering. Scientific advances sort of cap out at steel weaponry and metallurgy, so youâ€™ll never get to modern wonders like steam power, television, and mutually assured destruction. Rather than a grand sweep through the ages, events here are a little more compact, representing maybe a handful of human epochs. But theyâ€™re the most interesting ones and the design is better off for it.

Clash of Cultures is all about a compact and streamlined structure which in turn leads to eminent playability. The pace is quick and actions are surprisingly smooth. Relatively speaking, of course. There are still many rules and details. And despite a fixed number of rounds, the game exacts more than the average time commitment of its players. However, the design is so slick youâ€™ll be amazed at the seeming ease with which it immerses you.

Lasting six rounds, players receive three turns per round during which they may undertake three actions each. These might include moving troops to explore and conquer. You can found a new city or activate one to collect resources, build units or increase its size. You can manage a settlementâ€™s people, discover a new advance or attempt to culturally influence a neighboring empire. The whole affair glides along a well-oiled action point allowance mechanic that seamlessly incorporates all of the high points one expects in a civilization 4X game. It also effortlessly integrates other favorite elements such as barbarians, historic events, and wonders of the world.

After the action phase there is a status phase. Here players reveal whether or not theyâ€™ve fulfilled conditions on any objective cards for endgame points. Everyone receives a free scientific advance, plus a new action and objective card â€“ in-game bonuses and unique goals to work towards. You may also raze a size 1 city. And the player with the highest culture and happiness levels determines turn order for the subsequent round.

Everything works so smoothly from action phase to status phase because itâ€™s intuitive and all the pieces are so intricately related. Combat is simple with a low unit count, resolves quickly and rewards numbers while still giving the weak a puncherâ€™s chance. Discovering an advance entails a couple food resources â€“ or idea tokens. Each building costs the same resources. To erect a wonder, you simply meet the scientific and resource requirements to claim one of the communal cards. Itâ€™s all kind of like how organs of the human body function together. Unless thereâ€™s a problem with one, all you ever notice is the body. While playing, youâ€™ll forget that several mechanics and elements are at work beneath the narrativeâ€™s skin. This is how all games hope to operate. Despite that, most are still perceived and/or analyzed according to their disparate parts. Clash of Cultures, to mix my metaphors, is always about the forest over the trees. All of the things you do â€“ the physical components and technical mechanics â€“ are so well integrated and symbiotic that even when youâ€™re performing specific functions, itâ€™s always while seeing the bigger picture.

The designâ€™s visual development, graphic design and intuitive player boards add to that perception. You can actually feel and see your progress, and in a satisfying way. City size is represented by detailed building pieces which are added to the map incrementally. Even world wonders have cardboard standees that are placed in cities when completed. The player aids painlessly track resource collection, happiness, culture and scientific developments. Indeed, the tech tree is pure genius. Besides clearly denoting how the advances branch out, each tech has a square cutout with which to slot cubes in once discovered â€“ therefore you donâ€™t have to worry about an unfortunate bump erasing all your progress!

I guess you could say there are a couple of problems with Clash of Cultures. If you canâ€™t stand moderately lengthy and complex games, youâ€™ll likely find this a chore. And if you like super crazy detail, you might not find it deep enough. Forget those issues. Marcussenâ€™s work is a masterpiece. He superbly captures the sweeping 4X heart and soul in an extremely manageable canvas. Rather than drown you out with a splash of colors for every detail, his well-selected palette fine tunes the core elements that one expects to find in a game of this nature. Sure, this style of game is perhaps imminently better suited on a computer that can handle lots of minutia. But donâ€™t let the apparent complexity scare you off. It does require a time investment to truly appreciate and there is a learning curve. However, Clash of Cultures sifts through all of the ungainly chaff to create a remarkably playable analog version of the genre.