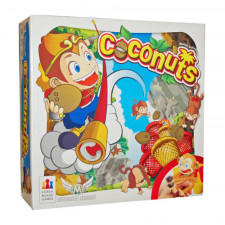 It may come as a shock but plastic monkeys flinging poo shaped rubber coconuts into large cups is so tense, skillful and dramatic that I've begun to petition it for the 2016 Olympics. This game is an extremely odd combination of an Austrian designer getting together with a Korean publisher to produce one of the strongest family games ever released. Coconuts is unrivaled boisterous joy with everyone at the table on the edge of their seat, oohing and aahing as each brown nugget skips off a rim or bounces into its target with a loud clack and stiff rattle.

Board games at their root are enticing due to that magical feeling of youthful nostalgia for play. There is something special about dexterity games as a whole in that they cut out the fat and excess that has become the hobby games industry and hearken back to that goal of retro glory. They ground us and remind us why we started doing this years ago and that gaming isn't ultimately about math and brain contorting decision trees but it's squarely about fun. Fun with a capital F.

There are a number of dexterity mass market games bleeding out into the mainstream over the past few years marketed towards children of all ages yet they all share that quality of being produced at minimal cost. One such equivalent is Jumpin' Monkeys, a somewhat solid kids game where you fling monkeys onto a large plastic tree in the middle of the table. However, the launchers in this game are very poor quality and easily snap, rendering the entire product useless. Coconuts proves the exception in this category as each physical element of the design is top notch. The cups are solid and the monkey catapults are bulky as they can take a huge beating. We've chucked them off the table, pimp slapped them aside and one unlucky primate was even sat on. They're ignorantly smiling and happy as ever, ready to fling fake poo at a momentâ€™s notice.

Don't let the whimsical dancing monkey artwork deceive you - this is a dexterity game that can certainly be enjoyed by initiated gamers just as well as a group of children. A spiritual successor to the immensely popular Loopin' Louie, Coconuts is about constant action and skilled maneuvering. Players take turns catapulting the rubber pellets into a grid of plastic cups in the middle of the table. Victory is achieved by stacking a pyramid of claimed containers on your player mat, or by having the most cups in the unlikely event you run out of ammunition. Lasting as short as ten minutes, the game ramps up quickly and demands you keep pace with the rest of the table.

Surprisingly there is ample room for tactical approach in this game. Turn to turn you have options on where you aim as the cups begin to disappear from the middle of the table and provide for increased difficulty due to emerging gaps. Special red targets that allow an immediate second shot if you claim them also sweeten the objective saturation and always call your name. Finally, the huge wrinkle that you can steal cups from other players affords a level of aggression that's sorely missed from most titles in this genre.

Coconuts also comes with a small deck of special power cards that can be completely ignored when playing with children but may be pulled out for a more wild and hysterics-fueled experience. Each player is dealt two of these cards that they may choose to play before a player takes his turn. Highlights include covering a player's eyes or furiously blowing when they shoot. There's nothing quite like someone randomly walking by as youâ€™re expelling a massive amount of PSI and spittle in the path of a monkey catapult flinging poo towards a plastic basket.

This is a game focused directly on delivering unabashed playschool fun like a group of kids hanging out on the blacktop. Laughter is the key form of communication and the atmosphere bred by this game is infectious. Many fawn over industry greats like Twilight Struggle and Through The Ages, but Coconuts is the game that has people hitting their cell phones afterwards ordering themselves a copy. There certainly isnâ€™t a better Austrian-Korean monkey poo flinging game on the market.