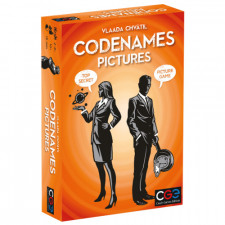 Codenames is still puffing its chest and doing a happy dance after winning the 2016 Spiel Des Jahres award for board game of the year. Coming out of that celebration and attempting to make a name for itself is the new Codenames: Pictures. There's no shocking surprise or curve ball here, it's the same game everyone loves but with black and white images instead of black and white words.

This design succeeds because it hits that magic spot of making you feel clever. Most party games of this type try to do this by having you give clues pointed at guessing a particular celebrity, object, or film. Think Taboo and Catch Phrase, which are fun games in their own right.

Codenames takes the formula a step farther by allowing you to choose from a pool of options that you need to link together with a clever cue. So it's not guess Martha Stewart, but guess Cat, Revolver, and Heart all in one fell swoop.

The paradigm shift here is actually pretty substantial. By making that connection utilizing choice and creativity, you feel extremely empowered when your teammates come through and pull it off. They of course feel amazing as well, and you celebrate with high fives before taunting the other team.

Pictures sticks to this formula but it throws a hefty wrench into the mix. These images are really oddball, twisted little illustrations that feature items like a flying piggy bank or Stegosaurus/Kangaroo hybrid. They'll make you chuckle and they'll weird you out like a clown standing over your bed in the middle of the night. 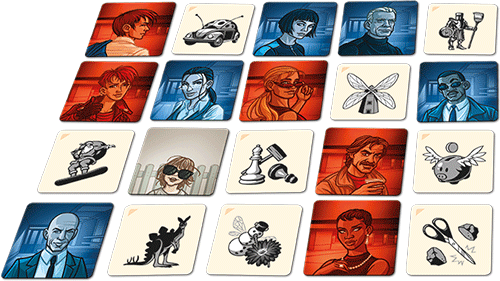 We call this version Codenames: WTF

The feel is surprisingly altered because the game takes on a more sinister approach. Each image can be linked to many different concepts which means it becomes more difficult to eliminate your opponent's cards when giving clues. It's kind of a fascinating journey as it takes a couple of plays to get used to this alteration and adapt. But you will.

I've seen several players turned off their first couple of rounds as they struggled with the transition. They wanted to go back to our old fan favorite but hung in there due to group prodding. After the second game they were sold and now can't decide which version they prefer.

One of the best aspects of this release is the ability to combine Pictures and standard Codenames. Mix in some words and some illustrations and you're off to the races. This provides the best of both worlds and offers an interesting landscape for Spymasters to navigate through.

It's also intriguing how the design has matured. The sand timer has been left out, cards have gotten much bigger to show off those crazy images, and the rulebook offers a suite of variants that are worth trying. Codenames was already fantastic but this level of improvement only increases the value of the product.

If you had to get only one version of Codenames I'd definitely recommend the OG. However, I wouldn't overlook adding Pictures to your collection to expand your variety and offer that excellent option of mixing the two.