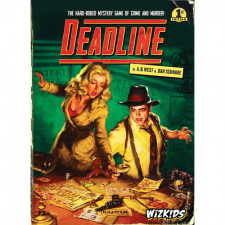 One thing the world needs is more games with a noir setting. 1985â€™s Gumshoe, effectively a deluxe campaign sequel to Sherlock Holmes: Consulting Detective, still rules the roost. Deadline is answering the rotary, arriving at the scene to take a shot of whiskey and slap around a suspect or two.

Designers Dan Schnake and Adam West set out to design a modern take on the contemporary story game. Despite the success of the aforementioned Consulting Detective series, a true successor has not yet arrived on the scene. The fact that people are fawning over reprints of 80â€™s titles says a great deal about the lack of development in this genre. We donâ€™t need a refurbishing of Steven Kingâ€™s IT or the beloved Dirty Dancing. What we need is more Baby Drivers and Dunkirks.

Thatâ€™s not to say Deadline possesses the masterful direction of those latter films. This game sets out to take that Sherlock Holmes inquisitive core and wrap a legit card game of hand management around it. It doesnâ€™t quite connect all of the dots, but it does mostly succeed at what it sets out to do. 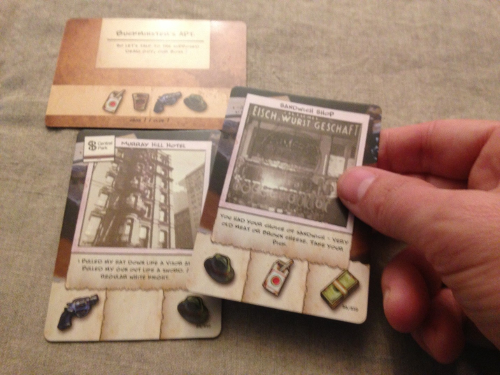 Some hat on hat action.

The game arrives with 12 scenarios. While these stories may only be played a single time, they possess strong variety and you feel as though youâ€™re getting a good number of options in the package. Each presents a mystery of murder or subterfuge that will test participants with a series of questions. The concept here is a design of cooperatively scooping up clues to fill in the blanks, much as weâ€™re familiar with.

The rub is how you earn those scraps of information. Weâ€™re not paging through a story book or reading long passages of text. Instead weâ€™re strategically playing cards from our hand in order to amass symbols and unlock information at the current scene. Weâ€™re digging through leads by solving mechanical puzzles in a joint effort.

Each player possesses a hand of lead cards that contain up to three icons at the bottom. The card will have a location in the middle and some thematic text, but this is very incidental and almost completely fades away shortly into the game. The first player then chooses from a pile of clue cards specifically packaged for the mystery youâ€™re attempting to solve. So we choose to head to the victimâ€™s apartment. Or perhaps we decide to investigate the diner where the bloodletting went down. Maybe we just need a stiff drink and head to the bar.

Each of these clue cards has a required list of icons. Stuff like a pack of smokes, a gun, a wad of cash, and a shot of something vile. The first player places a card down to the table, ideally matching as many of those required icons as possible. The next detective then must lay one down so that the new symbols overlap at least one of the previous entries. Some spaces are blank, meaning they can overlap or be overlapped by whatever you fancy. While this is a simple process, itâ€™s surprisingly thoughtful and tactically challenging. 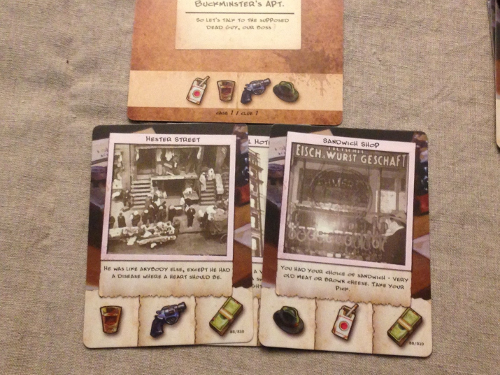 All the symbols are matched, success!

Hand management is important in that you need to maintain flexibility. If you canâ€™t play a card then youâ€™re stuck bowing out of the round. This is a switchblade to the gut because it forces you to play a plot twist if you have one in your fist. These cards gum up the works by requiring additional symbols be played to complete the clue or maybe inflicting a special penalty such as requiring you to drop out if another player does. These stay in front of you and add up, inflicting large amounts of pain.

Thereâ€™s some further nuance in that some lead cards you play let you flip these nifty little matchbooks over. You can spend these on your turn to remove those plot twists or draw a new card. Both of those aspects are important because your hand size is strictly limited and finding playable options can become challenging, particularly if you have a few unplayed plot twists taking up spots.

The final wrinkle is your character special ability. Each player possesses a unique once per game effect thatâ€™s pretty substantial. You can pull off craziness such as removing all of your plot twists or collect all of the played lead cards and add them to your hand. These effects feel substantial and capitalizing on proper timing can lay the brickwork for success. 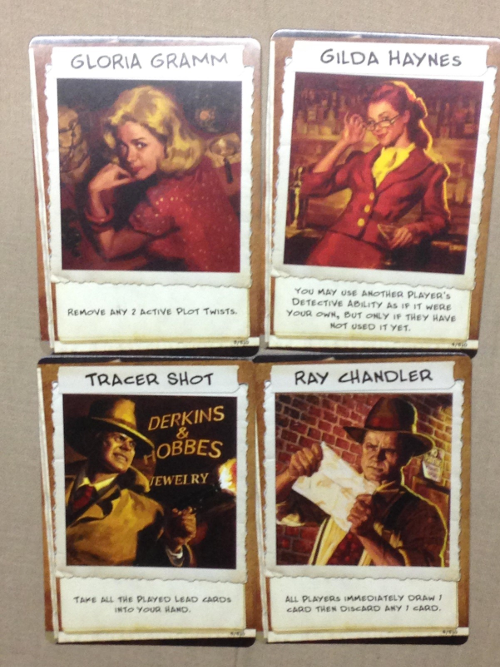 Quite a bit of moxie.

Working through all of these options youâ€™ll eventually possess all of the required symbols in play and unlock the clue card. On the back will be a few slices of writing with narrative information pertaining to the mystery, as well as a couple more clue options which may be unlocked. These new clues are added to your available pool and the next player chooses which one to tackle. This process can get somewhat repetitive as youâ€™re running through a similar set of actions again and again. That narrative aspect is what keeps the juices flowing and keeps you chasing that lure like a pack of salivating greyhounds.

Yet Deadline is an odd duck. It simultaneously struts its stuff while also tripping on its own laces. Its shortcomings lie squarely in the fact that it places a central focus on that overriding mystery, yet it doles out the story slices in bite sized increments over an extended period of time. By breaking up the flow with a card based mini-game you will occasionally struggle to remember the details or recall facts. It can feel detached and removed from the greater context at times.

Regardless, this slick game of hand management does deliver in most regards. It provides an engaging mental puzzle not altogether different from 2015â€™s spectacular release The Grizzled. If you felt that the emotional impact of that latter wasnâ€™t quite there, you may lap up the mechanical focus of Deadline and how it trades that mushy depth for chasing a larger narrative end game.

Deadline is a fine effort that provides a series of well written mysteries bolted onto a pretty neat game of cards. It doesnâ€™t quite reach stellar heights, but it does provide a solid amount of fun while keeping all participants at the table engaged. Now, how â€˜bout that whiskey?