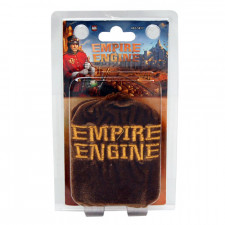 AEG has had remarkable success with Love Letter in its small, drawstring bag. So much so that theyâ€™ve come out with a few other microgames with minimal rules and components including Empire Engine â€“ also in a small, drawstring bag. But here the focus isnâ€™t on bluffing and secrecy, but instead economic power and resource management. The backstory involves a world where the Great Engine which brought a golden age has been destroyed. Now, four kingdoms rise to prominence each believing that they can restore the Engine and obtain ultimate power.

At setup, each player is given one left and one right engine card. Each has one action listed on each edge. The attack action is found on both engines for a total of seven unique actions. At the beginning of every round, players will secretly play gear cards to decide how far to turn each engine. Whatever action ends up on top is the one they will enact for the round.

Did I say secretly choose? Well, sort of secretly. Players also have two gear cards. One says 0,1 and the other 2,3. When it comes time to move their engines, players place each gear card face down above one of their engine cards. If left alone, itâ€™ll move either one or two spots clockwise (depending on which card was played). But a player can also power a gear card with a good meaning it will move the alternate number (either zero or three).

Looking around the table, then, each player can see the possible actions his opponents will take. If a gear card has a good on it, then the engine will either move zero or three. No cube, and itâ€™s one or two. And that can make a huge difference in what you want to play. If it looks like your opponent may attack you, maybe you want to make sure your defense action is taken. Alternatively, if your opponent needs to move their engine two to defend, and they have a good above that gear, then you know they will be defenseless. An opportune moment to strike.

Empire Engine has three different resources that players will accumulate and score. The simplest are the blue cubes â€“ inventions. When a player takes the invent action, they simply take a blue cube and place it in their score area. Next up are the goods â€“ yellow cubes. Goods are gathered two at a time with produce actions. But they donâ€™t go immediately to your score pile. Instead, they stay in a separate ready area. This is important because, if you are attacked, a player can steal a good from your ready area. After attacks are resolved, a player who chose the Export action can move all of his goods to his score pile. Finally, there are the red cubes â€“ armies. Red cubes are placed, two at a time, into your ready area by taking an arm action. To move them to your score pile, you must attack your neighbors. Each engine has one attack on it. The left engine attacks your opponent in that direction and the right engine attacks on its side.. It costs a red cube from your ready area to go to war. Once you do, you automatically win unless your opponent defended. If you win, you get a red cube to your score pile and can steal any cube in their ready area to your score pile. If you lose, the defender gets a red cube from the stockpile into his score pile.

So the whole point of the game is to get as many cubes as possible. Empire Engine lasts eight or nine rounds depending on player count. At the end, each player gets one point per cube in their score pile. Then each player with the most of a color gets three bonus points.

Empire Engine has one asset going for it that few games do â€“ it has both resource management and high interaction. At heart, itâ€™s very much a euro experience. You want to get as many cubes as efficiently as possible. To do that, you want to turn your engines and take the actions that will allow you to gobble up cubes. But layered on top of that premise is a highly interactive system that forces each player to pay attention to their opponents. And merely allowing the option for an attack may change your opponentsâ€™ plans.

Now, no one wants to lose a fight. But the loss of a ready-pile cube isnâ€™t a terrible calamity. What makes the game interactive is trying to divine precisely what actions your opponents are taking or are likely to take. And that works for both attackers and defenders. Only those actions will get red cubes into your score pile. If you defend when no one attacks you, you wasted an action. If you attack someone who defended, you not only lost a red cube, but added one to their score pile.

The game also has four factions that players can optionally use. Each provides a unique player power. Three of them are about on par with one another. The fourth has much more obvious power. Thatâ€™s not to say itâ€™s overpowered or broken. Just that the ability is much easier for a novice to exploit than the others.

And the nice thing about Empire Engine is that it recognizes itâ€™s a small box game. It does not outstay its welcome. It feels almost like a super-filler. A fine little game between meatier fare or while waiting for straggling players to show up to game night.

Of course, thatâ€™s also its downfall. Empire Engine would never be the main course. Itâ€™s light, simple, and enjoyable. But if I want to play something substantial, Iâ€™m never going to grab it. This game is firmly in the category of â€œfun enough.â€ Yeah, I have a good time playing it, but Iâ€™d never specifically seek it out to play again.