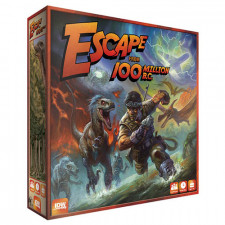 Escape from 100 Million BC Review

Perhaps without expecting to do so, Kevin Wilson and IDW have put out one of 2017's best games to date with Escape from 100 Million BC. Despite great box illustrations, the game looks pretty paltry compared to some of today's better visual presentations and the game was released with very little advance notice or fanfare. There is no massive, million dollar Kickstarter fraught with drama and stretch goals and so far the video review circuit has been all but silent on it. It is not the spearhead of a new product line and it is a relatively low-cost, single purchase adventure game title. It is very much a game out of step with its time, which is apropos given that thematically it is about time travel and correcting things that are, well, also out of step with time.

There is definitely a hint of old fashioned-ness about the game and as a longtime game player that is also somewhat out of step with what I feel are fairly negative current trends in the hobby gaming market, I appreciate that it feels like a game from days gone by. It is also something of an odd bird (or pterodactyl) in that it is sort of positioned between out and out family gaming fare and a more hobby-minded adventure design. It is totally playable and accessible to just about anyone, but it has just enough higher-end grit for the less casual to enjoy.

One to six players take on the role of time explorers, each with differing statistics and abilities, who have become trapped in the titular timeframe thanks to a broken-down time machine that has crashed into a volcano. Setting out from the crash site, the explorers must jaunt across a tile-based landscape to find the scattered parts of their vessel, return them to the ship, and escape before the volcano blows- or the paradoxes and time-rifts created by their presence shatter reality as we know it. Oh, and there's dinosaurs. Also Jeff Bridges and Nietzsche. 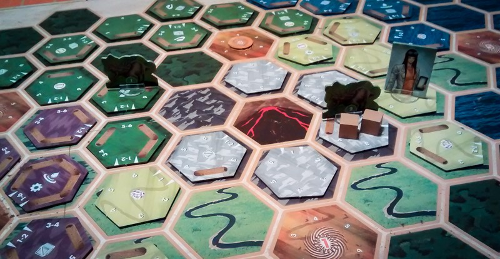 Mechanically, it's very simple despite an unusually long rulebook. All skill checks are opposed, meaning that you are always rolling for successes against another roll's successes- and the sixes explode into additional rerolls, as God intended. Willpower points give you a post-roll chance to roll another D6. Each turn you get movement points equal to that stat and either move across explored tiles or turn up new ones- if you come across adventuring icons, you've got to resolve them. You might find helpful equipment, have to draw an adventure card and pass a skill check, or you might run into a pack of dinosaurs. Dinosaurs are herbivores, carnivores, or aquatic depending on the terrain you have found them in, and they have some neat unique behaviors based on keywords that determine what they do. Some may not be interested in you at all. Others might ambush you. You have the choice to fight and kill them, which will generate paradox points and decrease the stability of the time flow. Or, you can repel them and just drive them away if you have a capable item or weapon. Of course you can also run away in a random direction. Dinos can also remain on the board and move around at random each turn, which can lead to some great drama when a T-Rex decides to come your way.

So there's lots of wandering around, getting into trouble, bailing out other players that have found themselves down at heel, and wondering where the heck those time machine parts are. As if that weren't enough to worry about already, time rifts open up during the game and deposit historical personalities into the Cretaceous chaos. And these are bad, because they also increase the paradox level, which escalates the tension of the entire game. You'll have to round up John F. Kennedy and Socrates and convince them of your good intentions to get them to follow you around and offer their special abilities while you are on route to take them to their assigned time rift.

But that is still not all you've got to do. You and your team mates also have to try to round up as much of the equipment deck as possible. Jet boots and machine guns do not belong in this time period, and at the end of the game these add to that paradox track. Leaving behind snack cake wrappers might mean that the Nazis win World War 2 or the future Earth becomes the Planet of the Cats. I'm not kidding. There is a chart that tells you what your final paradox level has caused. 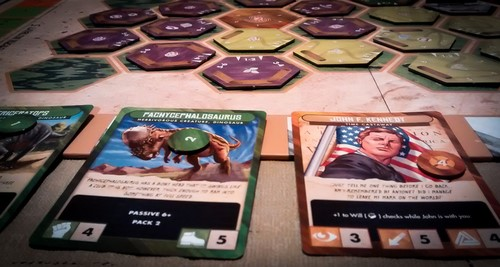 I do not recall this scene from "JFK" at all. (Photo courtesy of Ronny Alexander)

This is a top-notch adventure game design in every respect. It feels classical in the right spots but it also offers a surprising degree of thematic innovation. There are some truly brilliant ideas going on in this game, specifically around how the paradox track operates. This is a highly thematic, highly conceptual mechanic that looks (and is) simple, but it alone makes this the best time travel game I have ever played. It's so thoughtfully implemented- like how killing a dinosaur sure does help, but can you afford the paradox increase? And you simply can't leave the junk of the future in the past, or it screws everything up later. These are very classic science fiction concerns, transplanted to the goals of the board game medium and informing everything the players do during the session. I am also terribly fond of how the paradox track sets the pace of the game- the more you let it increase by exterminating dinosaurs or letting Teddy Roosevelt wander around, the worse the situation gets as time rifts open up and more time castaways show up.

I love this game, and I totally did not expect to. I fully expected to roll it for a couple of review plays and then move on, but it's captured my heart with its fun storyline, cool concepts, and rock-solid mechanics. When all is said and done for 2017, I won't be surprised if I wind up putting Escape from 100 Million BC on my best-of-the-year shortlist.