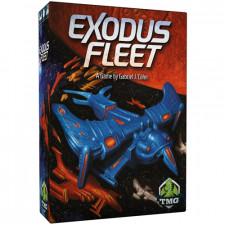 The world is dying and humanity needs to move on. In Exodus Fleet, each player controls a faction attempting to assemble a cadre of space vessels that can take people to a new habitable sector of the galaxy. In so doing, players have to balance resources and factions, while employing numerous special powers to get the advantage over their opponents.

Everyone begins with a faction ship that provides income and storage space. During the game, each player takes a turn being the admiral and deciding the action for the turn. They might call for ship building, mining resources, or transporting people. And whatever they choose, everyone takes part. 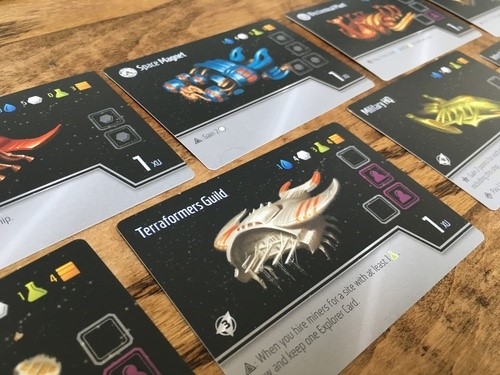 The catch is that not everyone can do the action as effectively. Sure, sometimes you’ll pick an action that won’t benefit your opponents. But more often, you have to rely on the auction. When the admiral calls for mining, for example, each player bids for the best mining spot. Bidding is done one player at a time with the admiral going last. Typically, whoever bids the most gets the best stuff. That might mean more resources or first pick of ships to build. Then lower bidders get worse options. And the lowest bid is usually out of luck entirely. Instead, they get a few dollars as a consolation prize.

This creates a fascinating dynamic. With each action, you’ll constantly be evaluating what your opponents need and what you think they’ll be willing to pay. If you’re the admiral, you get to bid last. But earlier bidders have the toughest decisions to make. If you bid low, other players might get the benefits cheaply. But if you bid too high, you might overpay for even the best results. It’s a phenomenal system that keeps the game tense and interesting.

Meanwhile, players will systematically build up power combos throughout the game. Each time you build a ship, you not only get more storage space, but each one also grants a special ability. Those abilities might require other players to pay you resources or give you discounts on specific actions. As your fleet increases, your powers combine and you can do significantly more each round. You might get an ability that gives you a discount to transporting people. Then another that makes it even cheaper or allows you to transport more people per action. Suddenly, you find yourself looking for ships that accommodate this strategy or further enhance it. 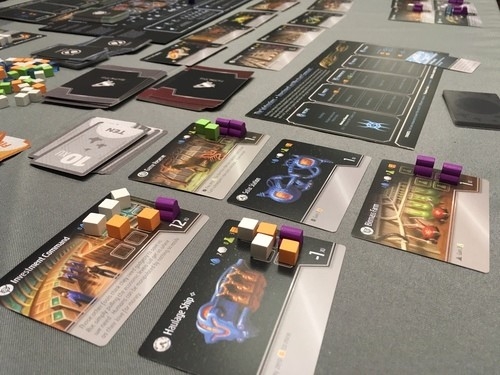 In this way, players’ strategies tend to differentiate organically. Rather than the game dictating to you which actions you’ll need to employ, players are free to select those that are most beneficial to their chosen path.

This also has the effect of creating extremely interesting asymmetric play. At game start, each player has one unique power based on their starting ship. Significant, but generally pretty mild. But as the game goes on, players differentiate more and more and ultimately take completely different paths toward scoring opportunities. For players who like Magic or Netrunner and figuring out fun and interesting combinations, Exodus Fleet will feel familiar and exciting at the same time.

If there is one issue, it’s that Exodus Fleet can run into a “rich get richer” problem. Because ships provide the special powers, the more you get, the easier it becomes to accumulate more ships or take other actions. If one player gets to a substantial ship lead – or more likely one player starts to lag – it can become a problem. Lagging players simply cannot accomplish as much each turn and start to fall even farther behind. 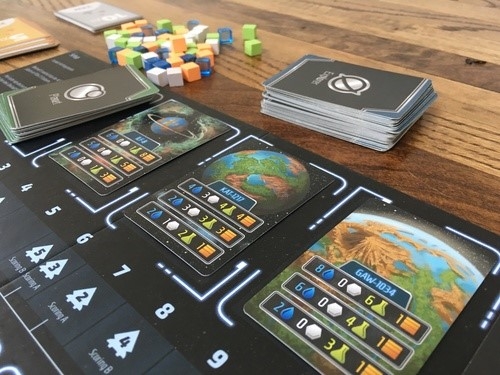 The game addresses this somewhat with exploration cards. These are one time bonuses that can dramatically assist with building new ships or transporting people. The only negative is that you still have to bid on this action (which means players with money have an advantage) and leading players might get cards just as lagging players do. And, explorer cards are generally useful for everyone – even the further ahead players.

Still, this issue tends to disappear after a few games. Once you have a few plays under your belt, you start to see the necessity of building at every opportunity. But more than that, you look for the synergies your opponents are developing and try to snatch those away from them before they have the chance to build them. This leads to a highly interactive experience and one that is sure to satisfy.