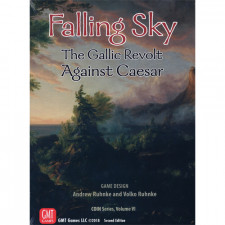 **Please Note: Review is of a previous edition of Falling Sky.**

MB: Well, I have to say that after being floored by the 2nd edition of Cuba Libre, which was my first COIN game, Iâ€™m having a much more muted response to Falling Sky: The Gallic Revolt Against Caesar. Donâ€™t misread me here, I think it is still a completely dynamite game and it skews more towards a wargame-y sensibility than Cuba Libre did so it has a totally distinct feel that goes beyond the subject matter, themes and nomenclature. Itâ€™s a more complex game with a completely different set of factional parameters and objectives, not just another time period with a pallete-swap. I think the system can definitely support a greater deal of complexity and having played Cuba Libre definitely helped me to dig in, but for some reason Iâ€™m finding this COIN title to be more at armsâ€™ length.

DT: You know, I recently read that one of the best things about the COIN series is that itâ€™s such a broad system that itâ€™s easy to find something that will appeal to you. Falling Sky is the one that appeals to me. While Julius Caesarâ€™s conquest of Gaul isnâ€™t my historical specialty â€” Iâ€™m more of a Late Antiquity sort of guy, so I tend to be more interested in the fall of Rome than the switcheroo from Republic to Empire â€” it lands much closer to my heart than most. 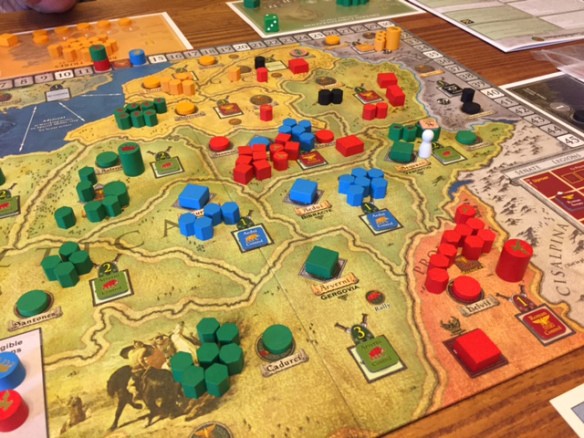 MB: It is a broad system, and itâ€™s easy to see how the core concepts can be applied, theoretically, to any kind of â€œinsurgentâ€ conflict. Which makes it very interesting to see how the folks making these games are taking the core mechanical structure (which is, quite frankly, where the greatness of these games lies more so than in the subject matter) and then applying these layers on top of that to give it specific historicity and to recast the setting. Now, to that end, I think that like Cuba Libre, this game totally succeeds on opening the door on what is for me, at least an area of antiquity that I donâ€™t really know a whole lot about myself.

DT: And what a job it does! Appeasing the Senate back home while you struggle to winter your legions, leading Gallic hordes in flanking maneuvers, leveraging your family ties to the Germanic tribesâ€¦ there are so many things going on here that I never imagined Iâ€™d get to do in a board game. Then again, there are a couple things that prevent this from being as accessible as Cuba Libre.

MB: Right, itâ€™s all just not as direct as Cuba Libre and I almost feel like it requires a little more familiarity to make sense of it all. The games Iâ€™ve played, Iâ€™ve kind of felt lost. In Cuba Libre, I felt the goals were much more concrete and relatable. Part of that is because that is more recent history and Iâ€™m personally more familiar with it, but I think itâ€™s also tough to really make this sort of historical game as detailed as Falling Sky while also keeping it accessible. Granted, I think that the best GMT games are those that make even the most obscure history come alive. Working through the playbook, reading the designerâ€™s notes and everything definitely eased some of the â€œbarriers to entryâ€, but when it comes down to it I think that this is simply a more complicated (if not necessarily more complex) design than Cuba Libre.

DT: The familiarity factor was actually the opposite for me, in that Iâ€™ve learned quite a bit more about Caesar in Gaul than I ever did about the Cuban Revolution. Still, even the way the factions operate is definitely tougher to parse. In Cuba Libre, itâ€™s very easy to see how the Government and Castro clash, then how the Syndicate is out for money while the Directorio is the guy in the middle. Here, Caesar is a straightforward enough fellow â€” he wants to keep everyone subdued and paying tribute to Rome â€” but then the three Gallic tribes feel so darn similar that first game. Thereâ€™s the guy with the big hordes, the faction that controls the heartland and seems sort of wimpy at first, and the dudes up north who feel far removed from the conflict until theyâ€™re suddenly very close to winning. The thing is, theyâ€™re completely distinct. Making alliances as the Belgae to persuade the Germanic tribes into crossing the Rhenus to hassle Caesarâ€™s legions feels nothing like leading Vercingetorixâ€™s swelling army. But it takes a solid while before that distinction becomes clear, and in a series that relies so much on having four asymmetrical factions operate in a particular way, that makes this a slightly trickier point of entry.

MB: There is definitely more subtlety between the tribes and maybe that is one thing that makes it less immediate than Cuba Libre. I mean, when you are playing that game and one of the factions is red and one is green, you get a handle right away on what their goals are (Socialism and money, of course). In Falling Sky those distinctions are much less clear and can, in fact, be kind of confusing.

But you have a great point here about how youâ€™ve learned more playing this game, and I would completely agree with that assertion. And one of the reasons I like this game is that it did prompt me to learn more, and I think that when GMT is at their best their top games will do this to you. Youâ€™ll start by looking through the playbook and the historical notes. Then youâ€™re looking in Wikipedia. And then you might find yourself reading a book about the subject. Thatâ€™s all really great, but it does have a cost - accessibility. Itâ€™s much more grognard-y than populist, which is fine, but I think youâ€™ve got to be aware that this is a more subtle game despite the larger-scale battles.

DT: My other hang-up with Falling Sky is the recent tendency of the COIN Series to simulate these big battles. Itâ€™s a huge departure from the feel of the original titles, where a battle might be as small as a bomb in the road or as big as a strike force sweeping a bunch of insurgents off the map, but where the conflicts always had a certain level of intimacy and quick legibility. Here, battles are these big knock-down drag-out affairs, with the proceedings screeching to a halt for a minute while both sides start tallying up bonuses. Or worse, start tallying up bonuses in all the different places you might feasibly fight a battle over the next couple turns. I will say that this is better than the system they used in Liberty or Death, which was so convoluted that it resembled the second half of that gameâ€™s title more than anything. But as much as you need climactic battles in order to simulate this period, I think they do strain the COIN system ever so slightly by stepping away from its core as an area control game and recasting it as one of gathering big stacks of soldiery. 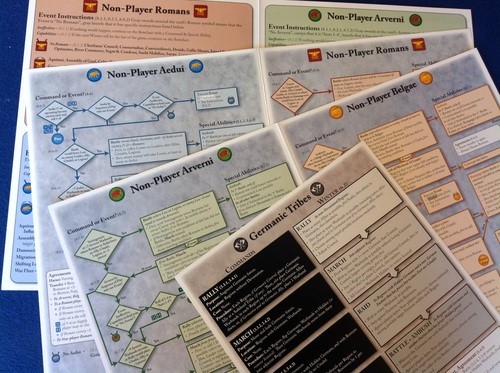 MB: Even though Iâ€™m new to this series, only two games in, I can definitely see what you are saying here. I can definitely feel something of a strain in this systemâ€™s depiction of the more open, martial warfare. Thereâ€™s less of an â€œinsurgencyâ€ feeling, which isnâ€™t surprising that this is an era that was more about set piece battles than guerilla fighting and socio-economic shifts that were almost as impactful as military affairs. To that end, I prefer what I saw in Cuba Libre where you had the more martial aspects going on, but also a much more â€œbig pictureâ€ take on the overall situation. What Iâ€™ve always liked about card driven games- going back to We the People, Hannibal, Paths of Glory and so on- is how the games capture a real sense of historical sweep. Thatâ€™s here, sure, but it feels like it skews too much toward a military game- not so much a more dynamic area control affair like youâ€™ve suggested.

DT: I know I sound like Iâ€™m nitpicking this thing into oblivion, but thatâ€™s really only because this is my favorite COIN game thus far, so the little things are like the pebble in my most comfortable sandal that gradually works up a blister. The things I love are far more significant. For one thing, I adore how the goals of each tribe feel more connected than ever. Everyone wants something to do with those local tribes, and itâ€™s all very hands-on. Thereâ€™s no abstracted support or opposition, just those with you and those against you. This has the dual benefit of drawing the action both inward and outward. Inward because there are a few central regions that are so tempting to control, and outward because itâ€™s often worthwhile mounting an expedition to far-off Britannia or Germania once the central territories are locked down with citadels or forts, especially when your opponents might not have the time or resources to make the journey to those frontiers. Itâ€™s exceptionally clever design at even a map layout level, letting the action take place in any number of places at once and forcing people to make opportunistic alliances and careful sacrifices to prevent any one faction from running away with the game.

MB: Well, out of the two Iâ€™ve played, I guess I can say that this one is my least favorite. But I can appreciate what you are observing here. Thereâ€™s no doubt that this game is pushing the series forward in terms of describing and exploiting that interconnectivity. I do like the game a lot, I think itâ€™s completely fascinating in terms of exploring its subject matter and the COIN system remains brilliant throughout. I did find that the solitaire game, unlike Cuba Libre, was quite a bit more difficult to manage but there again I think some of that has to do with the subtlety and lack of familiarity Iâ€™ve already mentioned. But I think as far as rich, deep and thematically compelling games on the market today go, these COIN games might be among the very best on offer for those willing to put in a little time and effort to dig into what they have to offer.