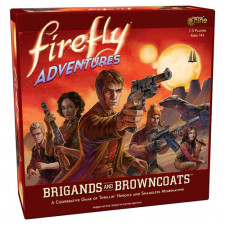 Critical Hits: Nails that Firefly feel, looks great.
Critical Misses: Difficulty is wobbly, buildings can get in the way.

When Gale Force Nine releases a new title, I take notice. Over the years they've been one of the most consistent shops in producing imaginative and narratively compelling designs. Surprisingly enough, the original Firefly board game was a rare miss for my tastes due to its shortcomings in capturing what I found to be special about the intellectual property. Despite this, I am definitely a Browncoat and thus elated with the prospects of a new release in this verse.

The first significant difference you'll notice here is scope. This is Firefly as it's meant to be, dirty and planet-side with messy interactions giving way to messy gunfights. The characters and their personalities are front and center as you take on the role of Mal, Zoe, Jayne, or Kaylee - don't fret, other familiar faces are arriving later via expansion.

In an interesting twist, no one is running the goons on the other side. Instead, they typically sit in defensive positions guarding doorways or rooms with pricey goods. Occasionally they'll be under a patrol directive where they scoot about the map in a pre-programmed path.

While this may appear soulless, it actually serves the game rather well. The cleverness of the design hinges on a two state system for player characters where you can be in casual or heroic stance. Each offers a different set of actions found on one side of your asymmetrical player board. If you want to let loose with your frontier pistol or crack a thug in the face with a wrench, you need to pick up your mini and swap it out with the heroic version to show that you're acting reckless. In this mode, thugs in sight will become alerted and start to move towards you aggressively to let 'er rip.

This style of play is enthralling because it perfectly captures that Firefly arc of smoothly setting up a job only to find caca hitting the fan a short time in. Things go south as you break from your nonchalant cover and kick over the bucket. That delightful tension of maintaining your cover and picking the absolute right time to open fire is tantalizing and unpredictable due to random events and unexpected occurrences. It's delicious in a way Firefly aughtta be.

The cost of this unpredictable drama is an equally unpredictable difficulty level. Your effectiveness can heavily depend on randomly drawn equipment and those scenario specific events. Sometimes a job will just go too smooth and feel somewhat unsatisfying. Other times it will be fantastic as hard-nosed cowboys swarm out of buildings and put you up against the wall. This is perhaps the designâ€™s greatest achievement as well as greatest flaw.

Intersecting with that wonderful stance system is the time track. Reminiscent of Red November or The Dragon & Flagon, characters spend time as a resource to perform actions. Everything from picking a lock to talking it out with a sentry will require expenditure. This supports the tension expertly as you inch closer to scenario end and the primary condition of loss.

It's also smooth how the two stances dovetail with this mechanism. Typically actions will cost less time in heroic stance, further incentivizing you to get things moving and get the fireworks started. That give and take of more time but less space - due to guards getting all up in your grill - is a fantastic push and pull with a constant stream of interesting decisions.

The time track does come at a cost. Working with a large number of active enemies can be fiddly and burdensome. It leads to a lot of procedural activity and can slow down the action. This doesn't sap enough energy from the experience to derail it, but it is a small price we must pay.

I've spent a great deal of time yapping about the overall effectiveness of the mechanisms and how this game nails that Firefly atmosphere, but I haven't even touched on the primary focus that will draw most observers to the shindig - those sexy 3D buildings.

The one gimmick found in this box, and it's a beautiful one at that, is a collection of three-dimensional shanties you use during play to add oomph and excitement to the proceedings. This works pretty well to elicit a soothing pop, but it can also get in the way of things slightly. Occasionally you'll bump a structure and have it spin on its axis, or maybe you'll have a bit of a tough time seeing what tokens or miniatures are inside the shed. Still, I love a game that utilizes its box in play and this trick works far more than it doesn't.

Take all of this we've talked about and wrap it up in a clever job system with scenarios that are extremely unique and you have a winner. They each play out quite differently and will even shock you upon repeated plays - which is frankly a necessity given the inclusion of only four options in the base game. A loose campaign structure is also presented that works very well and will have you chasing money with a familiar cast long into the wee hours of the night.

Firefly Adventures is certainly not perfect, but like the greasy flawed crew of the Serenity, it provides ample charm and will keep a smile plastered to your disheveled mug.