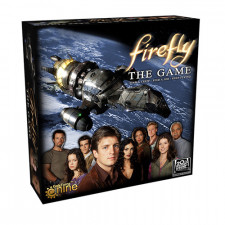 If youâ€™re looking at licensing a cult TV show to a board games manufacturer, Iâ€™ve got a hot tip for you. Gale Force Nine and the crack team of Aaron Dill, John Kovaleski, and Sean Sweigart should be at the top of your meeting schedule. Iâ€™m convinced that when these guys sit down to design a licensed game, they write down â€œwhat do fans of this property want to do in a board gameâ€ on the top of a sheet of paper and then make a list. Then they apply the structure, mechanics, and process in such a way that lets the players do exactly those things. This design sense is what makes games like Dune and Battlestar Galactica so rich in setting and conceptual theme, and the new Firefly game slides right into the roster of really great licensed titles that totally hit the mark.

But hereâ€™s the funny thing. Iâ€™m actually not much of a Firefly fan. I actively hated the show for years, despising the too-cute, too-clever dialogue and a little too much of Joss Whedonâ€™s almost clinical nerd demographic pandering. So when this game was announced, I kind of shrugged at it. But then I saw that the Spartacus team was on it, and was interested at least at that level regardless of my relative disinterest in the show.

So hereâ€™s the scoop on the subject matter up front. If youâ€™re a toboggan-wearing, Jayne Cobb quoting Browncoat, youâ€™re going to be happily inundated with fan service, stills, quotes and most importantly gameplay that totally represents the capricious space pirate/western theme of the show. The emphasis is on the crew and situations of varying moral character more than on hardware and space opera. If youâ€™re not a big damn hero and donâ€™t know a gorram thing about why they wonâ€™t take the sky from Washâ€™s lucky dinosaurs, what youâ€™re putting on the table remains a damn good space adventure full of cowboys, crooks and commerce.

The framework- start out with a ship and some seed money and set out to complete deliveries or other tasks, improving your ability to do so over the course of the game- isnâ€™t terribly different than Merchant of Venus or Merchants and Marauders. It says right on the box what you do in the game (in the words of captain Malcolm Reynolds)- â€œFind a crew, get a job, keep flyingâ€. There are a couple of scenario cards that provide you with the overall agenda for each game- making money, making contacts, or completing certain tasks. Thereâ€™s a great solo option available as well.

Starting off with a Firefly-class transport ship and some seed credits clenched in the fist of Malcolm or another captain, youâ€™ll pilot your ship around the â€˜Verse taking jobs for criminal, government, or capitalist contacts. These are generally either pick-up-and-deliver missions or (mis)adventures that may require you to complete skill checks depicted as part of events drawn from the â€œAim to Misbehaveâ€ deck. Most jobs require you to have certain skills or traits among the crew youâ€™ve hopefully hired along the way, and upon completion youâ€™ll have to divide the spoils up with your people or theyâ€™ll get demoralized and can be hired away by another player. Theyâ€™ll also take a demoralized token if theyâ€™re moral and you take on an immoral job.

I love that many of the Aim to Misbehave cards and other adventure elements throughout the game offer either one or two alternatives to pass them- you might get a choice to shoot your way out of a situation at the risk of losing crew or taking on an arrest warrant or you may be able to risk a harder diplomacy check with only the risk of failure. Like Merchants and Marauders, thereâ€™s a sense that the game is occurring in a moral gray area and players are free to vacillate between legal and illegal choices with certain consequences. I also love that the game uses one of the greatest mechanics of all time- the exploding six, whereby you reroll any sixes ad infinitum- so that no test is actually impossible and your narrative might include some incredible instance where you really were a Big Damn Hero.

Thereâ€™s just enough detail to bring out some of the showâ€™s key concepts. Do illegal things like harbor crew members with warrants or transport contraband and the mutually-controlled Alliance Cruiser might flash the blue lights and pull you over for an inspection. Travel through the less-civilized border zones and you might find your ship overtaken by the dreaded Reavers. You can buy everything from ship components to knives at the various planetary markets. Hire on the volatile and unpredictable guinea pig River Tam, who may or may not help you to ace every skill check in the game and then do what youâ€™ve got to do to get her brother Simon on board to make the most of her potential.

Youâ€™ve also got to be concerned about fuel usage throughout the game. Every time you â€œburnâ€, you spend a fuel token which also takes up half of one of your shipâ€™s cargo slots. During flight, youâ€™ll flip over cards from a travel deck that usually say â€œKeep flyingâ€ but some have some random encounters on them- salvage ops, Alliance Cruiser movement, Reaver movement, or other events including some that might require you to spend spare parts tokens to keep flying. Here again, you might find yourself making a decision to stop and help someone, thus slowing down your trip, or flying on while pissing off your moral crew members. I really like that at its heart, Firefly is as much an adventure game about people and leadership as it is a mercantile one about work and profit.

But it is most definitely not a combat game, and anyone expecting space battles or direct conflict between players is going to be disappointed. The multiplayer game has some friction especially with that fun crew-stealing rule, all players moving the Alliance and Reaver ships to harass others, and possible trading. But like Merchant of Venus, Firefly is usually a race to see who can make the most money or meet whatever goals there are the quickest. The paper money looks like a million bucks because thatâ€™s what youâ€™re going to be after for most of the game. Victory points just wouldnâ€™t seem right in this design.

Everybody understands making money, and I think everybody that likes both money-making and science fiction games will find a lot to enjoy regardless of the degree of attachment with the show. Itâ€™s a very accessible title despite a rulebook that could use a good revision to clarify some things. A two hour playtime keeps things crisp and rarely boring. I didnâ€™t really notice it until my third or fourth game, but I like that there are never more than six pieces on the map at any time- no counters, markers, tracking chits, flags, neutral units, or anything like that. Just your ships and space. Granted, offboard each player has to manage their ship boardâ€™s cargo holds and any crew or equipment cards on hand as well as the job cards theyâ€™ve taken, but thereâ€™s really not a whole lot to keep track of or monitor while youâ€™re playing.

I think itâ€™s a testament to the strength of the Firefly board game that playing it prompted me to go back and give the show another chance. I spent more than a couple of happy evenings watching the show and playing the solo game. I actually enjoyed the show more this time around because I watched it on its own merits and far removed from any of the bizarre cultist hype, and I found that my enjoyment of the game was enhanced by having a greater sense of the setting and characters. Whatâ€™s more, it made me appreciate even more how comprehensively Gale Force Nine has delivered the definitive Firefly gaming experience.