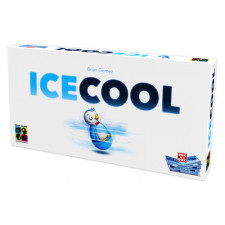 Ice Cool is all about that profile pic. When you take a gander at all those splayed three-dimensional rooms and the pretty coat of polish, your eyes begin to gleam. It pulls you in like a kid in a candy store and you have to try it. Luckily, this is the one time where you swiped right and the person who showed up actually resembled the image that drew you in.

This is a flicking game that utilizes weeble-wobble penguin pieces that are weighted with a round base. You can perform nice trick shots and put a great deal of â€œpenglishâ€ into your flicking action to put side spin on the little suckers. They react nicely and allow for some solid skill to enter the mix.

The surface youâ€™re scooting across is a collection of rooms with raised walls. The box does this crazy Russian doll trick where you have boxes within boxes that pull out to form the penguin school where the mayhem will ensue. These different sized rooms connect at doorways and provide for a really interesting layout that is both eye-catching and highly playable.

Ice Coolâ€™s premise is that players are penguins who are trying to evade a hall-monitor and run amok through the campus to collect fish. Really it doesnâ€™t matter because youâ€™re flicking wobbly penguins with trick shots. You canâ€™t help but smile at the absurdity of it all and how it just works.

One player is designed the Catcher and is trying to track down the other players. If they can collide with a player they take their ID card which affords scoring at the end of the round.

Meanwhile the players are racing about with these little intoxicated penguins trying to fly through specific doorways to collect their fish. You have to cross the threshold cleanly in order to legally score which presents some obvious moments of hilarity as the little tuxedo-dudes get their noggins lodged in an archway. 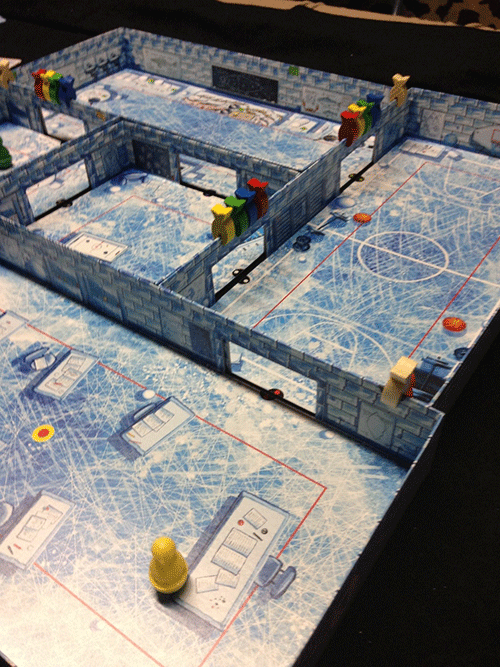 tâ€™s all about them fish.

The scoring system is simple but clever. Cards list point values of 1-3 and the numbers are equally distributed throughout the deck. If you have two 1 point cards you can reveal them after taking a turn to go again. Thatâ€™s a nice little bone the game throws you if you get unlucky and draw the short straw repeatedly.

Itâ€™s easy to dig the hidden aspect of scoring because it injects a subtle layer of drama in assessing who to target and how to play your turn. The game will last a number of rounds equal to the number of players-each participant gets to be Catcher once-so you will have a rough idea of who is doing well but it will be imprecise.

When taken seriously competition can get fierce. Youâ€™ll see players purposely bumping others to push them into the open and create vulnerability to the Catcher. Sometimes a risk will be taken with an attempted jump shot (totally legal) to sail across the board and clear distance. The timing of triggering those bonus actions by revealing those single point cards is also important to seizing victory.

Fortunately the game can also be completely laid back. Itâ€™s mechanically light and not terribly mean, so this can totally be enjoyed in a light family setting. The Catcher is incentivized to collide with each player only one time so thereâ€™s never a sense of being picked on.

Itâ€™s also very interesting to see how quickly children develop their technique in this game. Your first few flicks will be uneven and jilted, like a fuzzy-eyed bar patron stumbling out after last call. A couple turns later and it all comes together with incredible shots that sail through multiple doors.

This reliance on a degree of skill mixed with a bit of chaos and a very unique board form Ice Coolâ€™s identity. Itâ€™s a game that draws onlookers and is simply fun to pull out and rattle off a quick 15 minute game. The bottom line is that Ice Cool is pretty damn cool. Hey, donâ€™t look at like me like that, you knew it was coming.