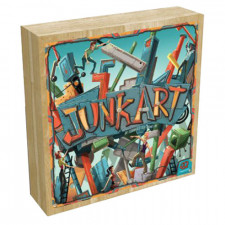 Dexterity games are nothing new. You can go to any Target or specialty toy store and find a game that will allow you to build, topple, flick, push, or do any other test of your fine motor skills. Often, these games are simply a silly pastime rather than something youâ€™re willing to break out at game night. After all, how much more can be done with yet another stacking game? As it turns out, the designers Jay Cormier and Sen-Foong Lim prove that thereâ€™s a lot more and it involves letting your inner artist come out. 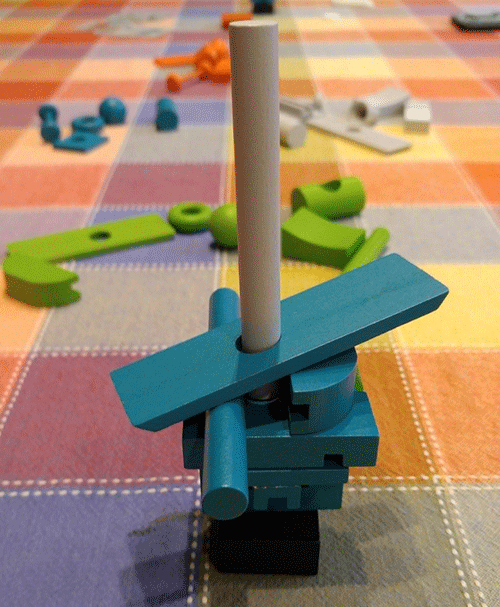 Pieces are an important part of any dexterity game and, as can be expected from Pretzel games, the components in Junk Art are outstanding. The wooden box is eye-catching, and seems to tell you that thereâ€™s something different and special inside. Once you open the box, you see 60 colorful and good-sized pieces that instantly draw you in. These arenâ€™t your standard cubes, spheres, cylinders, and pyramids. Iâ€™ve yet to pull the game out and begin explaining before others are already grabbing at the pieces and idly building with them. There is something irresistible about the bright, funky-shaped orange, blue, green, and gray pieces. This is a visual and tactile experience that few games provide you with.

A game of Junk Art consists of a World Tour: three cities (i.e., gameplay modes) in which you play according to different rules. There are 12 cities to choose from and one of them, Nashville, even allows you to use pieces from Flick â€˜Em Up to play a combination flicking and stacking game. (Although this isnâ€™t a must-try scenario, it is a clever and appreciated bonus for owners of both games.) And if you are feeling creative, you can even design your own awesome drafting / secret traitor / bluffing variant on one of the three blank city cards included. 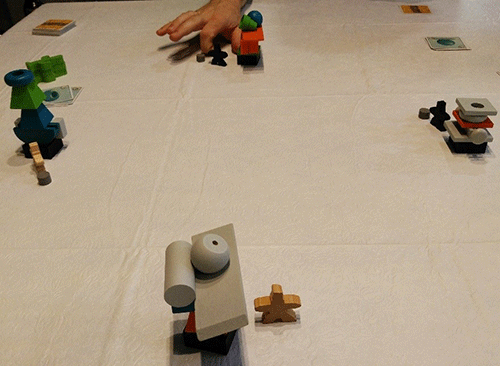 Itâ€™s High Noon in the Flick â€˜Em Up mashup.

The amount of variety is spectacular as youâ€™ll never get tired of doing the same stack, stack, tumble, and start again routine that other games of its ilk do. I wonâ€™t go into all 12 cities, but here are some of my favorites. In Home Town, you try to build the tallest structure, but you do so via a â€œI pick, you chooseâ€ piece selection process. So, you donâ€™t want to provide your opponent with one good and one bad choice, because youâ€™re going to get stuck with that horrible long cylinder that you canâ€™t do anything with! In Monaco, you deal out 10 cards, then frantically race to build a structure as fast as you can. The more pieces you use, the better! Lastly, in Paris, the city of love, you are all collectively building a structure in the center of the table. But instead of showing your love with kisses and bonbons, youâ€™re choosing one of three cards in your hand for the next player to add that piece (typically the one you think is most awful/difficult) to the structure. Itâ€™s almost like playing a reverse version of Jenga. Then, you laugh maniacally at giving your opponent such a terrible card until you must sheepishly accept yours, which happens to be even worse than the one you just inflicted. You know what they say about karma.

And it all came tumbling down.

Whether you prefer speed, skill, or just general silliness, there is something for everyone in Junk Art. This variety keeps the game fresh and exciting, despite the scenarios ultimately just being variants on the same stacking concept. Moreover, the game isnâ€™t a thoughtless dexterity activity. There are plenty of opportunities to play strategically, either by choosing the order you play cards, how you set up your opponents, or even choosing to knock off a particularly annoying piece just to stop it ruining your future placements.

One of the best parts of Junk Art is how quickly each mini-game plays. Even the cities with player elimination arenâ€™t an issue because they donâ€™t last long enough for anyone to feel left out. Plus, the real joy of the game comes from watching others build their structures, using the pieces in a way you never would try. The game is inherently engaging as you anxiously wait to see if someoneâ€™s building will stand or topple, secretly wishing for both. It is incredibly fun to see the amazing constructions that seem to defy physics. You watch in wonder as someone stacks a long cylinder atop a precariously placed dumbbell and are so proud of yourself when you can pull off an equally impossible construction. When you initially see the pieces, you canâ€™t fathom how youâ€™re ever going to be able to build anything with the bizarre shapes and cutouts. Yet, somehow, you pull it off, placing pieces sideways, around, or inside others in crazy positions.

Each building and piece placement is a work of art. You look around the table, commenting on what othersâ€™ buildings look like, exclaiming how unstable the structure appears, praising how deftly someone placed their piece, or simply marveling at how ridiculous something looks. You canâ€™t help but defend your work of art when others insult its structural integrity or aesthetics. And no one seems to be immune from taking pictures of their beautiful art, even several times in a game as it builds and changes. Iâ€™ve played several games of Junk Art, one right after the other, and time flies. I was shocked when my friend said he played for five hours straight; then, we did the same the following night.

Although some players may be moderately more adept at balancing their pieces, Junk Art never feels unfair or imbalanced. Somehow, everyone manages to place the piece they have in ways that you think youâ€™d never have been able to do. The game brings everyone back to a childish sense of excitement, building with blocks and eagerly anticipating placing your next piece. Instead of just building aimlessly though, Junk Art provides enough structure and purpose that there is a real game amidst all this building. So, whether youâ€™re a dexterity game lover or hater, casual or hardcore gamer, or young or old, Junk Art is guaranteed to bring out the artist in you.