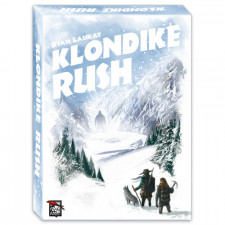 Klondike Rush, designed and illustrated by Ryan Lakaut, is an auction stock market game where 2-5 players look to strike it rich. Players make their fortune investing in four mining companies prospecting for gold on Mount Titan. Over the course of a game, players will acquire stocks, build a sprawling network of mines, collect resources scattered across the mountain, and hunt the mysterious snow beast.

The beating heart of Klondike Rush, however, is the auction itself. Because doing any other action in the game â€“ building mines, acquiring stocks, collecting resources, etc. â€“ is contingent upon winning a bid for a mining company card. In a very real sense, the auction is the game. 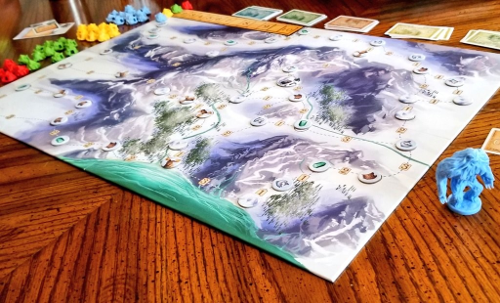 Bidding is simple. The active player, indicated by a chunky snow beast miniature, reveals the top card from the mining company deck and makes the first bid. Once every player has a single chance to raise or pass, the company card is awarded to the winning bid, which keeps play moving at a pretty decent clip. When the last mining card is auctioned off, the game ends and whoever has accrued the most wealth is declared the winner.

When Iâ€™m bidding in Klondike Rush, I feel like Iâ€™m playing poker. Every player begins on even footing, so even the smallest edge on competition is huge. Maximizing positional advantages and keeping track of how much money the rest of the players are holding (perfect but hidden information) are two ways to earn the best values in the auction. Itâ€™s tense, highly tactical, and completely unforgiving. A player who bids too high a couple times too early in the game will consistently get outbid in the middle and late game. It isnâ€™t player elimination, but it might as well be. Despite my pre-game warnings, at least one player has iced themselves out early on in each of my plays thus far. To my chagrin as a naturally conservative player, the inverse experience isnâ€™t necessarily more engaging. If you realize people are spending too much, then you become the player passing and watching the rest of the table play, at least until the spenders run out of money.

Itâ€™s an extreme example, but itâ€™s quite possible for a player to not win a bid in the first half of the gameâ€™s hour plus run time and handily win the game. Iâ€™ve seen it happen. This scenario is a testament to the viability of different strategies and balance of Klondike Rush, but also points to a personal concern with the gameplay â€“ like in poker, for rounds at a time the optimal play in Klondike Rush will simply be to pass. Now this may just be a personal bias, but I like participating in games and ideally every turn.

Of course, there is more to Klondike Rush than auction, but the very nature of the game relegates these other elements of setting and concept to little more than icing on the cake - or should I say, snow on the mountain. 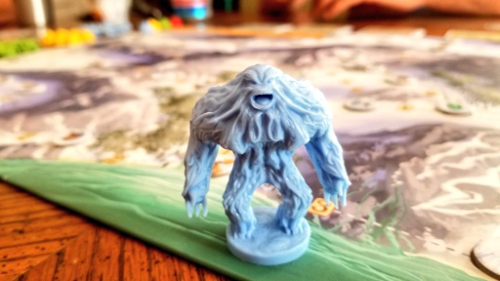 Take the very promise of hunting the snow beast as an example. In game play, it functions as a longest road type mechanic; whereby, whoever collects the most snow beast hunt tokens gets an often negligible end of game bonus. Even this sounds better in concept than practice, as the snow beast reward is almost always won by a player collecting three or four tokens on a final turn of the game.

Another mechanism that left me scratching my head was how the stock value track goes up to a maximum of 10, yet there are only enough mine minis and company cards to reach the 9 value. This is certainly nothing game breaking, but along with the included and appreciated rules errata sheet, it does make me wonder if a few more weeks in development couldnâ€™t have smoothed out a few rough edges.

As it stands, Klondike Rush is a fine game. Itâ€™s balanced, playable, and at times a lot of fun. As a straight forward auction game with no training wheels or safety net, this game will appeal to the more cutthroat auctionistas and those who favor more high stakes bidding - maybe try it out at your next poker night? Just remember, you got to know when to hold â€˜em and know when to fold â€˜emâ€¦ and fold â€˜emâ€¦ and fold â€˜em.