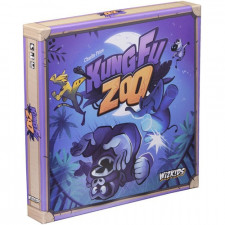 I love dice, and I love dexterity games. It should be no surprise then that I also love Kung-Fu Zoo. I didnâ€™t know much about it when I received it, but I knew Iâ€™d love it as soon as I opened the box and saw the arena and colorful dice. This game is simple, clean, and everything youâ€™d want out of a game that involves flicking dice at one another in simulated martial arts combat. Above all, itâ€™s fun. Iâ€™m a reviewer, so here are 600 words elucidating why itâ€™s fun, but if you skip them and just order the game right now I wonâ€™t have my feelings hurt.

The premise of Kung-Fu Zoo is light, but does provide a fun context for some of the player abilities. Unlike the (excellent) Strike!, thereâ€™s no debating what your dice represent. Late at night, once the people are gone, the local zoo comes to life as the various animals engage in Kung-Fu cage matches. These last-man-standing fights are as quick as they are kinetic, with a new champion being crowned every night. 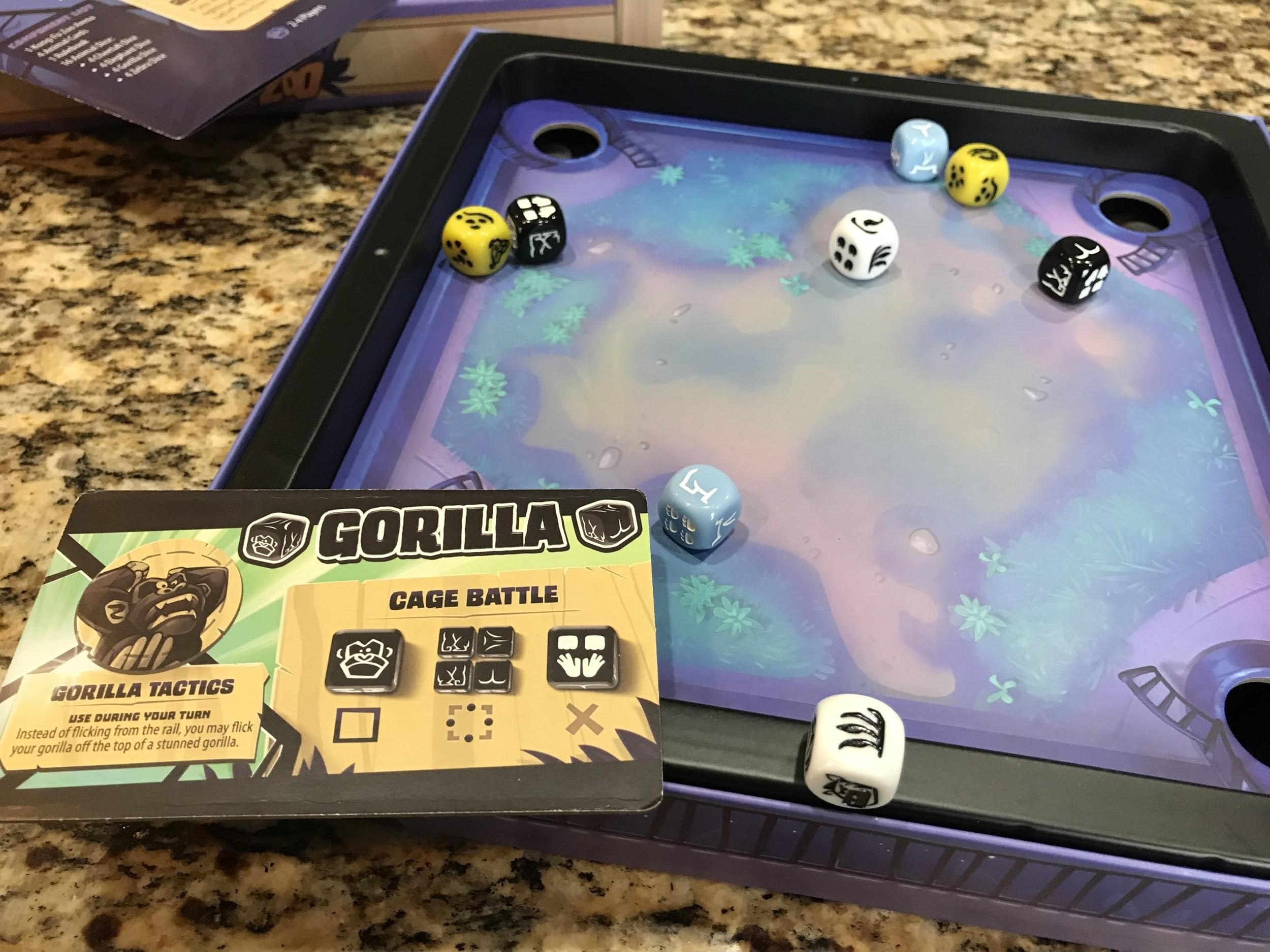 To play, each player will flick their dice into the arena - which doubles as an insert - and attempt to knock opponents into one of the corner holes. Dice that disappear into these â€˜cagesâ€™ are gone for the round and you play until only one creature is left standing. Complicating the matter just enough to make it interesting are the various restrictions the dice will put on you. All dice must be flicked from the edge of the board, but where on that edge you place them is determined by which face of the die is showing. Most of the time youâ€™ll be flicking from the center of one of the board edges, but pick up one of your dice with an animal face and you can place it anywhere on any edge giving you the perfect trajectory to slam an opponent into the cage.

Or, as often happens, to miss them wildly despite the perfect angle and laugh as your die spins and twirls for what seems like 5 minutes before dancing its way right into the hole you were hoping to knock your opponent into. Those are some of my favorite moments. I love dexterity games because of the raw kinetic joy that comes from sending board game pieces - often so dour, so functional - careening across the table. These dice are heavily rounded, meaning that youâ€™ll see your elephant pirouette between 3 enemies before clunking into the space below the arena as often as youâ€™ll effectively ricochet your cheetah off two dice, eliminating your opponent for the win. And honestly, theyâ€™re both equally satisfying.

Like the (also excellent) Tumblinâ€™ Dice, itâ€™s a game that can be played with skill. The landing of your die face is up to chance of course, but the board is tight enough that a mastery of angles and flick control can pay off. Iâ€™ll never reach that level, nor do I think Iâ€™d want to, as Iâ€™m happy celebrating the impossible shots as often as I laugh at the impossibly unfortunate ones. 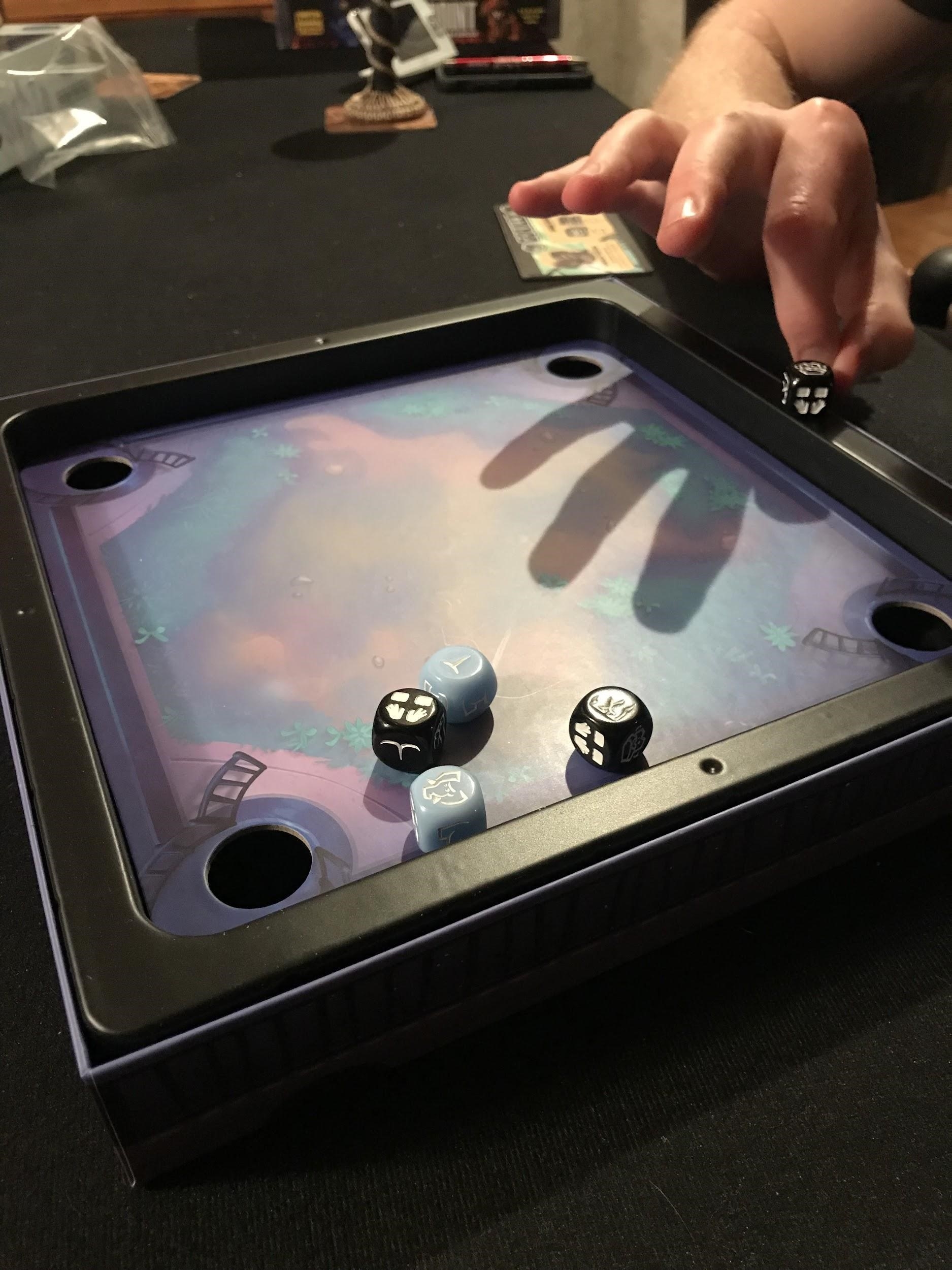 This, perhaps, is part of why the points mode fell flat for me. Where the cage match is full of dice combat, the points mode involves simply flicking your 4 dice into the arena in turn and hoping to score well based on which side lands facing up. You can aim at your opponents to disrupt points and still try to shoot them into the corner holes, but as there are no opportunities to repeat flicks the game often ends anemically rather than with the joy and trash talking that comes with a last-man-standing victory. This mode would be great for players who donâ€™t want direct conflict, but at the same time my group doesnâ€™t reach for this kind of game when we donâ€™t want to mess with each other.

Kung-Fu Zoo is a simple game with a simple premise. Itâ€™s unburdened by fiddly rules; the player abilities and die facing systems provide just enough strategy to balance the chaos. And as I said before itâ€™s 15 minutes of chaotic, kinetic, fun.