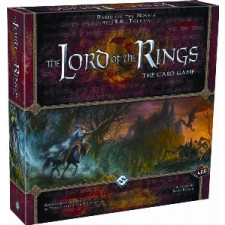 Lord of the Rings LCG Review

At last, the hill troll lies dead at your feet. The allies who remainâ€”half were slain by the giant bruteâ€”pile onto a rickety raft, and you push off down the river Anduin. Landscapes whiz by as the currents pick up, and you've soon lost control of the craft completely.

The scene I just described comes from the second scenario in The Lord of the Rings: The Card Game's core set. Specifically, this was the moment I first fully comprehended the brilliance of LotR LCG's design. At its best, this Living Card Game takes an ever-growing pool of cards representing characters and situations from across J.R.R. Tolkien's Middle-earth saga and modularly recombines them into a taut, immersive and surprising cooperative adventure. Unfortunately, while the core set contains some of the game's best cards and two great scenarios, it's more of a teaser than a standalone experience. On its own, the core set would fall a couple of stars short of a perfect score if only because it doesnâ€™t realize its own potential.

The game boldly combines a Magic-style expandable card game with a fully cooperative adventureâ€”two notoriously difficult-to-balance genresâ€”and blends them alongside some stellar innovations into a system that is both mechanically and thematically compelling enough to fully merit the over 43 expansions already released or announced, not counting the difficulty-boosting Nightmare Decks. The road goes ever on and on.

Is this a good cooperative or solo game? Is the card pool flexible and varied? Most importantly, does it do justice to the rich legacy of Tolkien's Middle-earth? Yes, yess, yesss, stupid hobbitses.

There are some problems with the way the setting, characters and narrative is presented if you're a Tolkien purist. You can build decks including characters who never met or who lived a hundred years apart. On the other hand, each card tells its story through its abilities, such as Gandalf, who stays in play only a single roundâ€”he has more pressing matters to attend toâ€”but can turn the tide of the game; or a foolish Took who slips back and forth between players, trouble always close behind.

The game's system of providing new scenarios is, frankly, brilliant. The core set contains several decks of Encounter cards representing the enemies, locations and disasters the players have to overcome. Each scenario shuffles one or two of these Encounter decks together with that scenarioâ€™s unique Encounter deck. Quest cards define the win conditions and special rules. This system ensures that every scenario is mechanically and thematically distinct while keeping the number of new cards reasonable enough that Fantasy Flight can include a new scenario and new player cards in every expansion pack.

Speaking of player cards, the game follows the standard format: four colors, or spheres, each with its own pool of characters, attachments and events. Characters remain in play until killed, events are one-time-use interrupt abilities and attachments, well, attach to other cards. The core set provides a solid, standalone 30-card deck in each of the four spheres, or you can shuffle two spheres together into a tournament-legal 60-card deck (official minimum is 50). Don't expect to do any meaningful deckbuilding beyond that until you've added at least a few expansions to the box, though. That's the system's biggest flaw: since each expansion dedicates half its cards to new scenarios, the player card pool expands more slowly than in other card games.

On the upside, each expansion includes at least one Hero, foundational cards with a major impact on play. One of the biggest worries in similar games is how to keep the decks consistent so that you're not screwed over by your opening hand. Heroes solve that problem. Each deck must contain 1-3 hero cards, characters who begin the game in play, have better stats and abilities than normal characters, and generate the resources used to play everything else.

Both Heroes and allies have everything you'd expectâ€”attack, defense, and hit pointsâ€”but they also have a Willpower stat. Reflecting the theme of the books, the most important heroes aren't always the biggest and strongest. Willpower is used in questing, which happens each round: the players decide which characters they'll commit to the quest, then reveal one card each from the Encounter deck. If the combined Willpower is higher than the total Threat of all Encounter cards in play, the players make progress toward the scenario goal and/or clear out locations. If Threat is higher, every player must turn his Threat dial, which represents how much of a priority the good guys are to the all-seeing Eye of Sauron. Higher threat levels attract enemies and can eliminate players from the game.

After questing comes combat. Characters who went questing can't participate in attack or defense, so you'll need to strike the right balance, something the game doesn't make easy: you never know what the Encounter deck will spit out until after you've committed.

Combat introduces another of LotR's strokes of genius. For each enemy attack, the players can choose one and only one defenderâ€”undefended attacks deal damage directly to heroes, bypassing defense. When choosing defenders, you know the enemy's attack strength, but you don't know which Encounter card was dealt face down to that enemy. Its shadow effect might increase the damage or prevent counterattacks, or it might have no effect at all. This keeps combat exciting and has a secondary effect of cycling the Encounter deck itselfâ€”you never know which cards will actually enter play and which will get discarded as shadow cards.

It's a great cooperative game, perfectly balanced between player agency and unpredictability, mentally engaging to the point of stress but also thematically rich. The three core set scenarios exemplify the flexibility of the system: a trek through cobwebbed Mirkwood leads to a rocky trip down the Anduin and a crushingly hard prisonbreak scenario in Dol Guldur.

The problem is that there are only three of them, one's a tutorial, and another is borderline unwinnable (but very fun nonetheless). Just like with the player cards, you'll need to invest in a couple of expansions to make this feel like a complete game. At least the expansion scenarios are worth it, demonstrating consistent quality and innovation, and they seem to be getting better all the time. The core set offers just a tantalizing glimpse of this rich world of peril, adventure and dark places, but little by little, one travels far.