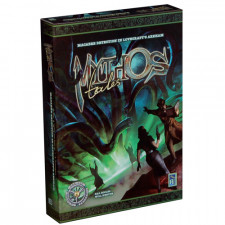 Mythos Tales is an exciting product. While not an official sequel, it's nearly an identical system to the classic Sherlock Holmes Consulting Detective, which was of course derived from the fantastic 1985 Gumshoe. Deduction coupled with sophisticated story is a compelling blend that instantly excites armchair detectives. Toss in some H.P. Lovecraft and you have a real humdinger as we say on the beat.

The structure here is very simple. Players are cooperating to solve a central mystery which ultimately takes the form of answering a series of questions. The questions are unknown until you decide to confront them. This means you're left somewhat in the dark, following the opening statement and ensuing flavor text to their inevitable conclusions. It's all about gaining information threaded throughout entertaining dialogue and compelling mystery.

The game begins by reading an opening discussion which typically lays out the conundrum, people involved, and maybe a location or two. The group jots down some notes and collaborates on where or who they'd like to visit first. The more leads you follow and places you visit the worse your final score will be, so there tends to be some indecisiveness on how important it really is to visit the morgue or Dorian the candle maker.

You have additional assets including a newspaper entry for the date the case occurs, an Arkham directory with names and places, and a map of the city. The newspaper is one of the best elements in the Consulting Detective system because it's a thematic tie-in to the setting coupled with the thrill of scanning stories and digging for hidden knowledge. The fact that every once in a while you see scribbled hidden messages in the margins just adds to the fun. 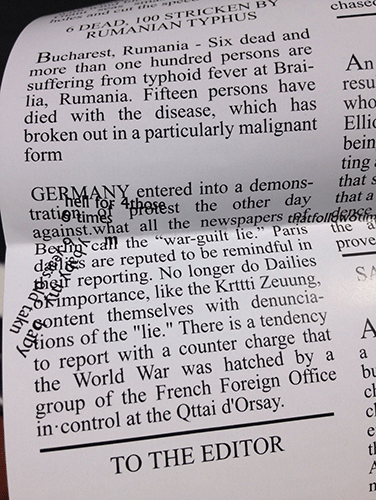 Only the crazies read the newspaper.

The directory is probably the single most useful tool in your arsenal. Whenever you hear a name or place mentioned you'll want to look it up and jot down its letter and number. Then, if the group concurs, you head there by looking up the alphanumeric sequence in the case book. Hopefully there's an entry which spawns more leads and offers some clarity on the mystery.

The map has always been hit and miss. You can play whole sessions and ignore it, however, sometimes the game really wants you to scour the thing and find a certain place to visit. When this works it's awesome and you feel clever as hell calling out the right location and then looking it up in the case book.

Everything ties back to that case book. Instead of being separated into little mini pamphlets, all eight cases in Mythos Tales are bound together into a large tome. It's a little more cumbersome than the previous iteration but they do give you a nice book mark (seriously).

I was also slightly disappointed with the newspapers. They're a glossy material and only feature a single side for each case. Consulting Detective had that excellent newspaper feel and each day's volume was double sided, offering additional shenanigans to explore.

Nitpicking aside, there are many improvements here. The introduction of a time track with a set time limit is appreciated. You could sometimes get lost in the parent game and not be quite sure when you should call it quits and head to the questions. Here, you have to cut it loose at a specific time so the pressure element is a little harder.

Additionally, it was nearly impossible to beat Sherlock. You'd feel like an orphan in the street dressing up as a detective and imitating your hero, never quite garnering attention. Achieving a satisfactory score in Mythos Tales feels much more honed and fair. It's nice not getting slapped in the mouth after an exhausting hour long riddle.

I'm also a big fan of the requirement mechanism. This new deck of cards is numbered 1-19 and certain passages will tell you something like "take requirement cards 1 and 2". Then you may run into an entry later where you need a key or a pass phrase, represented by those cards. This is a simple concept but it adds a nice touch of depth and branching narrative. It alleviates that occasional feeling of being a passenger and gives you more eggs to hunt down in the tall grass. 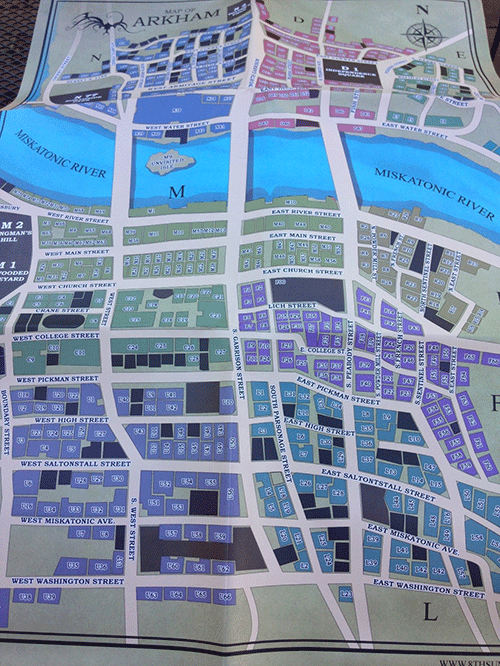 Whatever you do, donâ€™t drink out of the Miskatonic River.

Beyond all these little nudges and edits, what it really comes down to is the writing and story. This is a game that lives and dies on the gravitas of its central quizzical narrative. Mythos Tales not only is a worthy successor to Sherlock Holmes, in many respects it's simply stronger.

The fact that it avoids the issues with translation errors is a huge plus. This allows it to convey its interesting paths and story branches clearly, which is important to maintaining atmosphere. Mythos Tales is a darker game than its predecessor and it's ultimately more compelling as it injects that subtle element of science fiction into the bloodstream.

What's outright fantastic is that this may be the first true Lovecraft game. Titles like Arkham and Eldritch Horror take up H.P.'s name but they do so with a huge dollop of pulp as you wield Tommy Guns and kick Shoggoths in the junk. Instead, Mythos Tales is thoughtful and creepy. Dread punctuates the scene, not reeling action. You're just as likely to run in terror from a confrontation as feebly attempt an attack.

It's also nice that the supernatural starts off with a subtle approach and ramps it up as you progress through the cases. It avoids feeling cheap or dull by easing you into the dark waters. This also gives the first few cases a slight True Detective vibe. By that I mean Matthew and Woody, not Colin and Vince-Iâ€™m not crazy.

Mythos Tales is a winner. It takes a strong base and injects a twist in a really engaging way. This game works solo or with a small group and it will keep you coming back as you lap up each case like Starvin Marvin hitting a buffet.