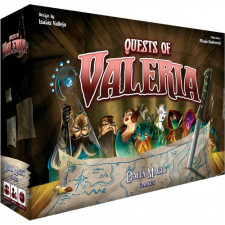 The Valeria series is like the Walt Disney Company of card games: stolen ideas repackaged with iconic artwork. The series progenitor, Valeria: Card Kingdoms, was kissing cousins with Machi Koro, and Villages of Valeria is just Race for the Galaxy if you squint. The newest iteration, Quests of Valeria, is a little different, taking obvious inspiration from Lords of Waterdeep but ditching the worker placement in favor of a Through the Ages-style open card draft. This is a bit of an odd choice: previous Valeria games have taken popular, accessible mechanics and added complexity, or at least the illusion of it, while this one pares its concept down to the bare basics. Unfortunately, it accidentally shaved off most of the fun. 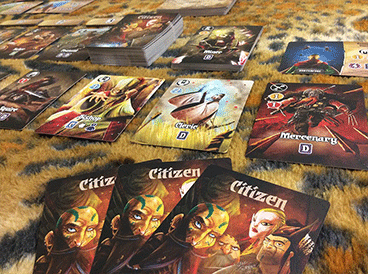 The art is about the only thing in the game that has a soul.

Thereâ€™s no engine-building here, as you might expect if youâ€™ve played other Valeria titles. Instead, Quests of Valeria is about comboing instant-use abilities to make the most out of the two actions you get each round. Players are Guild Masters in the city of New Shilina, hiring characters from the Gutrot Tavern and dispatching them to complete quests for the glory of Valeria. Quests come in four flavors--Adventure, Battle, Commerce and Subterfuge--and each player has a secret Guild Master card that gives bonus points for two quest types. Each character card has a class icon and provides a mix of resources; to complete a quest, you must discard a team of previously hired characters from your own guild to satisfy all the questâ€™s class and resource requirements. Completed quests grant victory points, and the player with the most VP--from both quests and their secret identity--is the winner.

In addition to the characters in the tavern, each player maintains a hand of cards. The Hire action requires players to discard characters from their hand or guild equal to the cost, which depends on the hired characterâ€™s position in the offer. Newly arrived characters are more expensive, costing up to three cards, while the oldest character is free to hire each round. Some characters grant bonus actions when hired, and a shrewd Guild Master knows how and when to chain these bonuses together for longer, more efficient turns. For example, if you plan to complete a quest this turn, why not start by hiring the Bogatyr, who grants a free Quest action? Completing quests also cascades into bonus actions, and on a good turn, you can squeeze seven or eight activities out of a single action. 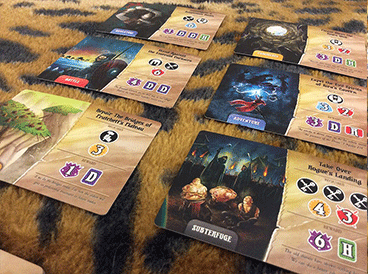 The quests vary in reward and difficulty.

Of course, doing so will likely empty out your hand and your guild. One of my issues with the game is that there are no permanent powers or lasting bonuses, so the slate is essentially wiped clean each round. This dovetails with my other complaint: since the cost of characters is solely determined by their position in the tavern, no character is truly better or worse than any other. You might get a big chain of actions now, rapidly growing your guild, but the net impact on the game is negligible. Of course, hiring lots of â€œweakâ€ characters puts you in a more flexible position than grabbing a few â€œstrongâ€ ones, but the combo actions themselves arenâ€™t getting you anything. Itâ€™s comboing for comboâ€™s sake. The quests offer a little more variety, with their variable costs, VP rewards and bonuses, but most of the time, youâ€™ll just grab whichever one matches your Guild Master.

And then itâ€™s over. Quests of Valeria utilizes one of my most-despised game mechanics: the player-triggered game end. This is in contrast to a pure race game, in which the player who triggers the end of the game is also the winner. In Quests, the game ends whenever any player has completed five quests, but the person who triggered game end might not end up with the most VPs. This leads to all sorts of issues, including kingmaker situations and chicken races, and the only thing it adds is the minor strategic decision of whether to rush the game with easy, low-VP quests or try to snare some big fish.

All in all, Quests of Valeria is a hand-management combo-quest without an endgame. If this is your first visit to Valeria, you might want to try one of the other destinations first.