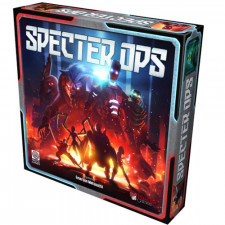 The collective cyberpunk wisdom teaches us that one day massive titans of corporation will one day enslave the human race and bring about a capitalist fueled pre-apocalypse of massive dread with crushing poverty being the consolation prize for the little guy. The designer of Specter Ops was listening that fateful day in school and gives you an opportunity to pre-emptively enact vengeance for the future wrongs committed by the likes of Google, Microsoft, and Crocs.

Specter Ops is a hidden movement game that shares a lineage with Letters From Whitechapel and Fury Of Dracula, traceable back to the venerable classic Scotland Yard. From a macro view it's working in the same box and doesn't reach outside of those walls for any game-changing modifications or overarching structural overhauls. At the micro level a whole host of twists and clever sub-systems break way for a tense and stellar experience that manages to define its own niche with strong personality.

The game completely owns its theme. With a lovely embossed board full of exceptional visuals, solid detailed miniatures and just a few choice components you are pulled into a dark dystopian setting that pumps Rooster Booster into your veins and fully envelops the players. The Agent player controls one of four distinct characters with a selection of equipment as he sneaks around the ominous facility marking his movement by coordinates on a gridded piece of paper. His goal is to activate three of the four available objectives and then escape before either 40 turns pass or the Hunters corner him and tear him apart like a pack of wild dogs set upon a crippled deer.

The Agent player is given a suite of gadgets to invoke stealth, boost movement or stun would-be aggressors. These items are hidden from the Hunters who stalk about the map trying to funnel the vandal into their net and cut off circulation. Each of the four available Hunters boasts special powers. The Wolf is able to sniff nearby enemies and The Prophet can peer into the depths of time to unravel the future and past. Their main tool is a four-seater vehicle they can drive through limited paths in the warehouse to seriously scoot from one location to the other. There's also this clever mechanic where a Hunter in the car can utilize its motion sensor, detecting the cardinal direction of the Agent in relation to the transport. The shadow-dweller can negate detection by moving two or less spaces as opposed to the standard four presenting him with the difficult choice of speed versus caution.

The pace and feel of the game starts off pretty loose as the Agent books it down one of two vectors of the board, veering left or right on either sides of the North-most street. Hunters typically careen at breakneck speed in their vehicle before setting up shop and locking down the grid. The roller coaster keeps ascending as the Agent player must decide how best to avoid being detected and getting around the Hunter's innate powers to remain hidden.

The tension begins to boil and will eventually erupt as the Hunters tighten the net. This immense pressure of being only spaces away from a Hunter and having to do your best to sneak out, typically by utilizing mind games and tripping up expectations, is remarkable and praiseworthy. This is a natural quality of this sub-genre of game but the design and development that went into this Plaid Hat product is outstanding. There's a tight pace to the game that flows with the expenditure of limited use Agent items and a stiff health track so that games more often than not come down to the wire. That's not to say that the game is overly balanced so that players can meander and do whatever they'd like, guaranteed some modicum of success. Rather, with competent play things tend to heat up precisely when you want them to as if youâ€™re on a stampeding train ready to collide with destiny.

The brilliance seen in the aftermath is that you will go back to earlier turns in the game and you can pinpoint precisely where one group went wrong and a bleeding Agent slipped the net or stumbled and had to burn his three items of equipment far too early, causing the harassment to snowball later in the game. The pressure and intensity of the immediacy of tactical play is equally opposed by a really solid degree of overarching flow and momentum established by a chain of thoughtful decisions. Specter Ops never screws you or steals your lunch money, rather it slaps you on the back of the skull for failing to pass the test. Old school corporal punishment at the hands of The Prophet would make even the most stoic of nuns crack a smirk.

Player count is an oddity with this game as it tends to surprisingly excel at all numbers, albeit with a few wrinkles. Without a doubt two and five would be my strongest recommendation and they offer very distinct experiences. At two you have a tight chess-match of back and forth mental haymakers in a tense and very fast 60 minutes. With five the game is altogether a different animal as four Hunters take on a single Agent. The rub is that one of the bad guys is a traitor who the spy can sneak past and may even reveal to cause further shenanigans. My five player games have been outstanding with lots of accusations flying across a vibrant table and lots of handwringing. Trust is in short supply, emotion is on stage and you remember why you call yourself a gamer.

Specter Ops is a fine but somewhat less interesting experience with three or four. Three is a two player game with a bit more socializing, a bit more length and a watering down of tactical decisions as you have to share the burden. Four players works pretty well but five is so much better with both substantially longer than the two player experience. Balance seems reasonably strong throughout, owing to that heavy development cycle no doubt. The only niggling issue I've seen arise is that certain combinations of Hunters seem to fare much better at low player counts. I would wager the Prophet is the strongest without a doubt at three or less players, as his Post-Cog ability partially negates the Agent's opportunity to avoid the motion sensor and his Pre-Cog power is enormously influential when objectives are known to both sides, a quality found in the two and three player version. Even with this quirk, the game doesn't feel unduly harsh or broken and always succeeds in bringing the heat.

There is an excess of fantastic in this title but also a delicious minimizing of bloat. The rulebook is a measly eight pages, the core of which could be fit on a couple of index cards. Despite a number of equipment and special powers, we're offered only a handful of tokens further aiding in the de-cluttering of the thematic ideal. By offering a compact, focused design full of such flavor and setting, Specter Ops is a game that demands attention, even if it doesnâ€™t quite replace any of the masterpieces of hidden movement that inspired it.