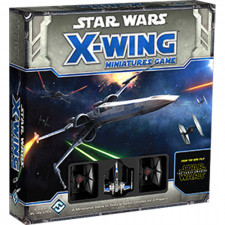 Kylo Ren, Captain Phasma, Poe Dameron - If you don't recognize these names then you've been living in a cave. And not the type of grotto full of Dagobah swamp wisdom, but the real life soul killing bat shelter kind. Episode VII is on all of our brains and getting even a taste of that forbidden fruit in our precious X-Wing is enough to set your loins on fire.

It's important to realize that X-Wing is still the game we love. This new core set comes with clarified rules that consolidate all of those annoying little rule cards into one pamphlet. Itâ€™s functionally the same maneuver templates you have strewn about your bedroom. This is not a 2.0 or a revised version and it doesn't invalidate what we already have.

The only meaningful change in terms of core system is the inclusion of a new damage deck. This completely replaces the previous set of cards and should be included in your games immediately. This seeks to fix an existing issue in that several critical effects would offer no impact on certain builds. Your TIE Academy pilot wouldn't care if he lost his pilot ability because he doesn't have one. Wedge was good to go if his secondary weapon was disabled because he's lighting up your frail hull with his quad laser cannons.

These unreliable effects were replaced with more consistent and universal applications that retain the significance of a critical hit. While a touch of flavor is certainly lost, this is a great revision that brings the oomph back into a set of nasty effects that command respect. This does a great job of realigning the balance of abilities and card text that rely on the critical hit to where they should be.

X-Wing veterans will also find a set of six new asteroid shapes in this set that they will want to include in their obstacle mix right away. These tend towards the small side, adding a touch of variety and additional strategy considerations to map deployment. This inclusion was clever and certainly welcome.

Asteroids and damage decks, those are just a couple of surprisingly entertaining trailers before hitting the main attraction. You're here because you want to fly Poe Dameron with BB-8. Boost and barrel rolls on an X-Wing? Bananas.

The T-70 is unequivocally powerful. Itâ€™s more sturdy than the old T-65 with an additional point of shield, it is HIGHLY more maneuver, and it has access to a new type of targeting upgrade. So for less than 5 points more than their equivalent, why would you fly a T-65? Beyond synergies and pilot abilities - you wouldn't.

Fantasy Flight has done a fantastic job of providing an invisible hand to guide the balance of this game over the past several years. They've brought underutilized ships back into the foreground and shown an aptitude to get things right. The T-70 then comes across as a bit of a misstep in that it completely overshadows its predecessor, a ship that forms the namesake of the game.

As Fred Durst belches, "You gotta have faith" in FFG. What this primarily signals is that the fix to the T-65 is coming and hopefully soon. With the quickly approaching release of The Force Awakens there was probably an immense wave of pressure to get this product out on Force Friday and start moving units. That pull likely had a ripple throughout their release plans and weâ€™re stuck the beautiful fallout.

Everything else in this package beyond the T-70 feels very balanced and properly implemented. The new TIE/fo fills an interesting hole on the Imperial line and is strongly reminiscent of a Chardaan Refit A-Wing. It's still zippy and highly maneuverable, paired with those crazy things Rebels call shields. It appears as though when the axis of evil crumbles and you can no longer spit out pilots and ships like a Chinese factory, you have to start protecting your own.

The TIE/fo is certainly more fun than powerful. It feels like itâ€™s roughly worth the point cost but it certainly doesn't invalidate the existing TIEs which are cheaper and better suited for swarming. Rather, we have some new and interesting pilots that provide yet another option in force building and construction.

As a newcomer to this brilliant design you've now been gifted an excellent starting point. The recommendation of grabbing one of each core set is the most efficient and effective buy-in to getting the full X-Wing experience right off the bat and with minimal redundancy. You will want the iconic ships of old and you won't be able to help yourself in reaching for those new miniatures which are beyond pretty. I haven't even touched on this yet but the new models contain the best paint jobs we've seen in a long line of expertly painted mass produced plastics. Those sleek black and white TIEs massage my soul and leave me tingling at night.

The Force Awakens. You're going to see it 15 times. You're going to re-enact those breakneck surface battles and edge of the seat engagements. This new core set has arrived like a red carpet ushering in the new era. Instead of waving small plastic toys in the air amid a crescendo of "PEW PEW", pick up some dice and crush the New Order.