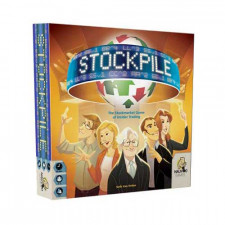 When I saw Stockpile on Kickstarter a couple years ago, I toyed with the idea of backing it for quite a while. Ultimately, I decided against it as I wasnâ€™t sure about this new publisher and had enough disappointment from other underwhelming Kickstarter games. A year later, on the last day of Gen Con, I wandered by the Navoo booth who was demoing Stockpile. Hey, that game! I played a quick demo, politely thanked the guys, and said Iâ€™d be back to pick it up later. I donâ€™t think they believed me as thatâ€™s the con equivalent of â€œSure, we can hang out again. Iâ€™ll call youâ€¦â€ after a date. But, I did return and buy the game. After returning home, it was among the first of my haul that got played. And the week after. And the week after that. And itâ€™s still on regular rotation today.

On the surface, Stockpile sounds like a fairly standard stock market game: buy low, sell high, and make the most money. The round proceeds by passing out share cards, company cards, and market forecast cards. The pairings of the latter two are what causes the market to change. Then, everyone forms stockpiles to bid on. This is the only way you can acquire new shares, making it important that you bid wisely. Then, you can sell stocks before the round ends. You play a number of rounds according to the player count, then whoever has the most money at the end wins. Snooze fest, am I right? Well, yeahâ€¦ except for just a few unique features that push Stockpile over the edge of mediocrity.

More exciting than it looks.

First, Stockpile has this wonderful insider trader feeling throughout the game. Some information about what is going to happen to the market is public, but some is also private. There is something satisfying about having a secret and watching your opponents hold onto their shares in a company that only you know is about to crash and burn. And, just like in the real stock exchange, you can point and laugh at them when this happens. 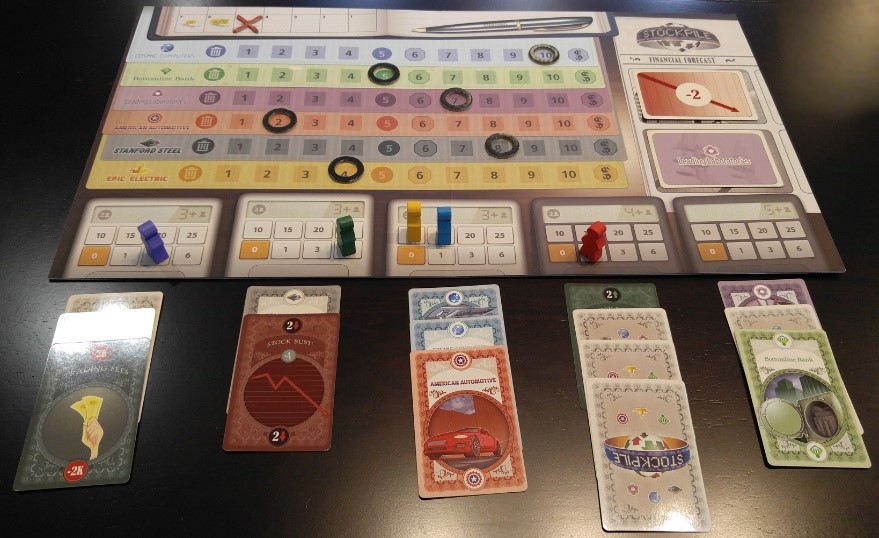 The second unique aspect of Stockpile is how shares are acquired. As mentioned above, you only acquire shares from bidding on piles that players form during the round. To add to the thick layer of intrigue in the game, one share is placed face up and one is placed face down. You can never be quite sure if your opponents are trying to set themselves up for a big score or sabotage you with trading fees that you have to pay. After all the stockpiles are created, players bid, continuing to go around until everyone gets one. This auction can be devious as you try to screw someone over by outbidding them, forcing them to go elsewhere because they canâ€™t afford to one-up you. And sometimes, you think youâ€™re being clever by upping the bid, but end up just screwing yourself over instead. 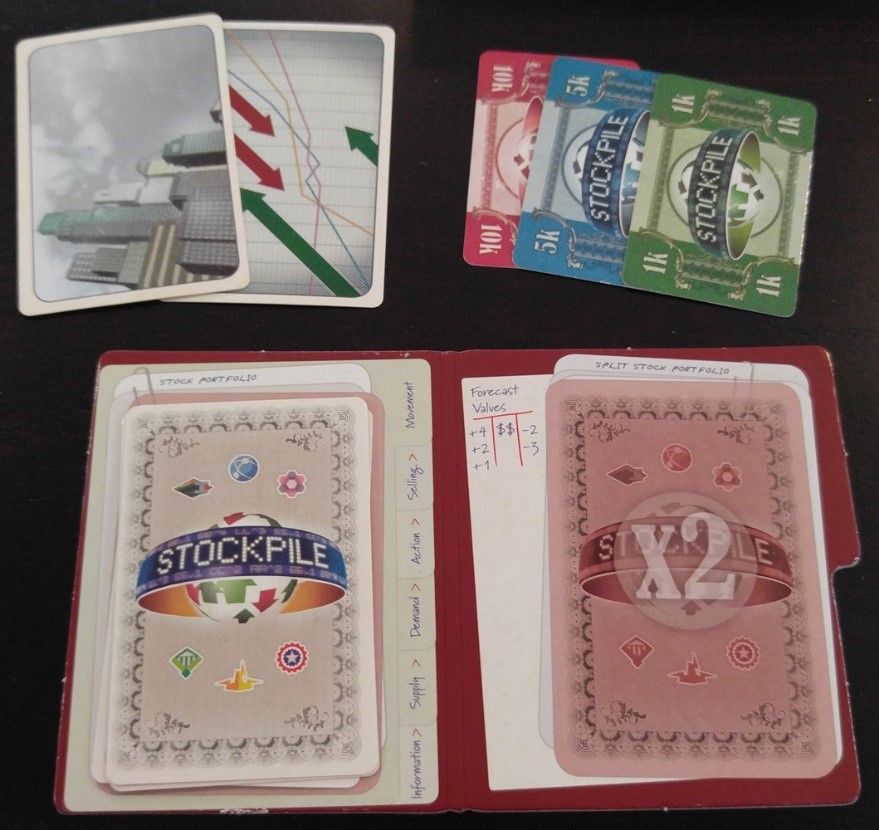 Come on, now this is pure gaming excitement!

Thirdly, player order really makes the game dynamic. Because the first player rotates every round, this changes the choices you make during the sell phase. The three players before you all just sold off their shares of Cosmic Computersâ€¦ What do they know?! Should you get out while you can?! Being first isnâ€™t necessarily bad though. Sometimes you can manipulate others into dumping their shares by selling off only some of your own. Sure, going last is nice, but so is first, second, third, or fourth. No position makes your decisions any less tense.

Stockpile also offers you some good variety in setup. There are investors, which act as individual player powers. I usually feel like this mechanism is tacked on and gimmicky, but playing with the investors is a must. For example, one investor allows a player to play both of their cards face down; another lets you make money from trading fees; and another gives the ability to make dividends payout for whichever company that player chooses. This completely changes the decisions in the game. Though the rules suggest playing your first game without investors, Iâ€™d say go for it. They hardly add much complexity to the game and the payoff is worth it.

Additionally, the board offers you two sides. On the basic side, all the company tracks are identical; on the advanced side, they are not. Certain companies are more stable whereas others are more boom or bust. Although the advanced side adds some nice variability, itâ€™s not necessary to play with all the time. There can sometimes be a runaway leader depending on the distribution of shares and the luck of the forecast draws. This brings us to Stockpileâ€™s biggest problem: it has a healthy sprinkling of randomness, which limits the control over your stock choices. If you take this in stride and just go with it, itâ€™s not a glaring flaw. Moreover, thereâ€™s enough other stuff going on to help mitigate it. In games Iâ€™ve done really poorly in, I canâ€™t say that it was purely because of bad luck; I usually look back and see some subpar choices made along the way that affected things more than the randomness. Still, this might be irksome to economic game purists who want more control over their earnings.

Overall, Stockpile has a wonderful popcorn-like essence to it. Itâ€™s light, but satisfying, and you canâ€™t help but go back for more. Plus, the game always managing to clock in within an hour, never dragging on or outstaying its welcome. Itâ€™s as engaging from the first turn as it is at the final selling of shares. This is one of the things that draws people in to it. Iâ€™ve played Stockpile at all player counts, with gamers spanning the gaming spectrum of casual all the way to Fantasy Flight fanboys, and they all enjoyed it. Although this may not be a perfect metric of a gameâ€™s appeal, it seems like a good enough argument for Stockpile to be mainstay on anyoneâ€™s shelf.