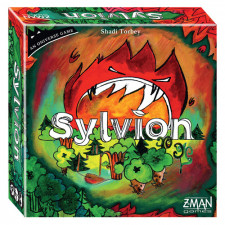 From the moment you peel away the shrinkwrap, Sylvion is pure theater. The lid of the small, square box sighs like wind through the branches as you lift it to reveal what looks like a pop-up book page or puppet theater stage. Four individual layers depict bright orange flames licking a verdant woodland framing a turquoise sky. You fold away the first three layers, actually elaborately cut box flaps, and the words "book of rules" come into viewâ€”the scene's background is really the game's rulebook. When you pick this up, you discover a custom-molded, felt(ish)-lined insert sheltering two thick decks of cards and a scowling plastic token in the shape of a red flame. (This is Ravage, the game's villain, and it's mostly for show, only used in one variant so minor that the rules call it an "Appendix.")

As you can probably tell, the visual presentation is a big part of what makes Sylvion stand out. Like the previous games in Shadi Torbey's "Oniverse" series, it was illustrated by Ã‰lise Plessis, a fantastic artist who, for now, is the Oniverse's best-kept secret. Her watercolor and pastel artwork combines simple line drawings with textured colors that bleed and bloom together. They are childlike and surreal, perfect for the series' setting (the realm of dreams), and she is particularly on point in Sylvion. Seriously, visit her website (eliseplessis.com) and see if you can resist the sample artwork.

Sylvion includes dozens of unique illustrations, but their dominant colors instantly identify their card type (Fountains, Trees and Animals in the Defense deck, or Elementals and Events in the Ravage deck) and provide an evocative visual representation of the game's theme: defending a magical forest from an inferno of living flame.

If that doesn't have you hooked, then you should know that there's a good game behind all this visual flair. Not a good game for everyone, mind; Sylvion, like the other games in the Oniverse series, is primarily a solitaire game. Only you can prevent forest fires. There's a 2-player cooperative variant, but if you hate solo games or you never game with fewer than 3 people, there's no reason to continue reading.

On the other hand, if you are looking for a good two-player cooperative game or an introduction to 1-player gaming, this is one of the best places to start (another being the solo-only Friday by Friedemann Friese). Like Onirim, Sylvion's quick and simple to learn, although it feels a lot heartier than the earlier Oniverse games. It takes roughly a half hour to set up and play, and there's an Introductory game mode to ease in players of any skill level.

Like all Oniverse games, Sylvion also includes several built-in "expansions" or modular variants to enhance replayability. Though Sylvion's two mini-expansions (plus the Appendix mentioned above) seem like a ripoff compared with the seven in Onirim's second edition, there's a major difference: Sylvion doesn't need either of its expansions to feel like a variable, replayable, and satisfying game. In fact, although they're nice to have, these expansions feel like they're only there because we expect it from an Oniverse game.

Sylvion is one half card drafting (the half that's absent, understandably, in the Intro gameâ€”you can't draft when you have no clue what the cards are worth) and one half tower defense. The defense part is lane-based, like Plants vs. Zombies, with nasty Fire Elementals constantly pouring in from four Ravage decks on the right side of a 4x4 grid and marching steadily toward the left. The Ravage deck also contains malicious Event cards that mess with your defenses or make the Elementals stronger or faster. The second included expansion adds three especially terrible Event cards, like an acid lake that permanently shortens one of your lanes, as well as the benevolent Geyser, which explodes to take out a whole row of Elementals.

The thing you're defending is Sylvion, the grand forest. Your defenses are stationary: Fountains, which also have a power level and meet the flames in direct combat. The strongest combatant snuffs out the other one, or if they're evenly matched, they destroy each other in a puff of steam. If you allow an Elemental to escape off the left, it deals 0-4 damage (based on its power level) to your edge cards, represented by flipping them from their "Bloom" to their "Desolated" side. If you take more damage than your 12 edge cards can handle, you immediately lose. If you survive until the Ravage decks are empty, the remaining Elementals have completed their assault, and you end with all 12 edge cards on their Bloom side, you win. Don't worry if you take a few hits; any surviving Trees you've planted during the siege contribute to the grand forest's regrowth, restoring desolated edge cards to health.

Some strategies are obvious. For instance, it's easy to see that planting Trees is useless in the early game: with power of 0, they're destroyed the moment any Elemental touches them. But even the Introductory game offers much to consider. Each card in your Defense deck has a cost, and you pay it, Race for the Galaxy style, by discarding other cards from your hand. Aside from Fountains and Trees, the Defense deck contains Animals with various special abilitiesâ€”Hedgehogs build a defensive wall that cancels one Ravage card before it enters play, wise Owls let you draw three new cards (for a net cost of two), Squirrels let you peek at and rearrange the top two cards of the Ravage decks, and Doves discard the topmost Ravage cards for free. The powerful Stags are the only way to restore Bloom to your edge cards during the game, their effects boosted by planted Trees.

The strategy really germinates when you reach the Advanced game, which introduces Mobilization and Demobilization. In Mobilization, you draft your Defense deck in rows, Coloretto style, with random cards disappearing periodically to force you to prioritize. There are obvious and less obvious synergies to explore, but the drafting method forces you to take the good along with the bad. This is especially true when you include the first expansion, which adds Betrayalsâ€”dead cards that cripple your hand sizeâ€”and Incredible Feats, powerful always-available, one-time-use cards that sometimes introduce alternate win conditions that are impossible without highly specialized decks.

Demobilization, appearing on some Ravage cards and whenever you reshuffle your Defense deck, adds another excrutiating decision point: you must remove cards permanently from your Defense deck, either two of your choosing or one determined by luck. Useful at first, since they let you do some deck pruning, Demobilization effects can be heartbreaking if encountered at the wrong moment, and they temper the otherwise powerful Owl cards, which speed you along toward the next reshuffle.

It's a great solitaire game that's just heavy enough to be satisfying for the 30 minutes it lasts, and the endless variability of card drafting more than makes up for the perceived lack of built-in expansions. The two-player variant is surprisingly brilliant, too. Adding another layer to the already complex decisions you face, this variant has both players drawing separate hands of cards from the shared Defense deck. They take turns as active player (the one who draws and plays cards that turn), but instead of paying for cards from your own hand, the other player has to discard cards to pay the cost. This inspires some great collaborative discussion, especially if play with hands hidden, and new strategic considerations: if you play every card in your hand, you leave your partner bankrupt on their turn.

With eye-catching art, enduring variability, toasty solo appeal and even hotter two-player co-op play, Sylvion is the total package...as long as there are fewer than three of you.