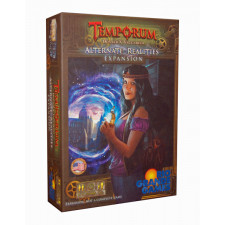 Celebrated designer Donald X. Vaccarino is no stranger to expansions. His most notable game Dominion is one of the most expanded games there is. But I was a little surprised to see an expansion for his time-travel game Temporum, because Temporum was the sort of game that impressed mildly before fading from my radar. I gave it a mildly positive review at the time, then never looked back. The response to the original game was a sort of collective shrug from other players and my own friends, and I’ve picked up on a similar response from the online community. But here we have the Alternate Realities expansion, which could have been an opportunity to further develop some of the solid concepts in the game.

Like many of Mr. Vaccarino's expansions, it's a "more stuff" kind of offering. It shouldn’t surprise me too much though, given that Vaccarino has already shown himself able to not only able to design games with highly variable setups, but also games where that variety can be easily leveraged into something much bigger. He’s also shown himself more than capable of preserving the basic framework of a game, preferring to inject new mechanics on specific cards rather than making large-scale changes to the game. Both of these patterns hold true with Alternate Realities. The broad strokes of the game are essentially the same. There are still four different time periods with a range of different branching timelines. The players are still trying to move their little crown markers to the end of the track through a process of travelling back in time and essentially switching to the other branch of that location, changing every successive time period. 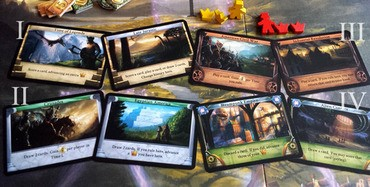 Yep, more of these. It's that kind of expansion.

Unfortunately, this is a "more of the same" kind of expansion as much as it is a "more stuff" one, adding several new zones including some unusual ones such as an America settled by the Greeks and some less unusual ones such as the ubiquitous Zombie Apocalypse. 60 new player cards are also included, including one where you get to "Meet Your Younger Self"- uh oh, paradox! The net gain is that an already variable game is imbued with more setup variety, and that is definitely a desirable outcome. Those new cards provide a few new mechanics too. Some new locations withhold their effect until enough people have visited them, and then they grant an effect to everyone. Others allow you to set up your time-travelers headquarters in a specific timeline, granting a little extra cash. These new mechanics give their locations just a little more personality in game terms, although the different effects still tend to run together during the game. There isn't anything here that surprises.

Temporum has always presented a view of time travel mastered, with few risks and lots of calculated strategies. That’s alright in a game context, but I still feel like it could use some more wildness along with the increase in routine variety. If time travel in movies and TV shows has taught us anything, it’s that the consequences should never be this predictable.

One gets the impression that Vaccarino entered this expansion with a lot of different things he wanted to try for this game, but not much assurance that he’d get another shot at it. The result is an expansion with a lot of different elements at once, which goes against his more focused expansion design in Dominion. Still, fans of the original game may find a lot to enjoy here, particularly if Temporum is a regular session feature. If you like your time travel risk-free, you probably already liked Temporum, but I can't quite say that there is anything here that is particularly remarkable or that will elevate the status of the game for the unconverted.