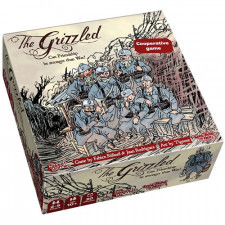 Very few game designs approach anything resembling Art with a capital A. Rare is the game that demonstrates that the medium is even capable of expressing the kinds of emotional power, metaphor or beauty that painting, sculpture, music, film and writing achieve all of the time. Yet we have seen in the past with a game like The Mushroom Eaters that games can be art, it is possible. Fabien Riffaud and Juan Rodriguez get it - The Grizzled is without a doubt, a work of Art. Capital a.

What this game does so well- and in fact artistically- is that it connect its participants on an emotional level. Its structure is loosely comparable to the popular Hanabi, but it transcends mechanics to reach into your heart to stir affection, despair and empathy. It doesn't generate that passionate connection automatically; rather it relies on you meeting it just over half-way to bridge the gap between strategic exercise and stirring sensation.

This gripping psychological touch is accomplished from multiple angles. The first and most readily observed is the absolutely fantastic graphical approach. The French cartoonist known widely as Tignous was among those murdered in the horrific attack on the Charlie Hebdo offices. But he left the gaming world a momentous gift to be cherished after his departure. This tragedy lurks in the background of the game intrinsically connected to its emotional ecosystem.

World War I is an overlooked and often misunderstood conflict in the United States and this seemingly esoteric subject matter may unjustly turn more than a few away from a superlative experience. But this is an approachably light game from a mechanical perspective and no intimate background knowledge of the war is required. Its greater themes extend to brotherhood and family, camaraderie being more useful and imperative than a bayonet or rifle.

The anguish in The Grizzled is immediate. Each round brothers in arms cooperatively play Threats from their hand into No Man's Land with the precious goal of survival. If three of a similar symbol ever show up then the abstracted mission is failed. Mentally grappling with what card to play before sliding it onto the table with a huge wince is as tense as the most draining of cooperative games. The act of choosing the threat that will have a serious impact on your fellow soldierâ€™s lives by negatively chaining off the cards they have hidden in their own sweaty palms is evocative and chilling. When you reveal the chosen obstacle it's as if you've just called an artillery strike down upon your groupâ€™s heads, the table seeking refuge in the darkest of holes.

The repercussions of battlefield stress are tied intrinsically to the mechanics through psychological effects deemed Hard Knocks. Phobias which add a permanent additional shell symbol to the center row and personality disorders such as tyrannical behavior via seizing control will litter your experience. Not setting, but theme flows directly from a simple system and hits you hard in the gut, taking your breath away.

The weight of this impact is facilitated through the enforcement of silence. While some discussion can still occur, for the most part the game has you shut the hell up and observe. Contemplate your existence, what horrors these young men went through, and what profound impact the experiences provided cascading through their lives.

This blanket of deep thought crafts a vastly different feel than most anything else I've played. It's the dark pall of a funeral, mourning the death of a group of heroes that are on the edge of the Reaperâ€™s scythe. It connects you to the trauma of the Great War through your present actions and instills that sense of loss and struggle.

Yet there is a light buried deep in the mud and struggling to get out. The Grizzled wants you to find peace and solace not through that suffocating silence but through the extended hand of your brethren. The only way to overcome the trauma is through an offer of support tokens, again performed without coordination. Overcoming clumsy planning and triumphing in the face of tragedy is magically empowering and is the reason to push through the anguish and fear. You succeed not of your own volition but by leaning on another.

By offering an end game that sits in a suspended quantum state of Tragedy versus Comedy, it moves you through Hell and into something that might be redemption. It's a Rorschach test of emotional depth. The most important part is not your interpretation, but that the game even puts that ink blot down in front of you.