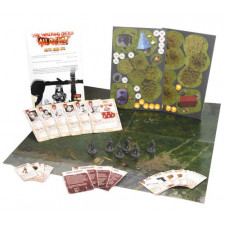 The Walking Dead: All Out War – Days Gone Bye Review

If The Walking Dead: All Out War is the best ruleset Mantic Games has released, Days Gone Bye is the single best product in that line. While much of the core set was providing the necessary implements to hit the ground running, it presented a single scenario that offered some replayability but didnâ€™t push the game to its fullest potential. This expansion rectifies the situation by diving into the narrative of the Atlanta camp arc of the comics; Rick reuniting with his family, forging relationships with Glen and Dale, and breaking those with his old buddy Shane.

Days Gone Bye is comfortable nudging the weight of the rules just a smidge northward. Now that players are accustomed to the intricacies of threat and walker movement, the game throws supplemental details concerning fire, yes you can set the dead ablaze, as well as repairing and smashing mechanical objects. There are also new terrain rules and the accompanying cardboard punch-outs for forests, tents, and campfire.

We also have a few new playas entering the scene (I apologize, Iâ€™m currently spinning some Eazy-E). Dale, Jim, Allen, and Donna offer new characters to include in your skirmish groups as well as provide necessary components for several of the scenarios found within this release. Alongside the plastic thereâ€™s also new event cards and items which you can mix in right away or hold back until the Days Gone Bye campaign instructs you to add them. Finally, a fresh paper map with a generic grass and woodlands background is offered up. 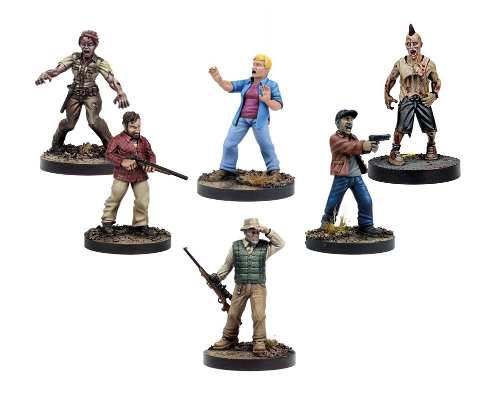 Who doesnâ€™t want to defend Donna from a Mohawk walker?

All of these components are useful in their own right. Even if you pass on the story aspect of the expansion, youâ€™ll find ample use in buffing out force lists and changing up the battlefield. Variety is strong and a worthwhile investment.

However, if you ignore the narrative campaign youâ€™d be the mayor of crazy town. Days Gone Bye offers a great deal to All Out War fans, but its comic-based scenario series is the haut monde of the package. Youâ€™ll scavenge guns from the Atlanta police station with Morgan, make supply runs with Glen, and defend the camp. The story builds and culminates in the scuffle with Shane in the woods.

The only area you can peg this product for stumbling like a drunk walker is in the reliance on side purchases. Many of the scenarios call for characters not found within this expansion and assume you will be picking up boosters to round out the party. While it would be easy to attribute greed in this regard, I donâ€™t believe that to be the case. Clearly price was a factor and making this a bigger release than the core set would have made for a difficult retail situation. Mantic throws a bone to the consumer by offering substitute point values so you can field whatever models and characters you want. This acts as an alternative to buying product, but it also lets you go crazy with â€œwhat if?â€ scenarios. You can toss Rick on his horse into a camp defense scenario and trample some dead Falcon fans. Or maybe have Morgan arrive at the Atlanta camp and forge a new path as the bandâ€™s leader. This certainly extends replayability and function to an already brilliant release. 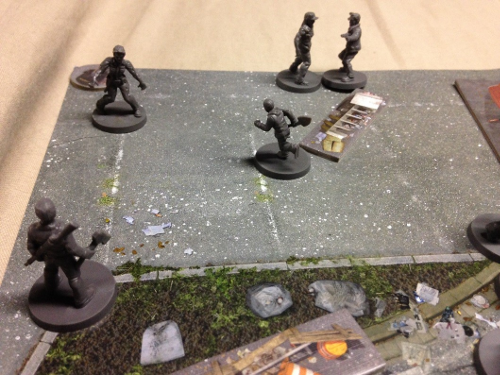 Morgan, Duane, and Rick battle stragglers as they near the entrance to the Atlanta PD armory.

Once you dive into this narrative campaign you will start to realize the full vision of this game. Outcomes feed into the next play and influence decisions. The stakes are heightened which means tension increases. If you lose the Atlanta Police Department run with Morgan and Rick then you must pay five more points for each firearm you purchase the rest of the campaign. If you have to amputate Carlâ€™s arm when everything goes FUBAR, little dudeâ€™s running with a stump for the remainder. These are both brutal, and completely awesome.

Itâ€™s also excellent to see the game continue to embrace solo and cooperative play. Five of the six scenarios are playable on your own, merely fighting off a timer and hordes of undead. They manage to feel unique and vibrant despite a deck of cards and simple noise rules running the opposition. The final showdown with Shane is the only encounter requiring an additional participant.

If this game continues down the path of fully embracing the story arc of the comics, Mantic will truly have something special on their hands. Gameplay is dynamic and ferocious as hell. Pairing that with an intriguing narrative context broadens the appreciation of play and will bring players back to the table again and again. Whether youâ€™re a crossover fan of The Walking Dead and the Real Housewives of Atlanta, or you simply want more stuff, Days Gone Bye looks to be a near mandatory acquisition.