The Walking Dead: All Out War – Boosters Review

You don't get more iconic in the beginning issues of The Walking Dead than Rick atop that brazen steed and Morgan with son Duane in tow. Both of these expansion packs provide key elements to reliving those definitive early days of the comics. They bring a renewed vigor to your table top and add a new dimension to your All Out War skirmishes.

Let's tackle the Morgan booster first since it's the slightly less interesting of the two. This extension includes three minis-Morgan Jones, his son Duane, and another corpse to stumble around the scarred Georgia countryside.

Morgan is a solid add to your group as he's a capable individual. What stands out and solidifies his potential is his ability to act as a protector of both Carl Grimes and Duane Jones. The lovely aspect of his ability to soak damage and defend the two kids is that it smoothly provides incentive for thematic list building. This is a challenge with IP-based games, getting players to stick to pre-built narrative setups while still allowing them freedom and creativity to explore the setting. Tying Morgan's special ability to alleviating that issue is fantastic.

Duane is not a spectacular add in terms of effectiveness, but he does come in as a cheap inclusion. If you utilize him as a utility character and throw some protective gear on Morgan, the combo will prove useful for sure. It’s also nice having a variety of miniatures on the table and there’s something intriguing about the hopeless of the setting butting up against the fragility of the life of a child. You’ll find yourself sinking into that protectorate role and making perhaps poor tactical decisions to save the innocent.

The mounted version of Rick is enticing not only because it's a beautiful miniature, but also because it allows you to dance all over the claustrophobic battlefield. The comparatively insane movement value is most useful when playing larger games that go beyond the 20" squared surface, but even in tight quarters having a solid mode of transportation is enviable. The mare also allows you to carry more gear and it creates a constant pulse of noise. This can be utilized in creative ways to draw walkers towards the enemy flank or pull them away from allies who are in trouble. You can also hurdle traversable terrain which is handy.

What's more interesting is that you could theoretically attach the horse to just about anyone. It has an isolated point value and you'd need to use the Rick on horse model or build a conversion, but the potential there to veer off in interesting directions is appreciated. 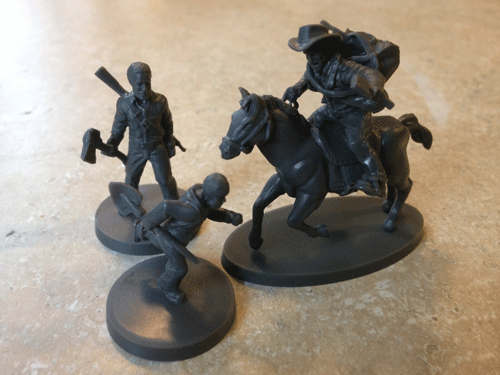 One could criticize the inclusion of a single walker mini in each pack as a way to artificially pad value and justify the price, but I don't think that's the whole story. When playing larger games you need more zombies than the core set provides so this is a great way to boost your forces slowly over time. Variety of sculpts and poses also is much appreciated and gives the decayed crowd a more dynamic feel.

Both expansions feature new equipment cards which are excellent. Standouts include the bolt-action rifle and shotgun with incendiary rounds. Much of the core set is focused around brawls that hit a ceiling at sidearm fire, so it's enjoyable to get a dose of heavy hitters here. Again, these yield greater value when playing in larger scenarios and may be overkill on smaller maps. Still, when you connect with an amazing roll on those red dice and punch a hole in an enemy survivor, it’s incredibly satisfying.

One thing I really enjoy about the Walking Dead: All Out War first wave of boosters is their tie-in to the narrative structure of the game. The first large expansion, Days Gone By, features a string of scenarios that relies on these small figure add-on packs. This may be a turn-off to picking up that full expansion but it's nice to see the expanded content all get featured front and center in the greater story. This is likely a large draw for fans of the comic series and a huge reason to snap these expansions up.

These boosters aren't going to blow your mind or completely change your Walking Dead: All Out War skirmishes, but they will add variety and new concepts that enhance the feel of the game. They remain distinct from characters we've already seen and come with the satisfying baggage of the associated comic. You'll be able to safeguard the kids and ride into Atlanta with Rick itching for a family reunion. If you're a Walking Dead fan then that likely sounds extremely appealing.