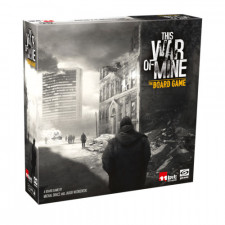 This War of Mine Review

This War of Mine is a difficult game to play and an even more difficult game to review. I donâ€™t mean that itâ€™s difficult in the sense that itâ€™s tough to win - though it is. I mean that itâ€™s difficult to play in the sense that it has to potential to punch you in the emotional gut in the way that few board games do. This War of Mine is a game about war and the people who survive it. Not the soldiers - there are plenty of games to cover that - but the citizens and people who donâ€™t fight a war, but live it.

Each game of This War of Mine opens in the same way. A group of survivors are holed up in a bombed out house, trying to eek out an existence. Each member of this ragtag group can be assigned to various spaces in the house. Thereâ€™s rubble that needs to be cleared out, beds or stoves to be built, and more. In theory a character can take 3 actions per round but these are severely restricted by various conditions. To survive to the end of the game youâ€™ve got to manage hunger, fatigue, illness, and misery. 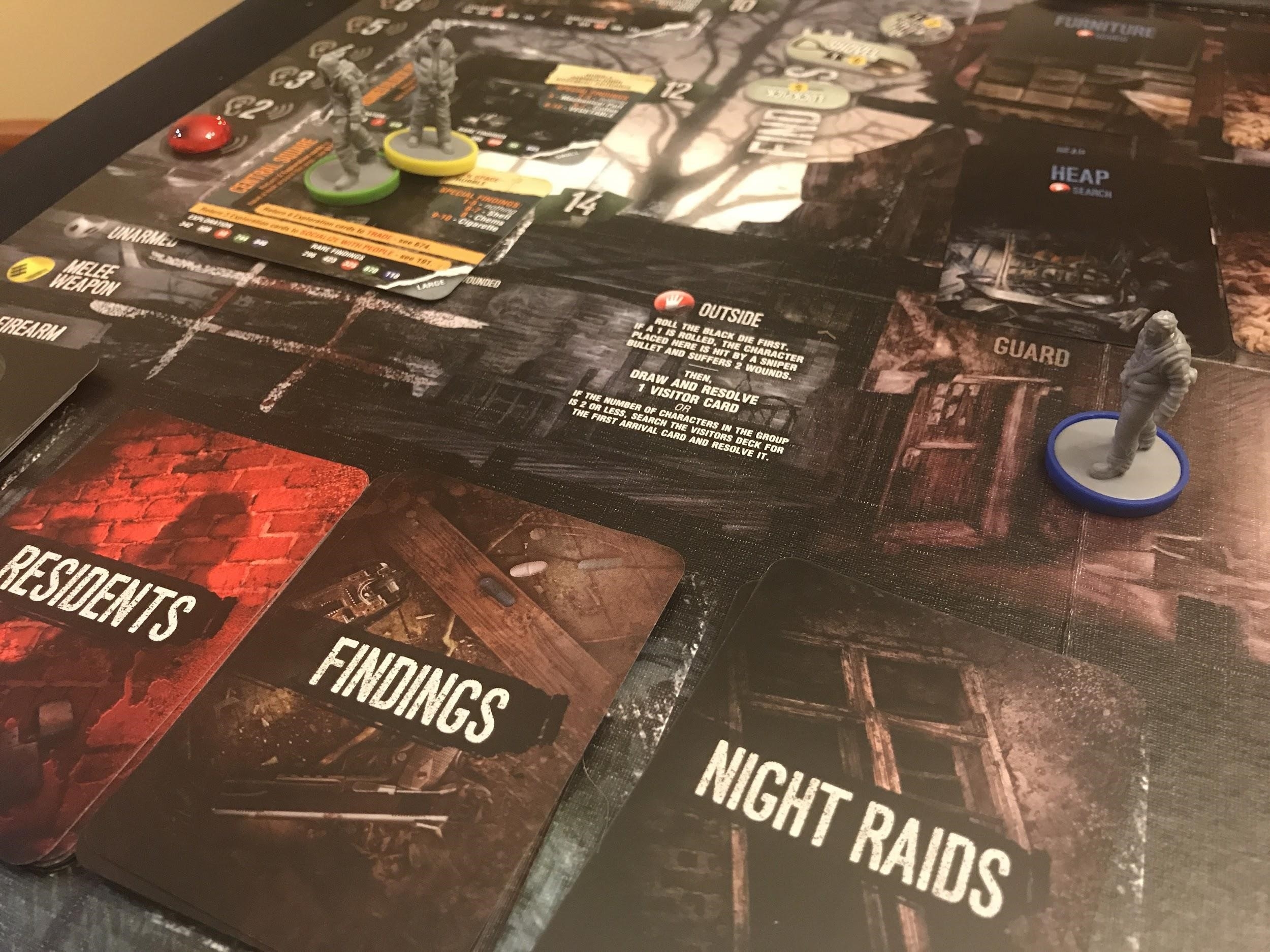 Yeah...misery. This is the first hint that This War of Mine is not going to be a standard worker placement affair. In fact, if the game was just the cooperative affair of assigning your survivors to various home spaces to spend your meagre resources, itâ€™d be pretty boring. On its own, this phase of the game doesnâ€™t do much. However - and this is a big however - these spaces create the context which gives the resource management power.

This is not the first game to punish you for being unable to feed your characters, but itâ€™s the first Iâ€™ve played that gives that character a name and slowly restricts their efficiency until you feed them or they succumb to that hunger and die. Not â€˜put the meeple back in the box deadâ€™ but dead as in dead. The game tells you to read from The Book of Scripts and youâ€™re hit with an emotional passage regarding what happens to Anton when the struggles of scavenging in a war zone lead to his starvation.

Misery works the same way. If you donâ€™t spend some of your precious resource gathering time finding things like books or building rocking chairs, your characters can become too miserable to go on. Iâ€™ll let you use your imagination on what this means but letâ€™s say that This War of Mine does not pull any punches. When given the option to save a small child or leave them on the streets, youâ€™ve got to balance feeding Anton versus straddling him with guilt. But take that kid home and fail to provide for them? It gets worse. 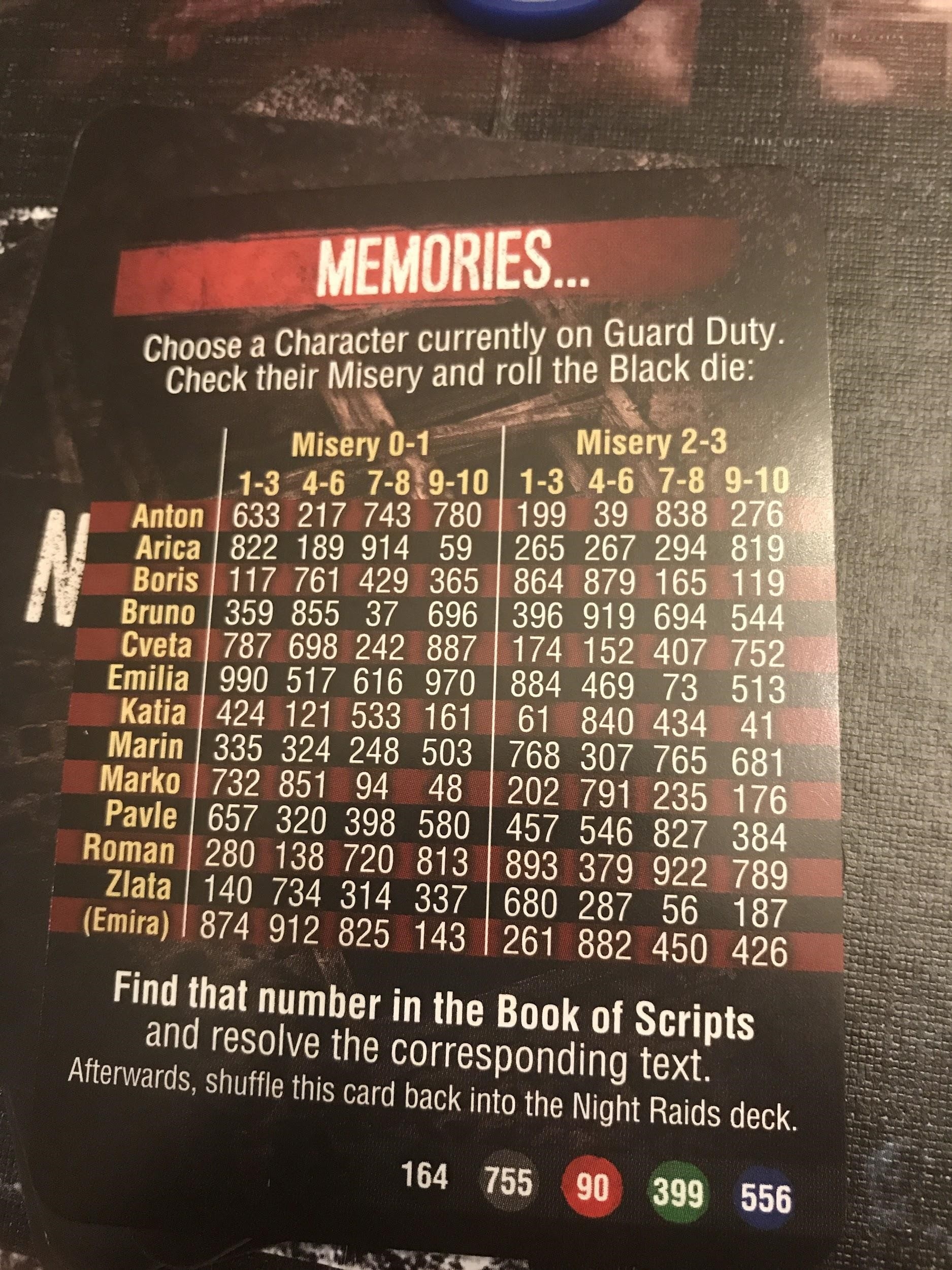 This is what I mean about This War of Mine being a difficult game to play. This is not set on some far flung planet or a mars colony. The Siege of Sarajevo is a real conflict. Real people died, real people lived, and some of the events of the Book of Scripts are based on their accounts. There are roughly 1,000 passages in this book and you truly never know what youâ€™ll find. In one game I found an item that made clearing out my house so easy that I cruised to victory with hardly a status condition token on the table. Far more often were the games I failed to find a weapon before soldiers marched me down the street as bait, or when raiders entered my house at night and took everything from me.

The game puts you in the difficult position of having to take risks throughout. You canâ€™t avoid the city; youâ€™ll never get enough food or water to service. You have to interact with other survivors; they offer the opportunity to trade or commune with fellow people struggling through the conflict. But...you never know when youâ€™ll injure yourself and become a burden to the group, or talk to the wrong person end up with nothing or worse. You play this game to experience and survive, not to win, and thereâ€™s likely a lesson in there regarding the reality of war.

Thatâ€™s what makes this so difficult to review. This War of Mine is the first game Iâ€™d describe as haunting, one of the few that has given me an emotional response besides joy or anger. For that it deserves 5 stars as it pushes a boundary initially set by The Grizzled. But do I want to play This War of Mine again? The resource management isnâ€™t compelling enough to play for its own sake and I canâ€™t be sure Iâ€™ll wrap up a game happier than when I opened the box. I play games for fun, so this is a legitimate concern. I will say that This War of Mine succeeds admirably in translating the video game itâ€™s based on to the table, and - in some small and largely insignificant way - presenting the atrocities of war better than most books. That alone makes it worth playing.