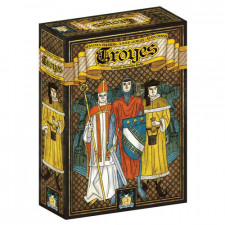 GP: Let me take you back to a forgotten era. No, not the medieval period in France- back to 2011 when dice drafting games were starting to pop up like Starbucks in a strip mall. Among these was Troyes, who wasnâ€™t afraid to be heavier, and a bit meaner, than its predecessors. Now, dice drafting was intensely strategic and Eurogamers rejoiced. Which beckons the question, what are you doing here, Charlie?

CT: Drab medieval artwork. Worker placement-ish mechanisms. Praying in a cathedral. Iâ€™m there, twice on Sunday when that cathedral is the busiest. Yeah, you got me. I donâ€™t know exactly why, but this is one of the very few contemporary medium weight-plus Eurogames that I actually dig. Thereâ€™s a lot going on here and it can be difficult to learn, but once you are acclimated the game is about randomizing input and tossing that detritus into a sawmill to pump out your victory point engine. Couple that with interaction via being a huge jerk and stealing your opponentâ€™s action currency, oh yeah.

GP: Absolutely. Instead of giving you a bunch of spaces and saying â€œAlright, now you have many different ways to acquire resources, which will let you build stuff,â€ Troyes says â€œYouâ€™ll take the scraps I give you and like it.â€ Although the game operates on the surface like many dice drafting games - you gather your dice and roll them, then use them to do actions - Troyes puts a twist on this in several ways. First, you only get as many dice as you have dudes-in-dice-generating-spots (i.e., Bishopric, City Hall, and Palace). Second, before you can even take any actions, you have to deal with the awful and punishing military events, which force you to spend your precious few dice before youâ€™ve even placed any of them out! Itâ€™s brutal- and kind of wonderful. 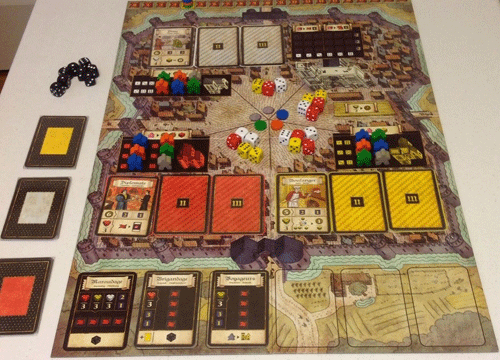 We promise itâ€™s not nearly as boring as it looks.

CT: Yes, one thing I really like about this game from a philosophical design perspective is that its mechanisms arenâ€™t bare. Itâ€™s not so much that the game is layered, but itâ€™s that the layers and spice of Troyes are composed of interaction and clever play. I have a deep appreciation for direct and streamlined games, but Iâ€™m perfectly ok with a design getting heavier and more obtuse as long as the supporting mechanics are not all about heads down optimization. This game certainly has some of that, but the direct blunt force of hijacking your engine and sticking a thumb in your drinking water really sets it apart and has me sitting up more straightly in my chair.

GP: Your mention that Troyes is not really about optimization is a right on. Of course, in any game, you want to optimize your actions. However, Troyes doesnâ€™t feel like youâ€™re trying to do basic accounting with variously colored cubes. Every choice you make with the dice matters and you contemplate them intensely. Actions are limited and money is tight, making for some good decision-making tension. Admittedly though, the openness of what you can do on your turn can be overwhelming. You know the game is asking you to be smart and cunning, which can make it difficult to evaluate your options sometimes. You want to put a guy in a certain spot or use dice for a specific action, but getting there can be a bit arduous.

CT: Thatâ€™s a great point. This is a game that can be agonizingly slow with the wrong players. At its best, itâ€™s played at a brisk pace with players quickly evaluating their strategies and executing their actions. With new players, or those who suffer from chronic analysis paralysis, it can be absolutely brutal. Troyes at 60-90 minutes is 3.5 stars for me, at 120 minutes I donâ€™t even want to show up to the table.

Another factor which makes it less friendly to newcomers is the hidden objectives. Each player being dealt a secret objective that every single person at the table can score is one of the bright spots for me, but it requires constant referencing of the back of the manual if youâ€™re not familiar. Losing sight of those additional scoring opportunities can be a massive blunder when it comes to final scoring. 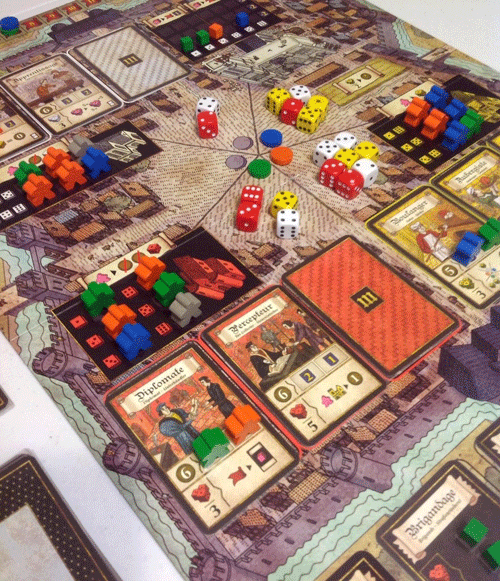 Come for the dice drafting, stay for the funky art.

GP: I really like that each player has a hidden objective that everyone will score. However, it also means trying to track what people are going for is an added layer of â€œworkâ€ that some players will be more inclined to do than others. Honestly, I canâ€™t be bothered to try to figure out what youâ€™re doing when Iâ€™ve got my own stuff to take care of. Iâ€™m not trying to play a meta-level deduction game on top of an already fairly thinky game. Though, this is because I donâ€™t want the game to feel like the slog of rush hour traffic (and also may be why I lose so often!). Still, when the game is clipping along and youâ€™re grabbing dice and stacking your actions in just the right sequence, it can be a pretty rewarding experience, especially once you decrypt what all those sourpuss-looking guys on cards are trying to tell you.

CT: I think that sums it up perfectly. Troyes, at its best, is a very rewarding experience. It gives you that sense of accomplishing due to building an engine of sorts, and it keeps you on your toes with some direct screwage and conflict. It checks enough boxes that its weaker elements are surmounted by its stronger qualities. While I donâ€™t often go reaching for a mid-weight contemporary Euro, when I do it's going to be Troyes.