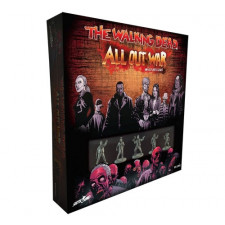 The Walking Dead: All Out War - Core Set Review

Let's face it; producing a top-shelf Walking Dead game is hard. You have tons of fans split across two mediums, a genre that's as maligned as it is popular, and a spirit that is often misunderstood and difficult to grasp. The previous table top games centered on this IP have all struggled to capture that spirit and really nail the essence of the theme. Mantic games have picked up the ball and are running towards the hoop like Shaq stomping on the lollipop guild.

This starter set is relatively robust for the price. It comes with some excellent pre-assembled minis that look beautiful. The paper map that delineates the 20" square surface is quite functional, and the 2D scenery is solid. It gives off a very X-Wing vibe with identical packaging and a similar single standard scenario that has some solid replayability and utility.

In addition to a dozen walkers we have living and breathing versions of Rick and Carl Grimes, as well as four generic survivors who have names and backstories that you likely won't care about. The goal here is to build a group of a specific point value and outfit them with starting gear like pistols and baseball bats. Some equipment is unique and only wearable by a specific person, like Carl's Sheriff hat. There are some synergies and nice combinations of characters and items that add a touch of oomph to selection, but it's nowhere near as bogged down or heavy as X-Wing in its current state.

Each group squares off in a two player affair where you attempt to recover equipment tokens from around the small map. You will need to get a set number before the other group, or eliminate all of your enemies. This world view of direct conflict and high stakes is right out of Kirkman's dark mind. The fact that this isn't a cooperative game but one of bleak outlook and constant peril is spot on. It sets the tone for what's to come. 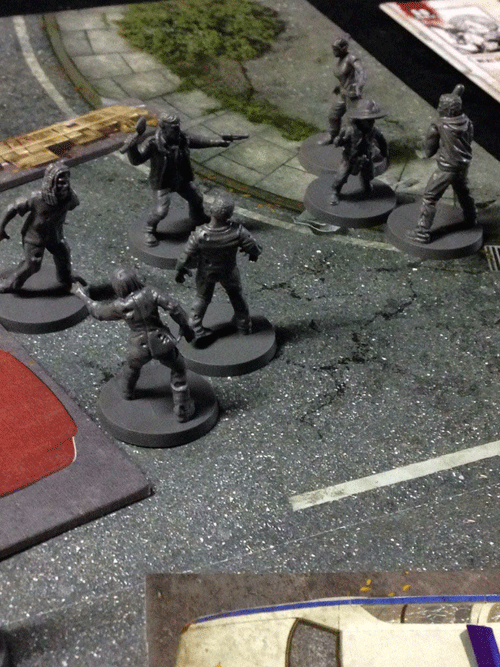 What really solidifies this game as an exceptional release is nailing that Walking Dead soul. It provides mechanical support to push the tension of play and paint an atmosphere that mimics your emotional state while reading the comics. This evocative approach propels a relatively straightforward miniatures game into something to truly behold.

The threat track is the fire-starter for the magic. This dial ramps up throughout play from events and characters entering combat. Its steady march towards conclusion feels inevitable and it captures that dour pressure splendidly. The higher levels jacks up the atmosphere by causing increasingly worse events to appear as everything begins to spiral out of control.

When All Out War gums up your plans and establishes an atmosphere that is autonomous, that's when it's at its best. Reminiscent of the underrated miniatures game All Things Zombie, characters may panic and react in unpredictable ways. When fights break out the unexpected will happen more often than not. You can be bitten and infected, slowly turning towards the cold dark reality of your end.

These events will spur reaction as you try to wrestle control back from the environment, fighting off the walkers that function as dynamic terrain. You'll have games where Rick takes a hatchet to Carl's arm, literally trying to remove a limb to stop the infection. Sometimes Carl won't make it and you'll have to put his zombie carcass down, other times he’ll pull through but will have one less equipment slot to work with as he’s crippled. Carl may have it rough but the audience will eat it up.

The Walking Dead: All Out War succeeds because it provides the necessary tools and framework for players to produce their own distinctly Walking Dead narratives. Much like Star Wars: Rebellion, you will operate within some restrictions, laws which enforce the source material and atmosphere, but the individual slices of narrative and outcomes are your own story.

At its height this game is so fantastic that it easily allows you to overlook the flaws of a single scenario and limited selection of characters. You'll want expansions as soon as you take to the battlefield and your wallet will be crying; more importantly though, you'll be smiling.