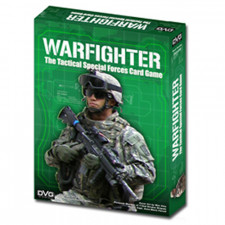 Dan Verssen has produced a number of quality wargames under his DVG imprint, but unlike most series of games are as much about managing pilots and budgeting ordnance as they are about the actual execution of the mission. Heâ€™s done a number of card games with conflict settings over the years as well and the best one that he has come up with to date combines both that high level resource management angle with a card play execution that calls to mind the classic Up Front. But one thing really sets Warfighter apart â€“ itâ€™s one of the only games on the market that has a modern Special Forces operations setting.

So that means that this game features plenty of things that anyone that plays military shooters such as Call of Duty or that watches the news will be familiar with. The game is co-op, pitting US Special Forces troops against South American drug cartels, Middle Eastern insurgents, or the military forces of an unspecified Middle Eastern country. At the outset, youâ€™ll choose a mission type and an objective which sets the parameters including available resource points, game length and other factors. Using those resource points, you and other players will get to rifle through an assortment of soldiers, gear, skills and of course lots of guns and outfit your group. There are also NPC and â€œSquadâ€ soldiers that you can bring along. They donâ€™t get a hand of cards like a standard soldier does, but youâ€™ll appreciate their extra firepower. And youâ€™ll be happy to have them along as additional targets if things get hairy.

And odds are that things will get hairy. As the mission progresses, players will lay out location cards starting from the mission card and these frame the action. They establish how many hostiles appear, when they are reinforced and other variables that reflect the difficulty of traversing the terrain or level of cover available. Thereâ€™s a huge range of South American and Middle East locations available, and these contribute to a sense of developing narrative that the game effectively creates.

Each soldier generally has two actions to perform which include playing cards (with most costs paid by discards from hand), resting to refill the hand, shooting at hostiles and reloading when your magazine runs dry. There are also stealth attacks, explosives, structures, support from snipers and other details that impart a robust sense of modern warfare. 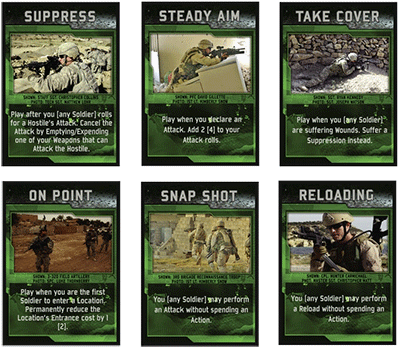 It all comes down to moving through terrain cards and battling any hostiles that appear which range from simple gun-thugs to angry mobs and on up to highly trained RPG teams. And when they are drawn from the hostile deck, some of these cards screen others so that you canâ€™t just run up and double-tap a leader. The Hostiles randomly select a target from the soldiers in play and are completely automated with no real AI to speak of.

Every soldier and Hostile card has chart indicating its to-hit numbers at various ranges, and the combat roll is a D10 for a single-shot weapon (or 2 or 3D10 for firing burst or automatic) plus a D6. The D10 determines if you hit and also if you run out of ammo trying to do so, typically if you roll a one or a two on it. The D6 determines if you beat the opponentâ€™s cover. If both succeed, itâ€™s EKIA. If only one succeeds, a suppression marker is placed on the enemy card, preventing them from firing in the next Hostile round. Itâ€™s a simple system that encourages players to exploit the advantages of a sniper working at long range, maybe even a card or two back from the main group, or of a shotgun-wielding CQB specialist that rushes right into an enemy building.

Like a lot of Mr. Verssenâ€™s games, it has something of a learning curve and it looks quite bit more complicated than it actually is. Once you get a handle on how the charts work and the strategies available among your soldiers and their equipment, Warfighter becomes fast playing, exciting and rich with storytelling potential. It is very dicey and very unpredictable, but I especially like how it generates a fluid, evolving plotline as you play. And that plotline, it seems like, always turns out to be â€œBlackhawk Downâ€.

Itâ€™s a pretty tough fight to get to the objective and complete the mission, even against the untrained forces of the cartels. Youâ€™ll be cruising through a mission, handily dispatching tangos and with plenty of ammo to spare and then suddenly it will all go pear-shaped. Youâ€™ll get stuck in a location, without the cards to move or with an enemy that increases the cost to enter. Or both. Firefights extend multiple rounds as shots do not find purchase and you start burning through magazines. Then one of your squaddies takes a hit. Suddenly, your cakewalk is a slaughterhouse and then they bring in that RPG team. 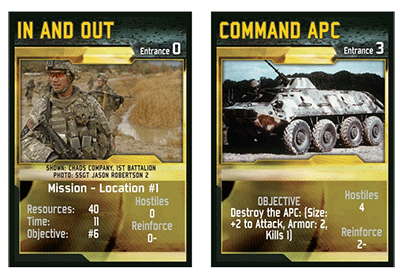 Warfighter is fun even when your squad is on the ropes. The co-op angle works nicely as players coordinate their abilities, weapons and card play to maximize their effectiveness. I like how the game uses an XP mechanic to give the players a spendable resource that allows them decision points throughout the game. Many cards offer an â€œup gunâ€ effect if you spend an XP point on them and others, support cards in particular, require an upkeep cost in XP. The card play also offers plenty of opportunities for combinations, desperate top-deck saves and tough decisions as to whether to play a card or hold it for what comes next.

Itâ€™s also terrific solitaire, especially since you can effectively play with one hand and use the NPC and Squad soldiers to fill out your roster. Of course, you can also play multiple hands. But this is also the kind of game that plays best with a couple of other people so that everyone can cheer and groan together.