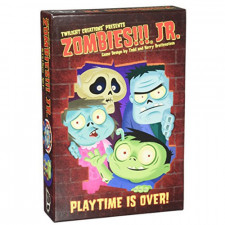 Twilight Creations got in the business of making zombie games long before everybody else jumped on the undead bandwagon. I remember my friend Kurt buying Zombies!!! on the same FLGS visit where I bought Carcassonne. I opened my box and got some cardboard tiles and a pile of now-ubiquitous meeples. He opened his and got a hundred plastic zombies. I felt ripped off. In terms of gameplay, Zombies!!! was one of those "comic shop" style games that really wasn't that good mechanically and even when it came out it felt grossly outclassed by the European games at the time but it had a certain appeal in its simplicity and playability. The latest edition of the company's flagship product is Zombies!!! Jr., and as you might expect it trades in the shotguns for "Narf" guns and the gory violence for sending zombies to time out. Grandma shows up with her rolling pin and you can ride a big wheel to the helicopter if you get lucky.

All of the visual assets have been made kid-friendly, even the zombie figures. The hero pieces look an awful lot like Earthbound's Ness. But it is still essentially the same Zombies!!! game so if you hate it already, you'd best move right on along. It's all here- the roll-and-move, the take that cards, picking up tokens in buildings, laying out city tiles, and scrambling for the chopper at the end. As has always been the case, the rules are quite loose and accept homebrew variations and adjustments as you see fit, which is especially good when you are playing with this version's intended audience. 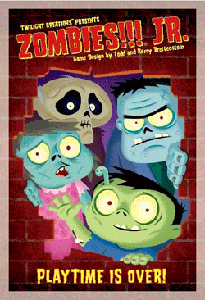 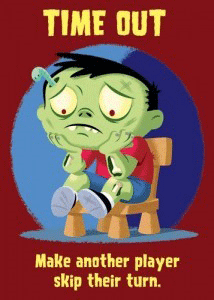 No gory headshots or chainsaw dismemberments here. The fate of the undead is the ignominy of time out.

There are three options to play within the rules, but the co-op mode turns out to be something of a bust- mainly because most of the deck of action cards negatively affects other players. So you've got to toss those out for it to work at all, and then the fun of the game is also impacted because keeping others from escaping is kind of what makes the game. Of course, younger kids in particular might not appreciate mom and dad plunking down a card that waylays them at a particularly devastating time. There is also a team play option, which I think is the way to go over co-op because it preserves the adversarial action and the traditional everyone for themselves style.

I was actually pretty excited to try this out with my kids (ages 5 and almost 7) because they love zombie stuff. They liked the look of the game and were psyched about it. But it actually fell kind of flat, and I think they have been somewhat bored by it by the time we got to the end each time we've played, even though I've tried to pump it up with ad-hoc rules to increase their engagement. I've not been particularly invested in it myself because I can't help but compare it to more recent titles, Zombicide: Black Plague in particular. Talking to River and Scarlett after our last game, both agreed that they would rather have played the very excellent Ghostbusters: Protect the Barrier instead. I'm afraid this game has simply been outclassed by more recent designs. But my kids are a little more game-savvy than most their age.

You get a lot of those green "zombie tykes", as you'd expect from a Twilight Creations product.

I still think there is value in Zombies!!! Jr., and it would be the only version of the game I think I'd want to play now. It is the only zombie game on the market that is appropriate in terms of content for the very young, and I think that larger groups of kids- like five or six- might really get into this. It's also a low cost option, coming in at four to five times less than a Zombicide title. And there are no expansions or add-ons required. All of that means that it's a great choice for a birthday present or other special occasion gift for a zombie-loving kid- especially if they get creative and make it their own game with house rules, miniatures painting, or other customization.