"The Borg are the ultimate user. They're unlike any threat your federation has ever faced. They're not interested in political conquest, wealth, or power as you know it. They're simply interested in your ship, its technology. They've identified it as something they can consume."

The Borg Cube is one of the most formidable technologies known to the federation. Its lack of identifiable function spaces - such as a bridge, engineering, or personnel quarters - reveals the hive-like Borg collective consciousness and its drones. It not only carries "smart" weaponry that adapts, but it also can analyze an opponent's weapons systems and adapt defenses within seconds.

On stardate 43989.1, another Borg Cube - sent to assimilate Earth and its technology - traveled to the Alpha Quadrant using a transwarp conduit to make its journey and was briefly led by Locutus, the assimilated alter-ego of Enterprise Captain Jean-Luc Picard.

A third cube tried to conquer Earth by altering the timeline in 2373, but was destroyed with concentrated weapons fire by a Starfleet armada. It ejected a smaller, spherical ship, a Borg Sphere, which created a time vortex that allowed the sphere to travel back in time in an effort to stop humanity's first contact with an alien species. This effort was also thwarted, by Picard, his crew, and the Enterprise.

This is not a stand-alone game. A copy of Star Trek Attack Wing: Miniatures Game Starter Set is required to play. 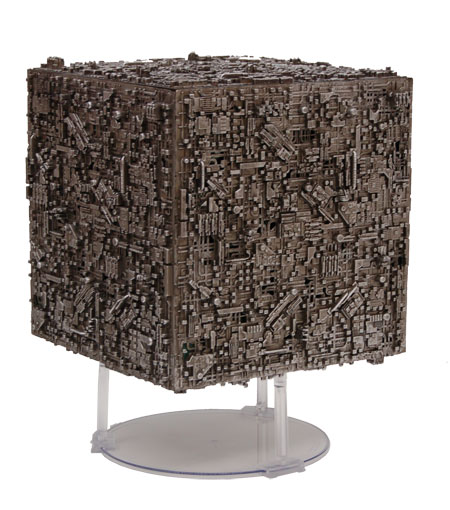