"Think of it. Five years ago, no one had ever heard of Bajor or Deep Space 9 and now, all our hopes rest here."

The gateway between the Alpha and Delta Quadrants, Deep Space 9 is a pivotal and strategic federation space station. Now players can bring Deep Space 9 to their Star Trek: Attack Wing games with this all new version with new game stats and new premium paint jobs!

Deep Space 9 (DS9) is an outpost situated near the mouth of a stable wormhole on the far reaches of explored space. Although the federation commands DS9, the station actually belongs to the inhabitants of nearby Bajor, who requested Starfleet's protective presence after Bajoran freedom fighters put an end to the brutal Cardassian occupation of their world. Initially, Starfleet's mission was to protect Bajor and the station from any hostiles who ventured into the area. But with the discovery of the nearby wormhole - a shortcut through space that leads directly to the uncharted Gamma Quadrant - this mandate has expanded exponentially, as the region becomes the gateway to all manner of visitors, both friendly and extremely hostile.

This is not a stand-alone game. A copy of Star Trek Attack Wing: Miniatures Game Starter Set is required to play. 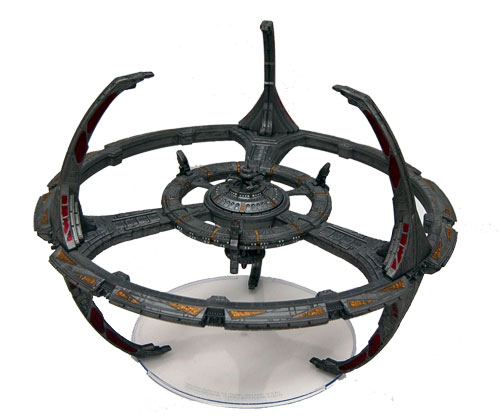