Up to 85% OFF Select Board Games | Shop Now
Tweet

A Game of Epic Exploration and Adventure

A contested region of space accessible through a known wormhole has drawn the attention of powerful forces throughout the galaxy. Both the Federation and the Klingon Empire, who share a delicate alliance at this time, have recently built outposts in the region. But now news of grave troubles brewing in the region has alerted both the Klingons and the Federation to investigate immediately. As the task force approaches the wormhole, each captain considers the challenge of the coming mission.

The Star Trek: Frontiers board game is an epic game of exploration and adventure. Take control of one of four powerful starships and play a variety of competitive and cooperative scenarios as you compete to explore this new region of space. Conquer Dominion Starbases and gain new technologies, explore new planets and face new species, or assault the Borg and recruit new crew to help you reach new heights! Level up as you progress through each mission and carefully build your Action deck and Captain's Skills for the mission at hand. Each decision you make will impede or improve your reputation in the region, as you acquire new technologies and position yourself as the Captain best suited to accomplish the mission. After 4 rounds of exploration, diplomacy, and combat, only the Captain with the greatest impact on the region will be declared the victor! 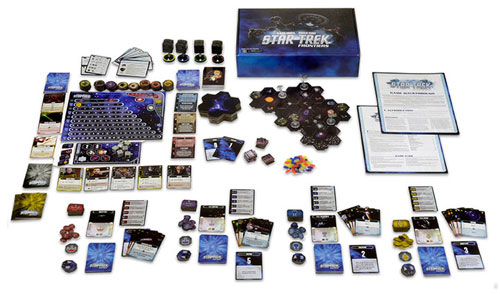