Dark Heaven Legends is the premier 25mm Heroic Scale fantasy line for miniature painters, roleplayers and wargamers. The Dark Heaven line has produced over 1,300 fantasy miniatures designed and crafted by the top miniatures sculptors in the world.

The Bones material is a polymer plastic. It is light-weight and slightly flexible, and is very durable. You can paint a Bones figure straight out of the package, and that paint job will also be pretty durable. Bones figures are as detailed as metal figures, for a much lower cost. Bones miniatures are produced with integral (built-in) bases, but it is easy to cut the miniature off of the base if you prefer to put it on something else. It is also easy to cut the figures apart to convert them into different poses or change weapons.

Miniatures are supplied unpainted. Preparation and assembly may be required. 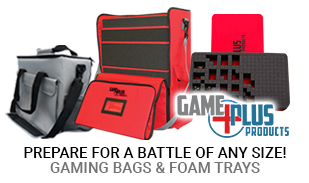 Hefty, detailed translucent miniature; usable unpainted or with a bit of touch-up.
Unlike typical Bones minis, this is cast in a TRANSLUCENT red plastic that is slightly more rigid and heavy than the white "Bonesium," but not quite as rigid as the "grey Bonesium." The one (minor) flaw of this model is that, since it's heavier than the regular Bonesium plastic, it's particularly top-heavy, so with its dynamic "contraposto" pose it tips over in one direction a little too easily if the table is bumped or the surface isn't perfectly level. This is easily enough solved by mounting it on a larger base (~50mm diameter) in such a way as to place the center of gravity more firmly in the center. Just by doing that much, the model is pretty much ready to go, and makes for an imposing-looking elemental with an aesthetic balance between vaguely humanoid form ("arms" and "head") while still looking like a magical manifestation of a force of nature.

The model is thick enough that it looks fairly solid red from most angles, rather than "fiery," per se, but a nice effect can be achieved by painting recessed areas near the base with some thick white acrylic (as a base coat, applied by brush directly to the plastic), then going back and painting a gradient of white-to-yellow-to-orange-to-red to blend upward into the red of the rest of the model.

Another possible use is in a diorama, if you put an LED under the base. (I tried this with an LED light from a Halloween prop.) It creates a neat, fiery effect.

In addition, you COULD simply repaint the whole model opaque, as there is sufficient sharp detail to the leaping flames that it would make for an impressive model, but that loses the visual novelty of a translucent model.