Can you save humanity?

As skilled members of a disease-fighting team, you must keep four deadly diseases at bay while discovering their cures.

You and your teammates will travel across the globe, treating infections while finding resources for cures. You must work as a team to succeed. Pandemic is a cooperative game, all players win or lose together.

The clock is ticking as outbreaks and epidemics fuel the spreading plagues. Can you find all four cures in time? The fate of humanity is in your hands!

1. Treat diseases before they spread

2. Meet up to collect cards

3. Discover the cure for the disease

Every turn, new Infections appear and Outbreaks might occur... 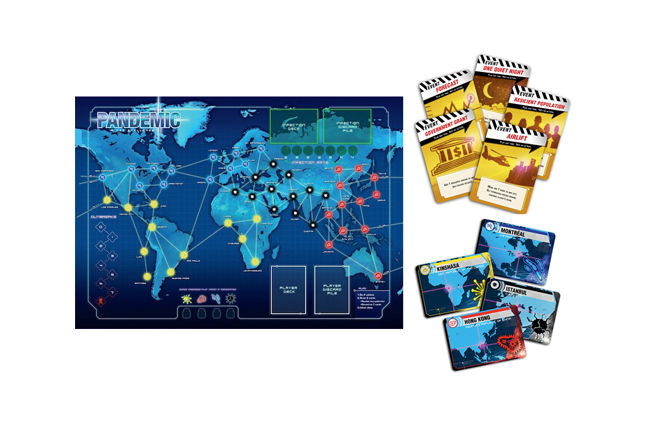 Please save the world!
Do you think you could get nervous but just playing a board game? Do you believe there is no challenge in playing a game where everyone is cooperating? Well, if that's the case, Pandemic will surprise you. You'll be fighting together against deadly diseases spreading across the world, and each turn things get worse. Avoid outbreaks and decide how you'll find the cures while keeping diseases at bay. You can choose different levels of difficulty. This is a great game to play with several players!
Review by Enrico on 5/27/2017
One of the best co-op games of all time
Pandemic is likely one of the best co-op games of all time, anyone I have gotten to play it is hooked first time playing
Review by Michael on 7/25/2016
overall one of the best games in my opinion.
to me this is as close to a perfect game as you can get. the only negative critique i can come up with is sometimes it's difficult, but personally i like difficult games and even more so when it's a co-op.
Review by Chris on 6/3/2016
This is the one
If I were to pick only one board game to play for the rest of my life, this would be it. I have all the expansions, but haven't even gotten around to all of them, because the base game is so fun. Any number of players can join, and because of that co-op aspect, no one has a chance to be bored-- you are all trying to make the most of every turn. Find brutal player combos to maximize leverage of special abilities. Have fun saving the world, or die trying. ;)
Review by A on 12/16/2015
BEST game ever
In my humble opinion, Pandemic is my favorite game of all time. If your getting into co ops or into the hobby in general, this needs to be one of if not the first game you buy. I have played Pandemic dozens and dozens of times and it still holds up every play. There are tons of expansions to enhance your gameplay is desired. This is an absolute no brainer to buy if you don't have it or have played it.
Review by Richard on 11/7/2015
terrific game
Pandemic has a nice, easy to learn rule set, but the real challenge is how the game can change with the flip of an infection card. It is an excellent cooperative game that enables you to formulate plans for how 1 player can set up something for the next player, and that player can set up the next, but then the infection cards force you to reconsider your plan. There is a trade off effect as fewer players mean more chance of getting enough cards into 1 player's hand to turn in cures, but more players means that more can be done on the board.
Review by Will on 10/12/2015
Great family game
This game is well balanced and easy to learn. The learning curve was about 15-30 minutes. I have kids ages 8, 12, & 14 and they had no problem learning the game. It was a fun new challenge working together against the board rather than against other players. Each player has to work towards the team goal or you will lose. Pick one up today!
Review by Christopher on 10/2/2015
Believe the hype - Pandemic is a winner
Pandemic is the popular cooperative board game that everyone has talked about. Well, believe all the great things they say about it.

I've lost games of Pandemic about as often as I've won, and I've never had a bad game. This games puts you and up to 3 other people (more with expansions) against diseases that are threatening to overtake the world. The only way to win is for you and all other players to cure the diseases present. Develop all four cures, and you win.

The mechanic in this game is simple and elegant, and the one thing that sucks more life out of you at the end of every turn is how the diseases spread. Some can cause outbreaks, and outbreaks can cause other outbreaks in chain reaction fashion. Epidemics can wreck your chances at eradicating disease. All in all, it's a tense, slow burn that humanity many never recover from.

And it is so. Much. Fun. Get this game. Introduce your non-gamer friends to it, and they will be hooked.

Review by Zach on 10/1/2015
Quite possibly the best cooperative board game available.
One of the few games in my collection with nearly endless replay value. A great cooperative game and probably my favorite in that genre. Pick up the Pandemic: On the Brink expansion if you to be able to make the game nearly impossible (I like a challenge in my coop games).
Review by Mark on 10/1/2015
Most fun to be had losing repeatedly!
I have to confess that my group has had terrible luck of the draw, even with several different shuffling methods. This game can be won, sometimes it isn't even too hard, but it can crush you in one or two turns like the fist of an angry god. The thing is, we still have a blast every time!

This is a cooperative, turn based game that relies on shuffled decks to control the flow of the action outside of player choices. There has been real tension at the table every time we've played and I feel like it simulates the "race against the clock" feeling better than one of those epidemic thriller flicks can! This game is a must own for any real board game collection!

Review by Mike on 9/27/2015
Fun Co-op
A challenging game were you and a group of friends work together to cure 4 separate diseases that are ravaging the world. Very fun game that your more likely to lose at then win.
Review by L on 9/26/2015
The world is doomed
One of the toughest board games i have played and even better no one has to play the bad guy! Play against the clock, with 3 ways to lose but only one way to win. The long and the short of it is if you win this game the first time go back and re-read the rules you probably did something wrong. It takes a few times playing to grasp how bad things can get in a hurry and recognize the danger. Once you do it is fun working as a team to stay ahead of the cascade of bad circumstances to come.
Review by Larry on 9/13/2015
Very competitive game which makes it that much more fun!
This game is solid. Players team together to cure and eradicate diseases across the globe. The players may adjust the difficulty and the challenge of the game by increasing the frequency of outbreaks. Every game is different, because the team's capabilities, thus strategy, changes each time.

The pieces and board are good quality but basic, with diseases represented by little cubes, and the players represented by plastic pawns. The board and cards are fine - no real "wow" factor though. It's an excellent family/team game, as everyone plays on the same side.

Review by Winston on 9/13/2015
So close to winning...
Can you have a cooperative game that you lose (every time so far) and still have a lot of fun playing? Yes! This game has so much to offer. The only time my group has won, we realized we had a rule wrong. The last time we played, we had one single city left with one single virus and couldn't reach it before we ran out of time. Fun through frustration. This one has it!
Review by Walt on 2/14/2014