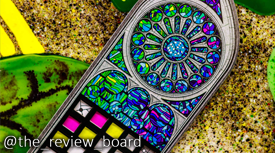 Introducing Century, a series of exciting and wonderfully addictive stand-alone, mixable games. Each title is set in different centuries, from the 15th to the 17th, and depicts the major trading systems and routes of these eras. While quick and easy to learn, the century trilogy will fully engage even the most strategic players.

Discover the beauties of the spice trading road and its colorful markets with the amazing artwork by international renowned artist Fernanda Suarez. Wrap your mind around simple and pure game mechanics combined with a touch of deck-building system that lead to endless strategies and decisions.

- Explore the markets
- Trade and improve your offerings
- Sell and score!

Neat Game but One-Trick Pony
This is a nice game about building up an engine of cards in your hand to cycle through to earn point cards. There is some interaction with timing of completing goals and stealing cards (if you realise what your opponents are planning). However, this is really a one-trick pony type game. There are no end game bonuses or goals. There is simply get enough VP cards than count up the VP. I would advise pass this on for Eastern Wonders, which has a bit more going on (in a good way) with the route-planning and power-collecting adding some much needed variability.

It is also disappointing that the next game in the series isn't available as just an upgrade pack, meaning you need to buy all the cubes, bowls, etc. again for more cost. Be prepared to pay out a big-box game price if you want to combine two games together.

Review by John on 8/5/2018
Spice things up by adding this to your collection
This game "spices" things up. Plays smooth and is just fun. Most other online reviewers say that if you like splendor then you will like this game. Some call it the "splendor killer." I do like it more than Splendor, but I think that they are definitely different games. But I think that the over all concept of trying to collect cards to be able to produce a lot is the same as Splendor. There is a resource engine building aspect to the game.

One friend said splendor is like buying discount or coupon cards where as century spice road is like taking advantage of foreign exchange rates..... and I think that's a pretty accurate analogy. One online reviewer said that this game should be up for nomination of some type of award and I also agree with that. But I jut started playing this game and it's kind of hard to figure out the actual value of the cards that you pick up to trade. There's 4 different spices that you can get that's tiered.... yellow cubes are cheapest, then red cubes are one level up, green cubes are the next level, and brown cubes are most expensive. Each player can carry up to 10 spices/cubes at any one time also kind of like Splendor. The person that buys 5 or 6 victory cards triggers the end of the game.... depending on who triggered the end of the game each person that hasn't had the same amount of turns as the player that triggered the end of the game gets to go one more time also just like splendor.

But again the trade cards that you pick up are hard to tell what is good unless its obvious. Like there are trade cards and then there are also production cards which are the ones that are easier to tell that they are more valuable. There is a production card that gives you one free brown cube and is totally OP. And the one that gives you 4 free yellows is OP as well.

But the one rule that makes this game great regarding the trade cards is that as long as you have the resources for it, you can do the same trade multiple times. For example if a trade card says you can trade one yellow and one red to get one brown then you can get two brown if you have 2 yellow and 2 red to convert into the 2 brown.

Anyways, this is a great game that I played at a game night and instantly wanted to get a copy for myself. Especially since it sold out from the first shipment to stores and recently came back in stock. If you're not getting this for yourself, it's a great present for someone else. I'd get it before it sells out again.